Stealth Altruism: Forbidden Care as Jewish Resistance in the Holocaust 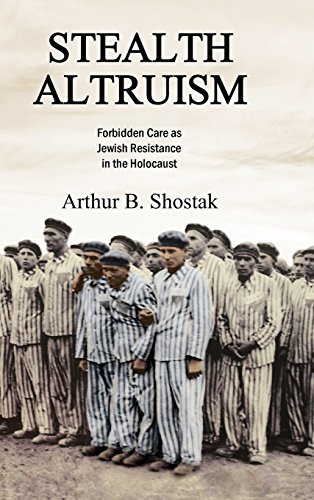 “One of the greatest contributions of Judaism to the world is doing things for others. It is the reward of our lives.”
—Viktor Frankel, Holocaust survivor, author

Nazi Germany’s effort to exterminate the Jews of Europe has been part of Holocaust education in schools, colleges, and universities throughout the free world. It has been the topic of a wide variety of books (nonfiction and fiction) and films. Through these, we learn in detail about the various evil acts of the Nazi Reich that befell innocent civilian victims.

Another reality of the Holocaust is equally important, but rarely taught. Few Holocaust courses, books, or films focus on the many courageous people, Jews and gentiles, who risked their lives to help prisoners in Nazi concentration and death camps. All such acts of forbidden assistance were punishable by death.

Despite the ubiquitous punishment for helping another prisoner, such aid was rendered tens of thousands of times—with no expectation of any positive result for the person coming to the rescue of other prisoners. Quite the contrary, anyone caught helping a fellow prisoner could assume that they would experience a swift and painful death.

Author Arthur Shostak calls these people, “Carers.” A Carer risked his or her life to help someone in need, without any expectation of reward. Their reward was instinctive and religious. Yet these brave people, mostly Jews helping other Jews, existed and constituted some the bravest acts of WWII and the Holocaust.

To Jews, the Talmud teaches that a person should be altruistic. The desperate need for such behavior could not have occurred with greater impact in any other place or time. Such desperation was the uniquely Jewish reaction to watching their synagogues burned, their rabbis assaulted and murdered, and their families and friends tortured, incarcerated as slave labor, and finally murdered when they were no longer useful to Germany. As part of a larger plan to exterminate the Jews of Europe, these prisoners were overworked, starved, made sick, experienced medical experiments without anesthesia, and were the subject of near-constant beatings.

In Stealth Altruism, Arthur Shostak explores the various ways that brave prisoners, Kapos, and even a few members of the SS with a conscience aided and assisted victims of Nazi oppression. To reach this point in a Nazi concentration or extermination camp, most victims had survived ruthless torture, lost their family, homes, and possessions, were forced to live in squalid ghettos, and remained alive only as long as they had value to Germany as slave labor.

Somehow, many of these people felt it extremely important to fight Nazis by assisting other prisoners in meaningful but forbidden ways. Professor Shostak defines this behavior as stealth altruism. Here we find concentration camp prisoners, mostly Jewish, who were destined to be gassed and cremated or shot and buried (often alive). Instead of seeking their own needs, many such prisoners risked their lives to aid other prisoners too weak or disabled to survive the rigors of hard labor, starvation, sickness, and Nazi brutality. Their stories constitute the bulk of this excellent textbook.

This stealth altruism often arrived as extra food, medical assistance, support with standing through roll calls, and countless other acts of forbidden care that helped prisoners stay alive. In none of these instances were prisoners forced to help other prisoners. They became Carers because their conscience demanded it, or because helping someone to survive one more day might become their last positive act as a human being.

Nazis assumed that this barbaric treatment of Jews would break them into mindless, depressed automatons, slaves to be broken to do the will of the Reich. But Nazis failed to realize the power of helping and healing to devout Jews. For many Jews incarcerated in Nazi camps, this was an opportunity to help people in desperate need. The Carers followed Talmudic guidance and aided fellow sick, oppressed prisoners. It should also be noted that many gentiles also saw this as an opportunity to help those in desperate need.

The human capacity for evil is strikingly ubiquitous, appalling, and poignant. We recognize that millions of innocent, unarmed Jewish families lost everything that they owned and everyone that they loved. Healthy prisoners became overworked, dying slaves for the German war machine.

Jews and others considered unable to work by age or infirmity were transferred to and murdered immediately upon arrival at a Nazi death camp. This included virtually all children, their grandparents, and the disabled. Mothers unwilling to allow their child to be ripped away by the SS were gassed or shot with the children. The remaining Jews (about 10%) became slave labor.

As slaves in Nazi concentration camps, prisoners were subjected to hard labor, starvation, sickness, medical experiments, and nearly constant roll calls in all types of weather. The psychological damage was worse. Jewish adults who survived selection at a Nazi death camp were often transferred to a labor camp under the brutality of the SS, whose Draconian rules reduced the prisoners to walking skeletons performing mindless work supporting the German military.

In the end, fathers fought sons for a scrap of bread. That’s what starvation and slave labor will produce physically; while psychologically the prisoner was reduced from a human with a name to a number, unworthy of recognition. Living for months or years in filth, hunger, slave labor, neglect, produced the constant threat of disease, beatings and death. This was on top of the knowledge that their wives, husbands, fathers, mothers, children, and grandchildren had been sent to gas chambers upon arrival. The emotional distress must have been more than equal to the physical tragedy.

In concentration camps, prisoners could help each other in many ways that were unavailable in Nazi death camps. In relocation or transfer camps, like Theresienstadt, Jews created schools, libraries, an orchestra, adult education, and theatrical plays; They also engaged in forbidden religious services, produced newspapers, and organized their own leadership cast; they had secret bar mitzvahs, weddings, and religious holidays in hiding.

Jews created their own values and structures within a Nazi concentration camp often to help the children, to prevent them from having too much free time in which to recall murdered parents and grandparents. Of course, these acts were mostly forbidden by the SS. So they existed surreptitiously. This required valor and the willingness to risk certain death if caught. Such furtive examples of courage will forever mark the Holocaust as the event in which Jews lost their freedom, but not their identity.

Nazis were deeply committed to eliminating Jews and any remaining Jewish distinctiveness. Their goal was to eliminate the prisoner’s dignity, self-esteem, their character as a Jew and as a person. Carers were dedicated to fight this effort, to assist any prisoner, Jew or Gentile, and to help them maintain an identity as a valued human being.

Jews and others incarcerated in brutal Nazi camps still desperately searched for meaning in life. Acts of stealth altruism allowed those Jews to continue to feel productive, hopeful, helpful, and supportive. That the acts were punishable by swift death eventually became no barrier at all. Perhaps many such Carers understood that they would be murdered as soon as their slave labor became unnecessary or when their health and strength finally faltered. Thus their last voluntary act could be one reflecting kindness.

The author’s writing is clear and moving. This book is clear, cogent, haunting, and accurate. Shostak uses references that are impeccable and varied. His focus upon forbidden acts of kindness is equally important and necessary for the world to learn. Still, like many Holocaust books, it leaves the reader longing for something more substantial. Perhaps the addition of some pictures, maps, graphs, or diagrams would have helped.

Shostak concludes that the depth of optimism and altruism exhibited in this work constitute “a 21st century moral obligation.” Even as we understand the Holocaust narrative as “unforgettable and unforgivable,” we must also recognize and value “the Help Story.” Shostak says, “We must recognize altruism as well as anguish, care with cruelty and valor along with victimization. By substantially improving how we remember, use, document and teach the Holocaust, we elevate the moral capacity of our collective future.”