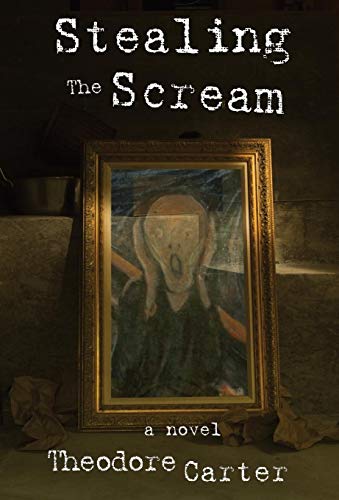 “At times Stealing the Scream is laugh-out-loud funny, but it is always filled with enough mystery to encourage the reader to keep turning the page.”

In his new novel, Stealing the Scream, Theodore Carter takes the reader on an entertaining journey of a real crime, in name only.

The crime was the theft of Edvard Munch’s “The Scream,” but that’s the only similarity to Carter’s story.

The story opens with Percival Davenport, CEO of Diacom, leaving the world of big business. Wealthy, divorced, Percival is now ready to enter into a world with which he has absolutely no familiarity—retirement.

His desire is to pursue a leisurely life of recreation, specifically as an artist. With this goal, and a modest skill as an artist, he packs up his life, leaves behind his ex-wife Laura and his daughter Katherine, and with his house manager, Lucinda and his personal chef, Will, he departs for England.

He buys a remote property, renovates it, and creates a hidden room accessible through a doorway known only to himself and Lucinda. This is his studio.

As he acclimates himself to his new life, he realizes that to achieve his goal, he must seek training and he hires Ray Whittaker, an artist and a teacher. Ray is a minor character but plays an important role in bolstering Percival’s self-confidence and developing his talent.

Enter Leonard, a guard at the National Museum in Washington, DC, and here Carter begins to lay the ground work for the story arc.

As Percival’s life continues on a steady trend, Lucinda, who takes on the responsibility of keeping him on the right track, begins to feel more of a romantic attraction to him. Her sense of protecting him begins to grow more at this point.

Although Percival is making progress with his artistic skills, he senses that his progress has stalled. He begins to follow trends in the artworld, including art thefts, and the thought occurs to him that instead of stealing art, he would like to have his work displayed in the major museums around the world. But how does he accomplish this?

Quite simple: He hires Red, a man of many dark talents, and pays Red to break into museums and hang his paintings next to world masters. Percival considers them his donations. The first museum Percival chooses is the National Gallery. Red successfully enters the museum and puts Percival’s artwork on display . . . now remember Leonard? Here Leonard reenters the picture.

The picture is not observed by any of the museum personnel except Leonard. He brings it to the attention of his boss, and the conundrum arises. Who is this painter (Percival used a pseudonym), why is his work hanging in the museum, how did it get there, and what do they do with it?

As time progresses, Percival and Red place different pictures in different museums throughout the world—each picture with a different pseudonym signature, but each painted, in reality, by Percival. He may not be getting the recognition he desires, but he is comforted to know that his work is hanging next to many of the greatest artists in world history.

But is this enough? Apparently not. If his work is good enough to hang in these museums, even surreptitiously, then he should have world famous works hanging in his museum . . . small as it is. He settles on Edvard Munch’s painting, “The Scream,” and once again he hires Red to fulfill this desire.

The theft is accomplished with a certain amount of dramatic flair, and it is settled in Percival’s studio. But the very presence of the picture begins to wear on Percival, who now spends all of his time replicating it. He paints it on paper, on cardboard boxes, on any medium available to him. His mind begins to fall into dark places as the picture(s) begin to scream at him. After all, this is “The Scream.”

But let’s not forget Leonard. He has begun putting together the pieces of the museum puzzles, and as more pictures are discovered in more museums, and more administrators panic at not knowing how they got there and how to get rid of them, Leonard saves the day. He begins collecting the pictures and at the same time begins to unravel the web of intrigue that Percival has woven.

Carter has, himself, woven an intricate web of deception throughout this story. At times it is laugh-out-loud funny, but it is always filled with enough mystery to encourage the reader to keep turning the page.

The finale is not what one would expect, but it is satisfying with all loose ends tied up neatly. One gets the impression that Carter had a lot of fun writing this story, and that is, after all, what reading is all about. This one was a scream to read.