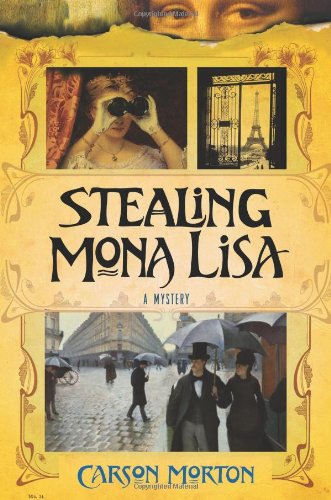 “[a] well-crafted, beautifully written, and engaging mystery. . . . Carson Morton is, quite frankly, a masterful storyteller.”

So well known to all who are interested in such things are the circumstances surrounding the 1911 theft of the “Mona Lisa” from the Louvre and its recovery some three years later, that it has tantalized writers and conspiracy theorists for a century.

The facts are so sketchy and the theft and recovery so simple and straightforward that it does give rise to some pretty intricate speculation. We cannot believe that something as monumental as the theft of Da Vinci’s greatest masterpiece could possibly be pulled off by a simple Italian Nationalist janitor. Vencenzo Perruggia stole it in the mistaken belief that it rightfully belonged to Italy, not realizing that Da Vinci had presented it as a gift to Francis I when he became the French court painter.

Perruggia had worked at the Louvre and was a familiar face there. When he walked into the Salon de Carré where the painting was displayed and found it empty, he removed the painting and took it to a staircase where he relieved it of its frame, stuck it under his smock, and walked out. He saw his opportunity and he took it, simple as that.

Three years later, hoping for a reward, Perruggia came forward and the painting was returned to the Louvre. Perruggia was given a light sentence because, although mistaken about the painting’s provenance, he was still considered something of an Italian hero.

Those are the known facts, but it is our nature as humans to equate magnitude with complexity of strategy and execution—in short, with genius.

So we speculate, we devise conspiracy theories, with some delightful results. In The Final Problem, a Sherlock Holmes short story filmed for the BBC and starring Jeremy Brett, the theft of the “Mona Lisa” by Professor Moriarty, and its recovery by Holmes convinces the villain that he detective must be eliminated. Fanciful? Of course.

A more serious alternative theory, which gained some traction at the time of the actual theft, is that it was masterminded by a gang of international art thieves and forgers led by the notorious “Marquis” Eduardo de Valfierno, an actual Argentinean conman, not a fictional master criminal. Author Carson Morton accepts this speculation in the intriguing and intricately plotted mystery novel, Stealing Mona Lisa, published on the 100th anniversary of the heist that took place on August 22.

Valfierno is a well-known dealer in fine art; that most of his merchandise is forged is less well known. Having lost his best painter/forger he lights upon a plan that will be his greatest achievement and might well justify his existence on this planet. It is the stealing of the “Mona Lisa” from its highly secured place in the Louvre, the forging of six copies and the selling of those copies to that most narcissistic subset of the upper classes, the private art collector.

Some of these men have private galleries in their mansions where they and they alone can sit and revel in the ownership of their collections of works by the greatest of the world’s painters. Ownership of them is not about art, it is about possession and ego. In fact, most of them know little or nothing about the art they possess, nor are they particularly interested in it as Art, which makes them prime targets for the art forger. It goes without saying that most of their collections are copies, sold to them by men like Valfierno, whose principal “mark” in Morton’s novel is the middle aged wealthy industrialist Joshua Hart and his much younger and more charming wife, Valfierno makes the fatal mistake of falling in love with her.

“Have you ever experienced le coup de foudre, Mr. Hargreaves? Have you ever fallen in love at first sight? . . . Did you know that a man can fall under the spell of a woman and not even realize it?”

It is Ellie who proves to be Valfierno’s undoing. This is not a spoiler. Not only do we know that the plot is foiled because, well, the “Mona Lisa” still hangs in the Louvre, but Morton tells us so in the prologue in which the aging and sick Valfierno tells his story to a young newspaper reporter.

Mr. Morton retains all the known facts and intertwines them with the shady but glamorous world of art forgery and theft, putting together a colorful band of rogues headed by Valfierno, who is as charming as he is slippery—and could only be played by a middle aged José Ferrer.

The remaining members of his gang seem to be stock characters, but Mr. Morton does manage to make them lively, colorful and fun. He also manages to make the real thief, Vencenzo Perruggia, an adjunct member of the gang.

Valfierno’s usual method of operation is to hang a fake behind the original in the frame, show the original to the prospective customer, allowing him to mark the copy in back to prove its authenticity, then later having Emile, disguised as a janitor, slip the forgery from behind the original and walk out with it. Valfierno then sells the fake to the customer, authenticated by the customer’s own marking. He tells the customer that museums have copies on hand to replace paintings that get stolen so the public is not aware of the theft until the thieves are caught and the painting recovered. Everyone is happy, and Valfierno has made a pretty good living in this way.

But with the “Mona Lisa,” the plan has to change. The theft must be widely known or the potential customers will not believe they have the real deal. At the same time, the forgeries have to be so precise that even the greatest experts would not be able to tell they were fakes. The fiery Spanish born painter who forges the copies of the “Mona Lisa” is called Señor Diego, but this nonfiction character will be known eventually by another more famous name, a name that not coincidentally, has been linked to art forgeries.

That is the set-up, and it plays out like a well-crafted mystery film. Mr. Morton is a screenwriter, and it shows, not only in the plotting and character development, but in the startlingly detailed and accurately rendered visuals of the Parisian cityscape. The visual writing is one of the novel’s greatest strengths as seen in the following paragraph that describes a marketplace in Paris.

“They were immediately immersed in a bustling hive of activity where every possible stratum of society was on display; ladies dressed in the latest style modern, laden with hatboxes, gentlemen trapped in uniform dark suite showing off their individuality with an endless variety of elaborately sculpted mustaches and beards; young women in coiffes bretonnes, their arms full of dresses, food baskets, or bouquets of flowers, hurrying off to deliver their loads to their household employers; old men sitting beneath striped awnings in front of cafes, solving the problems of the day in a haze of pipe smoke; old women in drab grey, loose fitting clothing, peeling potatoes and selling vegetables from under wide umbrellas.”

The planned theft and the selling of the forgeries to the greedy upper class marks goes off without a hitch, but of course, we know it cannot succeed. The delight one takes from the narrative is the unfolding of the plot, the richness of the mise-en-scène and the charm of the characters.

Two notable events took place at about the same time period, the stealing of the “Mona Lisa” and a major flood in Paris due to heavy rains and the River Seine overflowing its banks. Mr. Morton takes advantage of the flood to stage a tense, and immensely satisfying climax.

One might quibble about the novel’s ending being a bit contrived, a bit Hollywood, but that’s a small thing in an otherwise well-crafted, beautifully written, and engaging mystery. The pacing is superb, making us hope, in spite of all we know, that the Marquis Eduardo de Valfierno and his charming gang of art thieves actually do manage to pull it off.

Carson Morton is, quite frankly, a masterful storyteller.