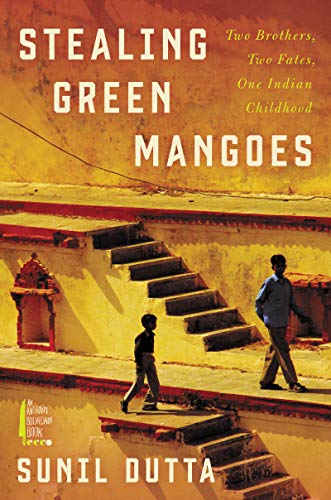 Sunil Dutta takes you on a journey from northern India, grossly partitioned after the independence from the United Kingdom, into Pakistan (primarily Muslim) and India (primarily Hindu), which is an epic story of bloodshed and war crimes. Like so many families Dutta’s affluent family lost all of their property because they were living on the wrong side of the partition and fled to safety on the Indian side. This memory alone is worthy of a Gone with the Wind epic, which one can only hope will be preserved in celluloid.

Stealing Green Mangoes is a memoir of two brothers who took very different paths, one working for the law and the other a criminal. As boys they would sneak into the yard of a private school and steal the mangoes, a luxury they could not afford. Yet somehow Dutta is able to remain positive, despite living in an extended family household with a bitter property feud. Dutta embraces the full-on nerd academic pursuit first with an agricultural degree in India and then eventually a postgraduate degree in biochemistry working as a researcher in the U.S. His improbable path took him to the U.S. thanks to his scholarship and his American sweetheart.

This book is filled with so many improbabilities that it could be several tales, not the least of which is the love affair with his Caucasian girlfriend when this was not acceptable in India; she later became his wife, Wes. Large portions of the saga are filled with his yearning for Wes, the love of his life. Note to lovers of Indian poetry this may satisfy greatly.

“Love had arrived, this world and the next one had been achieved, my body of dirt had risen to the heavens!”

“Rationality ruins the world. Love saves the world and the hereafter.” —Rumi

Stealing Green Mangoes really hits its stride when Dutta reveals his journey from research scientist to becoming a LAPD detective, and we ride along in his squad car for the thrills and chills of crime investigations in Los Angeles, a city of 10 million people. He frequently flashes back to his past as he pursues crime investigations in the city, and this technique is most successful in his personal story.

South Central LA is the center of gang territory in the sprawling metropolis and the book is infused with the frequent bursts of blood and bodies that Dutta encounters in his police work.

“The victim had feebly lifted his left hand to his head; his fingers looked like claws and he was trying to scratch the bullet wound. The movement was slow and delicate. I brought my face to his and tried to listen amid the noise and confusion.”

“As I came to know gang members, I learned that they had no knowledge or understanding of gang culture or history and absolutely no interest in improving their own lives or communities they lived in.”

Dutta’s juxtapositions of the memories of his family diaspora to the difficulty of gangland police turf makes for an invigorating read. One can’t help seeing some similarities to the harsh rules and beatings meted out in his homeland. Where the book loses its heft is when Dutta tries to rationalize his brother’s sexual exploitation by a “Rajpur clan member” and his subsequent turn to crime by contrasting it to his own more serene path.

And most astounding, Dutta is writing this book with a terminal cancer diagnosis; it is not his first book, so to anyone who thought they were an overachiever step back as Dutta is a scholar, a cop, and a survivor of atrocities.