Steal the Menu: A Memoir of Forty Years in Food 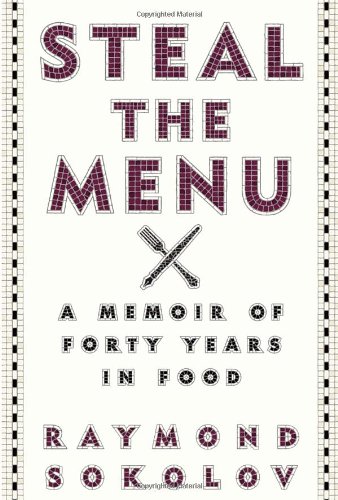 When Raymond Sokolov took on the daunting task of replacing the legendary food editor Craig Claiborne who retired from the New York Times in 1971, he was head of a four-person department that apart from himself included a test cook, a secretary, and a stenographer. Forty years later you can barely keep track of all the food journalists at the Times they are so numerous and prolific.

To be culturally literate these days includes knowing what’s happening in the food world. Food culture is an ever-changing landscape and it takes an army of food writers to keep up with our exploding demand for trending culinary news. It seems that just about anyone with a laptop or smart phone has an opinion about food. The world is now awash in food bloggers.

Yet cut through all the noise and you will find someone like Raymond Sokolov whose food writing has been a constant and original voice for over 40 years. He may not enjoy the name recognition of Craig Claiborne—Sokolov’s tenure at the Times lasted a mere two years—but he has been a keen-eyed witness to the food revolution that has taken us from tuna noodle casseroles to seared line-caught tuna with mango and avocado on the home front and from the Escoffier-based stuffy world of French restaurants like La Caravelle in New York to primitive modernist cuisine served at the highly acclaimed restaurant Noma in Copenhagen, Denmark. As he writes in his introduction, “. . . I cannot and would not want to claim to have been a primary actor in the making of these events and trends. I was there, and I ate what was put in front of me.”

Part memoir and part food history, Steal the Menu is a thoroughly satisfying book that is both fun to read and informative. If you aren’t yet familiar with Mr. Sokolov you are in for a treat and will wonder how this writer has escaped your attention all these years. And if you are familiar with him either from some of his previous books like The Saucier’s Apprentice or his restaurant reviews in the Wall Street Journal then it will be like sitting down to dinner with an old friend. Either way, prepare to be delighted.

Mr. Sokolov is an accidental food writer. A classics major at Harvard, he, “like a whole generation of future American food lovers, . . . discovered the gastronomic me on $5 a day . . . bumming around Europe after freshman year, in the summer of 1960.”

While working on his Ph.D. in classics at Harvard, he was hired by Newsweek as a correspondent in their Paris bureau. With little real work to do he busied himself entertaining potential sources at many of Paris’s best restaurants. What he got out of his experience was a perfect command of the French language and a thorough understanding of classic French haute cuisine. He concluded that “Plato and truite meunière were both classics, in basically the same sense.”

He moved to New York with Newsweek in the late ‘60s to work as a culture writer. In 1971 he became Craig Claiborne’s replacement as food editor at the New York Times—to him an implausibly lucky assignment given his lack of professional culinary training. But as A. J. Liebling (coincidentally whose biography Raymond Sokolov wrote) penned in his excellent memoir Between Meals, “The primary requisite for writing well about food is a good appetite.”

Unfortunately he was not well liked by the Times executive editor, Abe Rosenthal, and his high profile gig uncovering the next big thing in the food world abruptly ended in 1973. In the 1970s, “the basic tone of Times criticism was middlebrow and allrightnik . . . I knew perfectly well that food news at the New York Times was an inappropriate perch for an intellectual child of the sixties with a scornful view of the New York food scene and an angry reaction to its class-bound standards. “

Still, his career as a food writer was launched and he went on to write several cookbooks, a regular column on food history for Natural History, the magazine of the Museum of Natural History in New York and later became the longtime culture editor for the Wall Street Journal.

Over the years he saw a transformation unfolding in the food world. In the 1970s nouvelle cuisine—that much misunderstood and maligned French style of cooking that eschewed heavy sauces based on flour, insisted on the very best ingredients and was plated on individual large plates that dwarfed the portion size—was recognized by Mr. Sokolov at the time as being something that “had deep roots in European gastrolinguistic tradition and was the logical conclusion of centuries of change in the way food was brought to the table and served to individual diners.”

The influences of nouvelle cuisine are still being felt, informing new American cuisine as well as the modernist cooking of Ferran Adrià of El Bulli and beyond. This is the overarching theme of Steal the Menu that Raymond Sokolov approaches with unalloyed enthusiasm: Over the last forty years there have been game-changing culinary innovations that have brought us to where we are today—a place where Las Vegas has become an elite dining mecca, you can have as good a fine dining experience in Des Moines as you can in New York and where you can buy Japanese panko breadcrumbs in any major supermarket in America.

The road to contemporary culinary literacy no longer requires the obligatory gastronomic awakening in Paris.