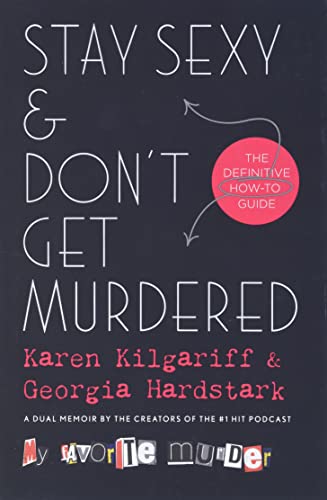 "While the podcast has a semblance of structure, the book reads more like a stream of consciousness blog, written by two obviously witty, intelligent women, seemingly baffled by their success."

True crime is not a genre usually associated with humor—except of the blackest, graveyard variety. And it is rarely cross-bred with joint memoirs and self-help advice books.

But in Stay Sexy & Don't Get Murdered: The Definitive How-To Guide, co-authors Karen Kilgariff and Georgia Hardstark, hosts of a podcast Entertainment Weekly called  “morbid [and] mirthful,” give it their sincere—and  snarky—best.

“My Favorite Murder” is a highly rated podcast that draws an estimated 19 million listeners a week. The co-hosts, dubbed by the Guardian “the killer queens of the true-crime podcast,” take turns retelling and rehashing gruesome murders, but absent any original research and reporting. It’s based mostly on previously published books and articles on the web, but with much commentary, speculation, and digressions, frequently punctuated with hysterical laughter. The book’s title is the podcast’s signoff.

The actual genesis of the podcast was a chance encounter between the co-authors at an L.A. Halloween party, when they struck up a chat about “The Staircase,” a French-made docu-series for HBO about a Durham, N.C., man convicted of killing his wife. The two women realized they were “both obsessed and thrilled” by the conversation, a typical reaction of true crime fans.

There were—and are—some problems as the podcast launched, Kilgariff writes in the book’s introduction:

“Every time we record,” the former TV comedy writer cheerfully admits, “we know there’s a trapdoor of ignorance waiting beneath our feet.” And, she adds, the early episodes “felt more like a therapy session than a podcast.”

On a more serious note, Kilgariff writes, “I think we felt the need to pull a useful lesson out of the senseless tragedy,” including warning signs to listeners to make certain it didn’t happen again.

Notwithstanding, the podcast succeeded well beyond their expectations. They have parlayed it into a small, multimedia, commercial empire: sold-out live national and international tours; a paid membership fan club (“Murderinos”); a podcast network; and a web site hawking merchandise.

So a book seemed the obvious next step to further monetize the project. Their first notion, Kilgariff, 48, writes, was something big and glossy, with lots of photos, “a sort of printed Instagram.”

But in the writing and editing it became something quite different. “This scrappy little true crime-comedy podcast that you’ve been listening to at your temp job has somehow figured out a way to transition itself into the world of . . . literature.”

Well, Kilgariff is being ironic—the italics are there for the clueless. In a similar but more candid vein, she told the Guardian, “In a lot of ways it’s as much a cry for help as a self-help book.”

Beginning with Kilgariff’s part of the serial introduction, the book is written in a familiar dialect, best described as “podcast chirpy”—conversational, self-conscious, and ultra-familiar. Perfectly pitched for millenials and older, the tone is discursive and reflexively tangential.

As with other aspects of their collaboration, they admit, the results are “sometimes insipid, sometime genius.” What they are after in both their podcast and their book is a “good hang.”

At their first live performance, Kilgariff acknowledges, “We had no idea what we were doing, and it didn’t matter!” At least for what she calls the “Murderino community.”

At a recent, live performance, one of the authors observed in passing that the older the case, the more distant it is, and thus the more abstract the victims are from the horror. Thus, the easier it is to have irreverent fun with. Yet murder as entertainment is more than a guilty pleasure.

The book’s mood begins to turn serious when Hardstark, 39, joins the conversation. In her portion of the Introduction, she writes that women should never be quiescent out of politeness, although the former cooking show host puts it more graphically. This kind of behavior, they write, can get their readers hurt, emotionally or physically, or even killed.

Later, she addresses the subject of the book more directly to their mostly female, mostly younger audience. Her advice: “So be adventurous and take risks and go into the forest (metaphorically) but please keep your eye on your surroundings. ’Cause you never know when there will be a hitchhiking rapist . . . or a hiking trail that leads to death.”

While the podcast has a semblance of structure, the book reads more like a stream of consciousness blog, written by two obviously witty, intelligent women, seemingly baffled by their success. There is discussion of their childhood traumas, family disfunctions, and much talk of the value of therapy—all pretty standard, uplifting, self-help fare. Nothing you couldn’t figure out yourself.

“We’re only experts in our own experiences,” as Kilgariff says.

Fortunately, they do take breaks from this obsessive introspection to return to their addiction to murder—after all, the reason for the book—and where it all began.

For Hardstark, it was childhood discovery of the late Ann Rule’s true crime classic about serial killer Ted Bundy, The Stranger Beside Me. At the time, young Hardstark was fascinated by television shows like America’s Most Wanted and the haunting photos of missing children on milk cartons.

“Thinking back,” she writes, “I don’t know how anyone else who grew up when I did didn’t become obsessed with true crime . . . But while everyone else in my generation grew out of their fascination with true crime, I fell more deeply in love.”

Hardstark also includes a close brush with becoming a victim herself when she was a vulnerable young teen, getting into the car of a creepy stranger whom she met as a waitress. There was also the time her brother got lost in the woods during a family camping trip, and she thought something dire had happened to him.

For her, and no doubt many of the fans of the genre, as well as of her podcast, “These stories help me process my own fears and anxieties around death.” At the same time, she acknowledges, “I have an obligation as an avid participant in true crime to remember that many people have to live these stories, and it’s more than just a cautionary tale or a late-night thrill. The people who care about you won’t be the same without you.”

Then, it’s back to the banter, still the book’s and the podcast’s default, and what makes listeners still come back for more. All good, for what they both are, and what has put “My Favorite Murder” atop the iTunes comedy chart.