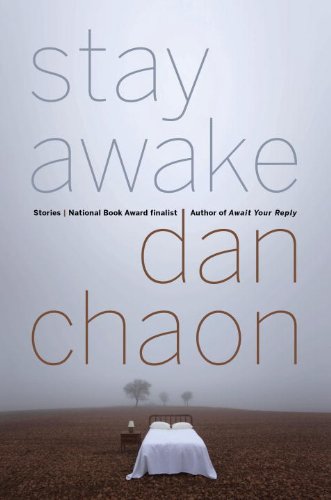 “. . . yet these rustbelt characters aren’t just anyone; many of them lack the intellectual skills to thrive in our post-industrial/information age/digital economy, a handicap that increases the likelihood that they will find themselves in the path of life’s calamities and renders them less resilient and resourceful when disaster strikes. . . . Readers who enjoyed Mr. Chaon’s previous collections of short fiction, brace yourselves for this new volume’s darker tone, but the quality of its writing will keep you glued to the pages. Stay Awake is recommended to all readers who enjoy short form psychologically perturbing fiction.”

Recollections of spousal abuse, a double suicide, traffic accidents, traumatic brain injury, an infant born with a parasitic twin conjoined at the head, a kidnapping, and a few murders are but some of the traumas in whose wake Dan Chaon’s—mostly male, middle and lower-middle class, Midwestern, young adult to early middle-aged—characters struggle to regain emotional stability in Stay Awake’s dozen grimly realistic stories.

in “The Bees” a son’s nightmares cause his father to recall abusing his first wife and abandoning his older son, details of his first marriage he cannot bring himself to share with his current wife who never asked but now senses he is less than honest with her;

in “Patrick Lane, Flabbergasted” a young college drop-out cannot bring himself to return to school, attend friends’ funerals, or keep up basic house maintenance and repairs in the years following his parents’ joint suicide;

in the title story a father, after spending long hours in the hospital with his infant daughter who was born with the head of an underdeveloped parasitic twin conjoined upside down at the cranium, falls asleep at the wheel on his way home, and readers infer from his wife’s remarks while visiting him in the same hospital that she and the daughter will survive, but he won’t;

in “Long Delayed, Always Expected” a divorced woman begins seeing her ex-husband who since their divorce has suffered a traumatic brain injury and discovers that she prefers his new brain-impaired personality to his old healthy one;

in “I Wake Up,” two decades after a woman drowns the younger two of her eight children (all from different fathers) after which the six surviving children were separated by the foster care system, child number six, a slow witted young adult still living with his adoptive parents, begins receiving phone calls from a woman who identifies herself as his oldest sister but whom readers will infer is actually his imprisoned mother;

in “To Psychic Underworld” a newly bereaved widower starts finding little notes everywhere and feels he is losing his mind;

in “St. Ditmas” a young man kidnaps his negligent methamphetamine addict girlfriend’s son in Michigan, makes him his accomplice on a multistate burglary spree, only to abandon the boy in the kidnapper’s hometown St. Ditmas, Nebraska;

in “Thinking of You in Your Time of Sorrow” a couple of recent high school graduates is spared the fate of marrying early and curtailing their educations when their infant child dies but wonder if they will each have to carry the memory of the lost baby forever;

in “Slowly We Open Our Eyes” an unemployed college graduate in Chicago uses the occasion of his grandmother’s funeral to move back west with his family of high-school dropouts courtesy of a ride with his truck driver brother, and en route they hit a deer;

in “Shepherdess” on what she intended to be their last date a woman chases her cat up a tree, falls, and instead of announcing the breakup asks her clueless date to call EMS—at the hospital the next day she tells him things weren’t working out between them, that she’s married, and her husband is returning from work overseas to care for her during her recovery (all of which is told from the date’s point of view);

in “Take This, Brother, May it Serve You Well” an obese widower, former smoker, and recovering alcoholic who suffered his first heart attack at age forty falls off the wagon during a business trip in Portland, Oregon, a city whose free spirited residents he views with disdain;

and in “The Farm, The Gold, The Lily-White Hands” three adult sisters, who are haunted by their girlhood memory of the night their estranged father came to the house intending to kill them but murdered their mother instead, try to come to terms with their loss. This last story has a beautiful lyrical tone; with its occasional sentences that end with a space instead of a punctuation mark and paragraphs that begin with a lower case letter it is the most formally experimental story in the collection, and its Thomas Carlyle quotation and the extended metaphor derived from that quotation make it the most literary.

Although the catastrophes differ, the characters’ thought processes and responses to the disasters are similar, as is the tone and tenor of the prose throughout the collection with the already noted exception of the final story.

While some stories are told in the third person while others are in the first, and most reflect the male point of view though a few are from the female, Mr. Chaon’s voice comes through them all. The author seems to be working out personal issues through his characters, some of whom question their own reliability and grip on reality.

Like some of his characters, Mr. Chaon grew up adopted and is a widower. His readers can only guess the adversities he has endured and, should he ever write a memoir, whether it would be as compelling as his fiction.

Highly educated solidly upper-middle class readers who have lived relatively charmed and fulfilling lives will probably find the violence in these stories shocking and disturbing. Compared to themselves and their bicoastal peers such readers may find these characters from the flyover states lack judgment, keenly focused intelligence, and have difficulty understanding cause and effect or anticipating the consequences of their actions, much less thinking two or three moves ahead on the chessboard of life.

But unless they have lived through traumas similar to those described in Stay Awake such readers would be wise to reserve judgment. The stories remind us that tragedy can strike anyone at anytime, and those struggling in its wake sometimes don’t exercise good judgment.

And yet these rustbelt characters aren’t just anyone; many of them lack the intellectual skills to thrive in our post-industrial/information age/digital economy, a handicap that increases the likelihood that they will find themselves in the path of life’s calamities and renders them less resilient and resourceful when disaster strikes.

Interesting note: In a book about traumatized characters struggling to emotionally recover there is not even one psychotherapy scene.

Readers who enjoyed Mr. Chaon’s previous collections of short fiction, brace yourselves for this new volume’s darker tone, but the quality of its writing will keep you glued to the pages. Stay Awake is recommended to all readers who enjoy short form psychologically perturbing fiction.