State of Wonder: A Novel 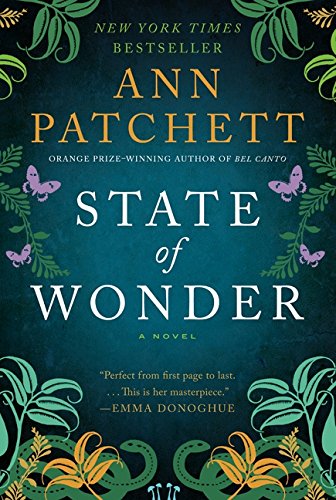 Ann Patchett’s newest novel, State of Wonder, begins when a Minnesota pharmaceutical company receives word that one of its researchers has perished “from fever” deep in the Amazon jungle, the stage.

Vogel drug company had sent one of its scientists, Anders Eckman, down to Brazil to follow up on a 13-year research project that seemed to have stalled. Startled by the news of his death, his lab partner, Marina, and the company’s director, Mr. Fox, decide that Marina must go down to South America herself to try to find answers for Eckman’s death, if only to provide closure for his wife and three young sons.

Marina’s journey deep into the heart of Brazil takes her first to Manaus, an old, cultured city that teems with contradictions. There she picks up leads on locating the Vogel Project director, Annick Swenson, herself an elusive, yet powerful figure. Marina tenacity convinces Annick to take her back into the jungle to the project site, and there Marina slowly learns, through her interactions with the natives, more about the mysterious lives of the scientists and their experiments, as well as the circumstances surrounding Eckman’s disappearance.

Aside from her primary concern of finding Eckman’s remains, Marina also discovers what is at the heart of the ongoing project. The females of the indigenous tribe at the project site exhibit fertility far into their lives, and Marina witnesses women in their seventies bearing children!

When she discovers what causes this hyperfertility, she finally gets Dr. Swenson to reveal the crux of the research—a fertility drug that would have far-reaching effects if it became part of Vogel’s program. But, there’s another side effect to the drug that is much more important to humanity, and therein lies a conundrum that Marina tries to resolve within herself and for her the company.

Ms. Patchett’s narrative in this novel is compelling and deeply moving. She writes with a knowledge and passion about a world that most readers know very little about. Her characters are all engaging, and readers will discover with delight how the story unfolds as layers of the characters and events are peeled away to reveal subtle themes in this ultimately complex novel.

Each character is exquisitely molded with an individual personality that contributes to the mechanics of the story. Even the most minor of characters has a role that fills a niche in this novel. In other words, none of the characters are superfluous, as in many novels where an author attempts to weave an intricate plot.

One can appreciate Ms. Patchett’s descriptions of native life, as in, for instance, the gripping scene featuring an anaconda that is both appalling and repulsive in the telling. She likewise describes the scene of the jungle in such a way that it isn’t difficult to imagine, and provides a background for native life that makes the reader wonder if the author had spent time in the jungle herself.

The writing throughout never waivers from the rich prose readers have come to expect from this talented writer. This is a book that will be savored while reading and appreciated long after the last page is turned—a fitting addition to Ms. Patchett’s already impressive oeuvre.