A State of Freedom: A Novel 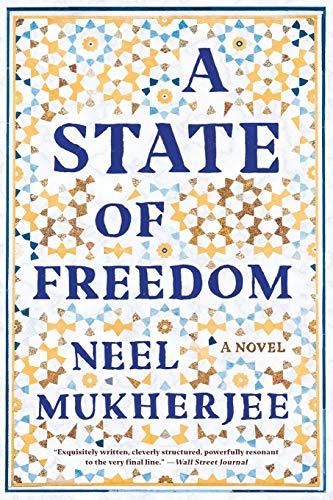 Calcutta-born Neel Mukherjee, whose prior work has been both shortlisted for the Man Booker Prize and cited as a New York Times 2018 Notable Book listing, is often compared to V. S. Naipaul, one of India’s most idolized writers. It’s a comparison he acknowledges with pleasure, telling one interviewer, “Naipaul’s work is never far from my thoughts.”

Mukherjee has described his novel as having a conversation with Naipaul’s 1971 masterpiece, In A State of Freedom. He employs an experimental form much like that employed by Naipaul in having that conversation. It’s a form that eliminates emphasis on the usual elements of novels, instead substituting a narrative that relies on philosophy and metaphor in place of plot and character to illuminate meaning.

Mukherjee writes with the exquisite literary power of Naipaul. His descriptions of people and place are extraordinary in their verisimilitude. Here, for example, is an Indian man gazing out from his parents’ Bombay apartment near the sea on an annual visit. “It was low tide and the expanse of madly serrated and pitted black rock that was the beach had emerged, glistening . . . The outcrop was dotted with men going about their morning ablutions: . . . bathing in the rock pools; . . . washing their clothes, stretching their sheets and towels and vests on the rocky surface and running a bar of soap along them vigorously, as if grating a carrot, then threshing the soaped clothes on the rough rocks to get out the dirt, finally rinsing them . . . creamy rings of suds formed around some of the men. . . . There were three or four men . . . pissing into the sea. Two boys appeared . . . their arms hugging plastic bags full of flowers . . .”

He is equally skillful in describing human emotion, such as anxiety. “The train started to move with a giant judder and a high-pitched creak; an enormous sleeping beast waking up. . . . Was [her brother] going to collide with someone and fall as he ran with dozens, scores of others? She was seized with such a desire to run out and throw herself on the platform [that] she put her hand to her mouth and bit the fleshy bit at the base on the inside as hard as she could bear and then a little more.” Or this: “She felt she was drowning; the whole world was empty and it was just herself on an endless stretch of water and she knew that it was going to swallow her up.”

The novel Mukherjee has written finds its structure in five parts of varying length, with characters and events cleverly inhabiting or connecting them. The connections are so subtle that it requires revisiting all five sections after reading the entire book in order to fully explore the fugue-like way in which he has told their stories. What can a boy and his father possibly have to do with a vagrant’s dancing bear or a construction worker who falls to his death? How, and more importantly why, does a housemaid become the most prominent character in nearly all the tales, especially the one in which she escapes bondage?

Life in India—for the rich and the poor—is brilliantly brought to life in this tale of inequity, cruelty and class, generational divides, violence, politics, the struggle for survival, and the quest for freedom that encompasses the teeming reality that is India.

But there is more to the connected stories that describe despair and inspire hope. Mukherjee is grappling with some of the largest issues of our time, from migration and displacement to questions of personal and national identity, even one’s own legitimacy in terms of basic human rights. Indeed, humanity itself comes into question by way of the multiple narratives woven together in this story of unequal societies and personal angst.

Essentially, Mukherjee seems to be asking a fundamental question. Can we transcend the facts of our natality, and if the answer is yes, how do we do that in a hostile world? What are the possibilities and pitfalls of seeking a better life?

In the words of one critic, this is “a study of the brutality of social divisions, written with tremendous tenderness; [it] insists on the dignity of figures obliged to lead undignified lives.”

In Neel Mukherjee’s words, “Fiction must be a quarrel with the times; otherwise, why write