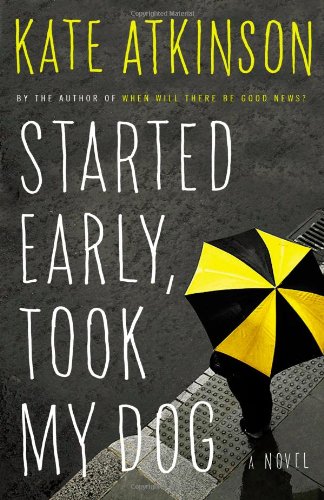 Is Scottish writer Kate Atkinson brilliant or quirky or both?

Most critics say both. Her crime novels are as captivating as the most popular thrillers, but they read like literary fiction. Ms. Atkinson simply calls her novels “fiction.” Readers who like to solve thorny puzzles love Ms. Atkinson’s work, especially the Jackson Brodie novels. The latest Brodie novel, Started Early, Took My Dog, sheds new light on good guy Jackson Brodie, a semi-retired private detective.

However, readers must be patient. Ms. Atkinson frequently takes readers deep into long streams of consciousness, exposing her characters’ manias and phobias, syndromes and neuroses. She seems to lose the plot’s urgency in such passages. Yet, they are well written—sometimes reminiscent of early Joyce. Other passages, usually descriptions of country or weather, remind one of gloom, doom, and certain fate. This heaviness is akin to Victorian novels, especially those of Thomas Hardy.

At times, understanding the characters’ connections with other characters is a struggle for readers since Ms. Atkinson creates faint clues rather than Aha! moments. Her purposes as a writer are sometimes unclear, insofar as she toys with readers, perhaps making them feel that she is all-knowing and condescending.

One must be alert to find all the pieces of the Started Early, Took My Dog puzzle, and then put them in place. At times, Ms. Atkinson tricks readers with quirky devices such as asking them to keep up with changes in time and place, even in points of view. One episode starts with “Six Months Ago.” One is titled only with a day’s name, e.g. “Wednesday;” and another, “1974: New Year’s Eve.” Let the reader figure it out.

Ms. Atkinson’s use of name games seems sophomoric among her complex passages. For instance, two major characters, both struggling aging women, are Tracy and Tilly. Characters Barry and Harry and also Ray and Rex add confusion. Even the name, Jackson, is puzzling: Jackson Brodie, the sympathetic, but not particularly heroic, hero is easily confused with Brian Jackson, another man searching for answers. While this might foreshadow a connection that will come later, the similarity of names remains awkward to readers.

Ms. Atkinson writes for stage and screen, too, and her command of drama enhances the some of the more theatrical characters and gripping action in Started Early, Took My Dog. Some characters are television actors, and they function as a play within a story, another device.

A single incident in the book grows into a convoluted plot. Tracy, a retired policewoman; Tilly, a frail aging actress; and Jackson Brodie are all fated to have their lives interwoven by lost, stolen, purchased, or kidnapped children—along with deceit, tragedy and murder. With Tracy and Tilly, two confused and sad, if not sordid, main characters, Started Early, Took My Dog is a nearly cheerless book, only partially redeemed by Jackson Brodie, a few minor characters, and his adopted dog.

The dog in the title is a happy young dog, and a hero and foil to his master, Brodie Jackson. His presence in the title and in the story adds redemptive elements to the novel, along with being an obvious symbol of the lost-and-found theme of the book. But these are not enough to hide the tragedy of the plot and its characters’ moral failures.

Ms. Atkinson’s literary education is evident in her work. She studied English literature at Dundee University and later taught there. Allusions to Shakespeare and other British writers abound. Ms. Atkinson’s graduate work focused on American literature. And significantly, it is the well-chosen verse of Emily Dickinson that runs through Brodie Jackson’s mind. Adding poetry to Brodie Jackson’s interests in this book softens him and also enriches the book. The selected poem serves as a bit of explication of the current situation. Perhaps a slight comfort or an afterword to the tragic events in the plot, the last words of Started Early, Took My Dog are from Dickinson’s, “Hope is the thing with feathers . . .”

Questions will linger after readers finish Started Early, Took My Dog. It’s a book to read and then re-read, even one worth notes in the margins—to help the reader keep up or to highlight particularly gorgeous passages. The book, though intricate and multifaceted, is a terrific read.