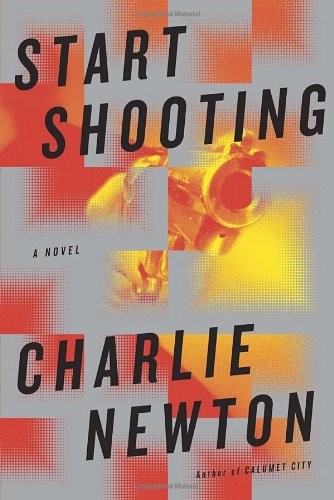 “Charlie Newton’s second thriller is as brilliant as his much awarded Calumet City. He does a bang up job of keeping us turning the pages like the megabestselling authors of the latest thrillers, but his style is fresher, lighter, and courageous.”

Charlie Newton has proven that he belongs among the best of the international thriller authors of recent years. Start Shooting is up there with the elegant, international thrillers that capture the essence of a place and then use that environment as a major player in the storyline. But Mr. Newton’s work does much more than bring a city alive.

Mr. Newton’s talent is massive, and he wields it with a hand as sure as that of other bestselling thriller writers; however, there are subtle differences between Start Shooting and other popular noirish thrillers currently on the market.

The noir thriller, a popular genre at the moment, may seem darker in certain Scandinavian-based novels that have been made into movies. In these books, noir manifests itself in dark characters and darker activities.

Start Shooting embodies noir in a more brooding, evocative manner, much like the pulp novels of the 1930s and 40s. Imbuing a novel with such depth and richness of context takes time. Yet somehow, even while developing the place like a main character, Start Shooting starts out with a bang (a drug raid gone bad) and moves at breathtaking speed till the last page.

Start Shooting has complex characters and layers of intricate plot turns. And Mr. Newton uses several literary devices to keep the book readable. The frantic action takes place in arcs, in chapters that are clearly labeled by narrator (there are two primary ones) plus date and time of day. For example, “Bobby Vargas, Friday, 10:00 A.M.” Knowing the time during which the action takes place is critical to the reader’s understanding of the book since the frantic action occurs in spurts. They are like crescendos that break without decrescendos.

Mr. Newton’s prose, at least in Start Shooting and in his first thriller, Calumet City, shows mastery of most every possible device in the writer’s toolbox. He throws verbs of violence around like a hard, driving rain. His adjectives, used sparingly, are sharp, apt, and specific. Writing in the first- person point of view in the present tense is difficult; and while effective, authors doing so take a great risk.

For Mr. Newton, the risk pays off handsomely. Two main characters, Bobby, a cop, and Arlene, a childhood friend, now an actress/waitress, narrate alternate chapters. They move the plot along and also facilitate changing chapter modes, dialogue, and physical mayhem. Remarkable writing captures internal panic that is akin to madness as a character must make a move, yet is paralyzed by indecision. The resulting prose demands immediate attention, and it is as in-your-face as the novel’s action.

“Nine minutes since the shooting stopped; the air’s still adrenaline and death.

“Mouth dry; pulse at one-twenty and coming down.”

Author Newton is very comfortable in his style, one that might be called American Modern. Evidence of this is his handling of setting. The appearance of the failed neighborhood of Four Corners on the South Side of Chicago is brutally ripped open, not only by exacting word choice, but also through the use of incisive, realistic dialogue and constant motion.

Mr. Newton captures a fragile bit of life force is his characters, although these instances are so faint that the reader must be sensitive enough to parse it in the trashy openness about places like Four Corners. This brash exposure of a character’s inner core is characteristic of American literature and far different from the in-your-face violence and amorality of the characters in those Scandinavian thrillers earlier mentioned.

Start Shooting is about two brothers, both cops, who are accused of a gruesome murder that happened way back when. Local politics, promises made, and promises broken, result in the fear that dominates Start Shooting. The reader must pay attention to keep up with the details, never just told in passing, that speed through the book.

Perhaps speed and rush to judgment are other traits in much of American fiction. Foreign authors create evocative chase scenes, hide and seek games, torture and murders, too, but their work usually takes time, time wrestling with decisions and results in pages of self-doubt.

Like the stereotype of the ugly American, the plot line and characterizations in Mr. Newton’s work flash by so quickly that there is little time for contemplation or rumination about the issues that lurk in the subtext—issues revolving around morality, value systems, honesty—and a city whose mood is pervasive and dark and scary, coloring everything.

Decisions in Start Shooting need the logic of Occam’s razor: There is no time for complex thinking, so you do the simplest thing: start shooting and ask questions later.

Charlie Newton’s second thriller is as brilliant as his much awarded Calumet City. He does a bang up job of keeping us turning the pages like the megabestselling authors of the latest thrillers, but his style is fresher, lighter, and courageous.