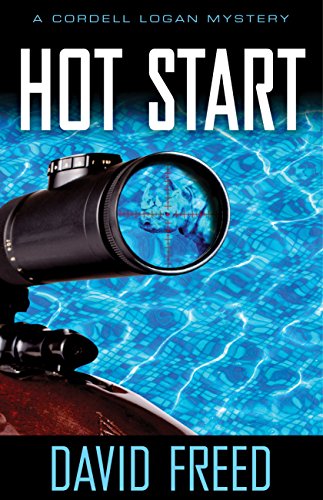 Logan is a pilot. A former assassin. A wannabe Buddhist. And a guy with a lightning-fast quip for any moment. With his gun pressed into the back of a “goon,” he’s not opposed to ask about the “fabulous fragrance” in the guy’s hair. Meeting a U.S. Congressman for the first time, Logan is underwhelmed. Asked the proverbial “hot enough for you” question, Logan replies: “I just saw two trees fighting over a dog.”

The sharpest zingers are saved for Logan’s reflections on his life and world. The county detention center in fictional Rancho Bonita reminds him of Abu Ghraib “without the charm” and the seafood casserole being served in the hospital cafeteria looks “like something the ocean might’ve spit back.”

But Logan has seen enough of the world to know that “evil people get away with evil things.” In the end, he notes, “crime and punishment share about as much in common as car seats and cattle.”

In Hot Start, Logan is given the chance to help his former father-in-law, Gil Carlisle. Logan owes him—big time. Carlisle’s daughter was killed because Logan let himself get sucked into an investigation he should have avoided. “The scars were still fresh,” Logan thinks. “If there was a hole deep enough to bury that kind of pain, I had yet to find it.”

Carlisle’s nephew Dino Birch, a strident animal rights activist, has been picked up for the murder of an international big game hunter and his wife. Carlisle knows that Logan is “just a flight instructor” and “not some kind of investigator” (guess Carlisle needs to read the rest of the series), and he wants Logan to help determine if he should sink money into his nephew’s legal team—or not.

Hot Start moves quickly. Freed writes with a brisk, light style. And while Logan would prefer some hammock time, Freed keeps him busy. Logan tends to his ill octogenarian landlady, Mrs. Schmulowitz. He talks to his intensely indifferent cat, Kiddiot. He holds an ongoing series of snarky chats with a potential girlfriend and feuds with a television reporter whose ethics are shaky. He also gives flight lessons to students in the shimmering heat, which isn’t the friendliest environment when it comes to manmade flight.

And he keeps the main investigation charging along, helped in part by his manifold connections, including one channel that knows what the White House is thinking.

Hot Start jets off to Prague, affording us glimpses of Logan’s previous ways as throat-slitting assassin, and swoops back to California in this breezy plot. Logan comes across compromising photographs of the aforementioned congressman and then his sharp eyes and understanding of sniper lairs leads him to a clue that seems to reinforce the theory (a nice twist here) that Dino Birch’s hot water bath is justified.

Speaking of hot water, Logan isn’t afraid to tell us he likes a squirt of Mr. Bubble in his bath. Yes, for the aroma. He’s that kind of good guy—throwing knuckle sandwiches one minute and delivering a corned-beef on rye to his sick landlady the next.

Along the way, Logan attempts to develop his pacifist side. It doesn’t always work. “The Buddha doesn’t condone violence. I respectfully disagree. Sometimes the only thing evil understands is violence.”