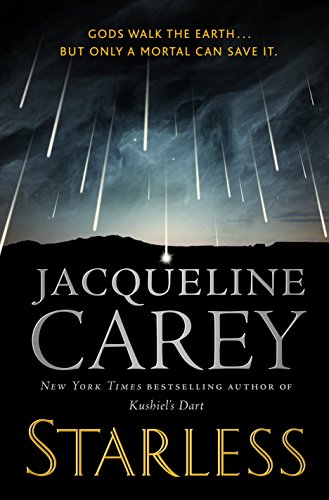 “In Starless, Jacqueline Carey has achieved what many have floundered: a story in which gender is complex and integral to the plot, but is not the plot within itself.”

Long ago, the gods fell to the earth, including one who did not deserve its fate. A princess and her sworn protector join a motley crew of mortals tasked with saving their world from the destruction of a vengeful god in this delightful high fantasy adventure with a nonbinary protagonist.

Khai, born to a fishing family, is chosen by the gods to be the “shadow” of Princess Zariya, to be trained in all manner of weaponry, poisons, and hand combat and eventually, to protect the princess in whatever endeavors she should choose. In the history of shadows there has never once been a girl-child chosen and so Khai is raised bhazim, an “honorary boy.”

Raised in a remote desert monastery under strict privacy, Khai never sees a naked man and therefore never realizes that he is physically different from those around him. Eventually he is told and, having never experienced any dysphoria with his assigned gender, begins a journey that spans the entire book to determine who he is and how to reconcile the lie he has been brought up with.

While there are plenty of other elements in the book to discuss, such as the fallen gods and their Greek-like human elements (some gamble, some rape, some care about mortals), the exceptionally well-rounded secondary and tertiary characters, and the multitude of species, thematically Starless revolves around gender: our expectations, our assumptions, our mores, and our sense of self.

Khai is born into a highly gendered society, where women are veiled and high-bred women are kept from the general population. Although the practice of bhazim is well known and regularly practiced, Khai’s mentors take it to a different level in raising Khai with no idea of his status.

This complicates Khai’s reaction to being told he (Khai consistently prefers male pronouns throughout the book) is bhazim. Being raised in a complete absence of women, the reader is unsure if Khai’s immediate rejection of the female gender is due to his gender identity always having matched the gender he was raised in (male) and so therefore never experiences the dysphoria that a girl would have felt being raised a boy, or if he simply saw no difference between the genders (having never met a woman or girl until 11) and therefore had no intrinsic sense that he could be something other.

So as Khai is pushed into a society that sees only male and female, the reader is walked through Khai’s mental metamorphosis. He has been raised to think of women as lesser, and so his initial gender identity tilts heavily towards not a man, but definitely not a woman:

“‘How do you think of yourself now?’ she asked curiously. ‘As a boy or as a girl?’

And yet, it is made clear later that the issue is not wholly cultural, as Khai faces numerous episodes of profound gender dysphoria in the women’s bath at the palace. There is some dialogue revolving around the flavor of Khai’s nonbinary gender—agender, gender fluid, third gender—all primary pivot points of the spectrum are discussed. Khai’s evolution is at it’s most heart wrenching in scenes also involving Princess Zariya, who fully supports Khai and offers information on other cultures that provide language for genders outside the binary.

It is in these palace scenes, as Khai and Princess Zariya come to know each other and the greater plot begins to unfold (a god that was unfairly cast down from the heavens seeks to destroy all of humanity as vengeance, and Khai and Princess Zariya are both god-blessed and may be able to defeat the oncoming darkness) that Khai’s gender exploration becomes slightly muddled. Khai’s birth parents come to visit and to please his mother, Khai dons traditional women’s dress and is happy that his mother is so pleased, but is left conflicted overall.

The narrative here is likely trying to convey Khai’s dual nature, that he is both man and woman, but the experience rang contradictory. Not enough time was spent building up a culture of familial obligations that would have enough impact to potentially override dysphoria, which Khai explicitly experiences multiple times just before the mother-dress scene. This scene is also the one referred back to throughout the rest of the book every time Khai debates male or female, and as a gender touchstone, is somewhat lacking.

It is important to note, however, that generally Khai’s nonbinary evolution is very well done, with so little negative reaction from others as to be almost seamless. He does come to a conclusion by the end of the book, and it is both satisfying and relatable. Khai’s more emotional scenes are done with enough overtness to answer the questions of standard readers, but still contain enough understanding of the issues at bay to strike a chord with nonbinary readers.

Interwoven with the greater plot, Khai is the nonbinary hero the fantasy genre, especially epic (high) fantasy has long deserved. His world is nuanced and deep, his culture relatable and hopeful, his journey compelling, and his romance an utter delight. In Starless, Jacqueline Carey has achieved what many have floundered: a story in which gender is complex and integral to the plot, but is not the plot within itself.

For that alone, Starless would be a delight. Yet the reader is also treated to cursing, sarcastic thieves, saucy princesses, pirates, dragons, fairies, elemental magic, and gods that will bless you by stinging you with scorpions and then leaving you in the desert to live or die. The world needs more books like this, and it needs them immediately.