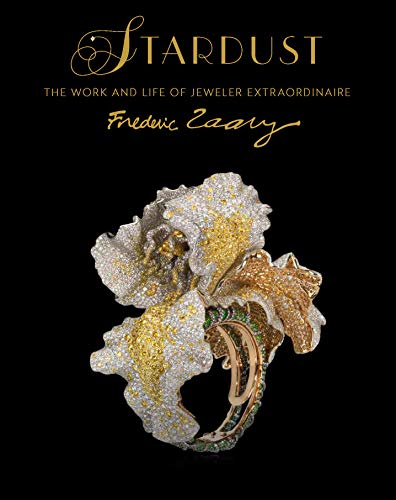 It would be a safe assumption that the name Frédéric Zaavy is known only to a select few who have dedicated and immersed themselves into the art and craft of haute joallerie and gemology. This monograph, paean, biography, chronicle, and catalog quite literally reincarnates a man who you can sense was so magnetic that it is seemingly impossible that his name it not among those positioned in the pantheon of world-renowned jewelry designers, gemologists, and craftsmen; think JAR, Suzanne Belperron, Schlumberger, and all the other designers of that caliber.

Gilles Hertzog, the author of the text wrote “He wanted the best, demanded the impossible of everyone and gave us no choice but to outdo ourselves.”

The reading of this intimate and engaging book is something that one should accept as a gift in terms of “meeting” this charismatic man who was truly a genius on so many levels, the least of which was his talent. Not knowing who he is, allows the reader the open mindedness to learn and “befriend” someone you probably wish you had the good fortune to have known, listened to, and learned from. But alas his is a short story given that he passed at age 46, well before he made a name for himself on the international stage.

This book was sanctioned and propelled by Zaavy himself; he selected the photographers, author, and anyone related to this oeuvre, and gave them free rein to create what amounts to be a sort of last will and testament of a future unfulfilled before it had the opportunity to truly be unleased to the world. The execution and content of the book is superb and . . . well . . . the jewelry may leave you speechless.

If there is one negative to be said, it is again that pesky thing called context as one would wish to have seen some of it on a finger, a wrist, or a neck but the photography is so lush that in this particular instance, context might be overlooked. The parting thought is that rarely, if ever, does a book of this genre evoke an emotional response other than for beauty and admiration of skill, but Stardust leaves you feeling actual humanity and sympathy for the abbreviated life of this visionary who was on the precipice of greatness and fame.