Star Wars: Heir to the Jedi 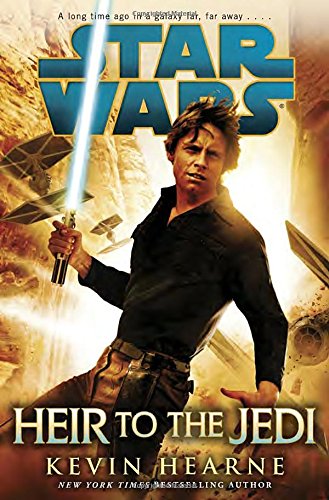 “an entertaining appetizer as fans await J. J. Abrams’ commandeering of the series with Episode VII: The Force Awakens . . .”

A central theme of the first Star Wars trilogy was the coming of age of Luke Skywalker, from simple farmer on a desert world to daring savior of the galaxy and master of the Force. The latest in over 100 Star Wars books, Heir to the Jedi fills in some of the gaps of our young hero’s rapid maturation.

The story is set between Episode IV: A New Hope, when Skywalker destroyed the Death Star, and Episode V: The Empire Strikes Back, which begins with him on the ice planet Hoth. In between he somehow learned to move small objects, such as his light saber, using the force.

Just how Skywalker grasped that skill is explained by Kevin Hearne, author of The Iron Druid Chronicles, in his first Star Wars book. He also reveals that Skywalker had a crush on a dynamic female space warrior that didn’t just so happen to be his sister. Nakari Kelen is the adventurous daughter of a wealthy biotech entrepreneur and she prefers an old fashioned “slug” rifle to a blaster. She’s joined the rebellion and lent Skywalker her sleek spaceship for an important mission. He certainly would welcome the tall beauty tagging along.

“At some point about halfway through the meal she laughed about something and her smile was so charming that I forgot not to stare and she caught me again—she literally had to snap me out of it.”

“If you’re looking for your food, Luke, it’s down there in front of you,” she said, pointing with her fork.”

“Sorry,” I said, dropping my head and feeling the heat rush into my face, trying to think of a time when I’d felt more embarrassed and coming up with nothing.”

Hearne commands Skywalker’s point of view well as he yearns for knowledge of the Force while frustrated that he doesn’t have a Jedi to train him. His affection for Nakari inspires his progress in the mysterious art, but both of their lives are thrust into danger by their mission.

Since this story takes place between the epic conflicts of episodes IV and V, this novel lacks a momentous battle with Darth Vader or a tide-turning achievement in the war with the Empire. It’s a series of action-packed missions where Skywalker, Nakari, and droid R2D2 must shoot their way through alien worlds and survive space dogfights where they’re outnumbered. Any Star Wars fan knows that Skywalker will come out of this in one piece, but Hearne still makes it suspenseful and brings the alien settings to life.

Skywalker’s main assignment is to rescue alien Drusil Bephorin from the Empire’s goons detaining her on a crowded planet. She’s a math genius who can calculate the coordinates for a hyperspace jump in her head and exchanges pleasantries with complicated equations. More importantly for the Rebels, Drusil can accurately predict the Empire’s every move and she’s a master hacker and decoder. Those skills will come in handy because every Imperial agent and bounty hunter in the galaxy pursue Skywalker and friends as they try to deliver Drusil to a safe world.

Heir to the Jedi may not an essential part of the Star Wars saga, but it’s an entertaining appetizer as fans await J. J. Abrams’ commandeering of the series with Episode VII: The Force Awakens this December. Maybe Skywalker can finally stare lovingly into his girlfriend’s eyes on the big screen.