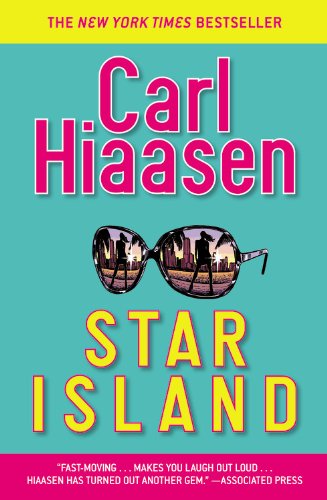 In the celebrity crazed culture we currently live in, Carl Hiaasen’s newest novel, Star Island, fits right in. This is a world where a picture of a dead celebrity can bring millions and a photographer will do anything to get that “money shot.”

Enter Cherry Pye, once Cheryl Gail Bunterman, a child star turned pop sensation hoping for a comeback despite the fact that she can’t sing a whip. However, due to the availability of real singers to cover for her and the art of lip syncing, this is not a problem for Cherry—as long as she is conscious, which, often unfortunately is a problem since Cherry’s also desperately addicted to sex, booze, and almost any drug she can get her hands on. Since Cherry can be counted on to occasionally overdose and be out of commission, enter Ann Delusia.

Ann is a wanna-be actress who stands in for Cherry whenever Cherry’s “gastritis” acts up. Star parties, movie premieres, and A-list events all sound exciting, but Ann is usually relegated to a back room for an hour or so then rushed out just so an “appearance” is made and the paparazzi get their shot. Or at least they think they get their shot—and that’s what’s important to Cherry’s mom, her management team, and her entourage of attendants.

Speaking of paparazzi, the novel would not be complete without Cherry’s most devoted follower, Bang Abbott, a dubious photographer who follows the star 24/7, simply waiting for her eventual final OD and the ensuing pictures that could make him rich—that is until a surprise plane ride with sweet Cherry turns him into much more than your standard dirt bag pap. After that encounter, he’s out for revenge.

Hiaasen’s wild ride also includes a former Florida governor nicknamed “Skink” whom Hiaasen readers might remember from a previous book. Now he is turned rogue environmental conservationist who isn’t above kidnapping or assault with a sea urchin to protect the wetlands. Add in a creepy bodyguard with a unique arm appendage, and some other slightly fantastical plot twists, and you’ve got Star Island.

Basically, the novel’s central question is whether Cherry can keep up her career and lip sync her way back to stardom when she can barely stay upright or will Ann be outed as the fake “Cherry” after all those photo ops?

It’s a rollercoaster ride, loaded with Hiaasen’s signature twists and turns. In the end, although the brown-eyed Cherry lookalike Ann is the only character worth caring for, the rest provide sweet comic relief. And overall, though certain elements may strain credulity, Star Island provides enough pop cultural references and zany antics to make it a good read for adult Hiaasen fans and casual readers looking for an entertaining and humorous book.