Standing at the Crossroads 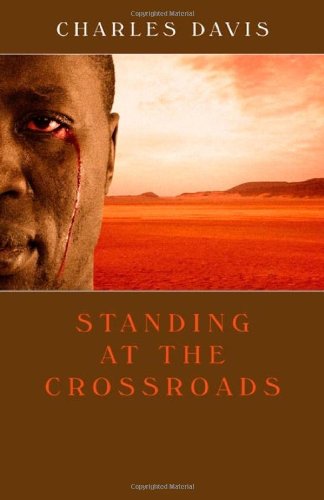 This is a remarkable journey through the real and imagined landscapes of civil war-torn Africa. It is a poignant, philosophical, sincere work that is by turns hopeful, harrowing, amusing, educational, and horrific. It is a thesis on the act of reading and it is “a love story, a poem to the people, and a celebration of the power of words.”

Standing at the Crossroads is the story of three people—a man, a woman, and a child—who are, each for their own reasons, fleeing across deserts, mountains and craters, to escape the terrifying clutches of the Warriors of God. It is a story set at the crossroads of conflicting ideologies, religions, and power structures. It is a story in which each character searches for the freedom to be able to tell their own stories in their own ways, despite, or in spite of the oppression they face. It is a story about finding a voice.

Mr. Davis writes: “There are many ways to tell a story, no single system that everyone must follow, and many ways of reading one, too, because reading is a private recreation that discovers different paths to the heart of each reader. Everyone must find their own crooked way.”

And in this way, Mr. Davis draws parallels between the journeys we take in both reading and walking, in escaping a brutal regime, and in experiencing our own stories. Men in power, men like the Warriors of God, do not like any deviation from the path, and they “do love a straight line, something unwarped by human eccentricity.” They like a single way of truth, they like the way that only the victors in war have the right to write the history. They like the way that all other voices are silenced.

Readers present a threat to their authority: “Readers are insatiably curious about the world and all its ways, we want to know everything, want to immerse ourselves in the many terrestrial pleasures of being and doing and watching and tasting and touching and listening and exploring paths trodden by other people, so we read in order to live, trying on lives we do not have the time, talent or leisure to live otherwise. Likewise, walkers are avid for life, seeing in every path another possible way into the world.”

Above all then, this is a tale about the redemptive power of truth, and it is the novel’s contention that “stories get nearer to the truth than facts.” Because stories, in their rambling way reflect life better and more effectively, and stories do not depend on one single viewpoint. Like Roland Barthes, Mr. Davis subscribes wholeheartedly to the theory of the Death of the Author and thrusts interpretative responsibility upon each individual reader. It is up to us, he says, to decipher the truth. “Storytellers may think they know what they are saying, may say what they want to say well, but the involuntary revelations they are also making must always be a mystery to them. Only the readers detect the accidental messages and interpret them, bringing them to life, only readers know in the end what is really being communicated.”

Named for an Elmore James blues number, Standing at the Crossroads is Davis’s third novel (after 2007’s Walk On, Bright Boy and 2008’s Walking the Dog). And although it is not a weighty tome in terms of word count—the 160 pages could almost render this a novella—the story here is so triple-distilled, unfiltered rich that it reads far denser. It is at once painted with broad-brush strokes of a moral fable and the intricate attention to detail of the best short fiction. This richness is condensed through its intertextuality; Standing at the Crossroads references classic literature (as well as songs and traditional oral narratives) throughout. And it nails its colors to the mast early, with the second line featuring those apocryphal words, “Call me Ishmael,” which echo another important book.

These opening lines also introduce us to the engaging voice of the novel’s narrator, a Sudanese local dubbed the Barefoot Librarian, an orphan raised and self-taught on donated books, which just so happen to be the classic literature of the west. The Barefoot Librarian wanders between villages, never quite belonging to any one place, and yet he fulfills an important role, almost that of the wise-man amongst the warriors, as the stories he collects and redistributes play a crucial role within that same society. “The books I carried on my back have rubbed into my flesh and bones. Sometimes they leak out again.”

As an insatiable reader and an enthusiastic walker, the Librarian literally embodies the parallels between reading and walking which Davis places at the heart of this novel. “Life is a labyrinth, but we read it in different ways. For men like the Warriors of God it is a labyrinth because they believe there is only one way to the heart of things and anyone taking the wrong path will be lost. For me it is a labyrinth like a good detective tale is a labyrinth, full of false trails and digressions that can be as engaging as the correct interpretation, a story in which there is no shame in going back and checking turnings you may have missed, because the journey is more important than what lies at the end.”

And yet the narrator is no cipher. Nor is he a stereotype. His voice is often the voice of reason amongst the madness and horror of the civil war, and, if handled ineffectively by Davis, he could have turned into a version of the ‘noble savage’, and yet he doesn’t. His voice coaxes, it doesn’t preach. It reflects, rather than judges. He never descends into melodramatic caricature, and he is no bleeding heart. Instead, he is an amusing, dry-humored commentator on events. A real person. He recognizes that his voice sets him on the edges of society: “I speak too formally, my language dated like the writers on whom it has been modeled.” And in his first exchange with Kate—a white American who is also traveling through the country in order to expose the atrocities being committed to the wider world—he announces himself with the admittedly verbose: “Excuse me, madam. May I be permitted to speak with you for one moment, please?” which causes some raised eyebrows on Kate’s part, a reaction he is used to. But, as he reflects, the reactions are at least a little better now he has “. . . learned not to ask to have intercourse with them.”

Later in that first chapter, he saves Kate from the threatened violence of the self-styled Warriors of God by confronting them with a boldly recited passage from Lewis Carroll’s Jabberwocky because “books always scare men (. . .) who covet power, particularly when their hold on power is uncertain or premised on violence.” He speaks with a voice set in the sensibilities of the 18th and 19th century books he’s carried all his life, and, when riled, uses outdated words such as “bounder,” “galoot,” “lummoxes” to great comic effect, but through his lively description and his boundless energy, he becomes someone who compels us to read on his own merits.

Here he is on his former tutor at the orphanage: “Fr. Gianni (. . .) his lips pursed in a pout of disapproval so tight that you could insert a bicycle pump in the other end and inflate him like a balloon until he floated away, a bubble of censure ready to burst at the prick of a pin.” He is also highly philosophical: “Books are (. . .) the shadow makers of the mind and, in the shadows they cast, we can see the shape of the sun, see something which is otherwise unbearable to watch.”

And much of what we are shown in Standing at the Crossroads is deeply unpleasant and, at times, almost unbearable. As Kate and the Librarian flee to Al Asher, their transport is attacked close to a small village where some of the war’s worst atrocities have taken place. And they meet a young girl along the way who is so scarred by events that she has lost her voice, become unable to tell her own story. The truth is a democratic process. “Books are nourishment and, like all nourishment, there is always enough to go round. Only it is not very well distributed.” Sometimes, the truth becomes confused: “That is the way of reading: reading people, places, books, we are always piecing together patchy information and trying to make a pattern. Sometimes the patterns we make are better than the pattern the author intended. Sometimes they are simply wrong.”

And yet, as Davis contends: “Whatever the text, be it a book, a body, or a landscape, how it is read can change everything.” Throughout the tragedy of what comes to pass, there remains some degree of hope. Through reading, we can help to effect change. Reading is a way of walking through the world, a walk accessible to those without legs or the liberty to use them.” It is a way for even the dispossessed to own something; their own story, and in Standing at the Crossroads, Mr. Davis demonstrates this brilliantly.

I’ll conclude with this piece of Barefoot wisdom: “A written story is a kind of cocoon, and no matter how well crafted, it stays that way until it is read. Then, if you are lucky, if it is read well, if only by a single person who understands the trick of it, it becomes something beautiful and takes wing. (. . .) it is a kind of redemption, but one that requires complicity.”