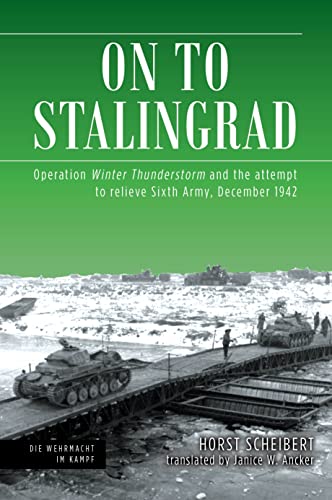 “as a narrative effort based on primary sources, On to Stalingrad offers a unique viewpoint from an actual veteran who is able to provide an immediate military analysis of this mostly forgotten operation of the Stalingrad campaign.”

The Battle of Stalingrad continues to generate intense interest as the 80th anniversary of the battle approaches. One of the lesser-known episodes of this titanic campaign is the German effort to break through the encirclement of their Sixth Army and rescue them from their cauldron established by the Soviet offensives of November 1942.

This book, one of a series of histories originally published in Germany in the 1950s has been newly translated and published just in time for this anniversary. The author, a veteran of the German Army in World War II, offers a different perspective and format of this critical campaign launched in December 1942.

Using radio logs, war diaries of the units involved, and after-action reports from participants, the book offers a nearly real-time primary recollection of the confusion and chaos of battle from an almost exclusive German perspective as they try to fight through superior numbers of Soviet troops and tanks to rescue their comrades from certain annihilation. The immediacy of these sources really shows how battles rarely go according to plan, and often the side that is able to react quickly to changing circumstances emerges victorious, even when heavily outnumbered.

Unfortunately, numbers always count a great deal in battles and the Germans, at the limit of their logistical and combat capabilities after months of heavy fighting, are unable to break through the Soviet defenses. As the attack gradually loses strength and Soviet reinforcements began a series of heavy counterattacks, the only hope of success is for the Sixth Army to assist in the breakout by fighting their way to the furthest advance of their attacking comrades.

Unfortunately, the hesitancy of their commander, Fredrich von Paulus, to defy Hitler’s no retreat order and the general lack of fuel and supplies for any concerted breakout frustrated the German plans. In the midst of the battle, the Germans are forced to choose between allocating scarce armored units to either continue the attack or ensure that other pressing Soviet offensives don’t cut-off other retreating German units attempting to withdraw from the Caucuses. The force assigned to this effort was simply inadequate and once the Soviet High Command began to recognize the situation, they had more than enough troops to blunt the attack.

Although the author does an excellent job of gathering the various primary sources together, the overall narrative that attempts to tie things together is sometimes confusing; and although the book has an excellent collection of maps, they were not translated from the original German, which makes it difficult to tie the maps and narration together unless the reader has at least some familiarization with German military terminology and map symbology.

However, as a narrative effort based on primary sources, On to Stalingrad offers a unique viewpoint from an actual veteran who is able to provide an immediate military analysis of this mostly forgotten operation of the Stalingrad campaign.