The Stalingrad Cauldron: Inside the Encirclement and Destruction of the 6th Army (Modern War Studies) 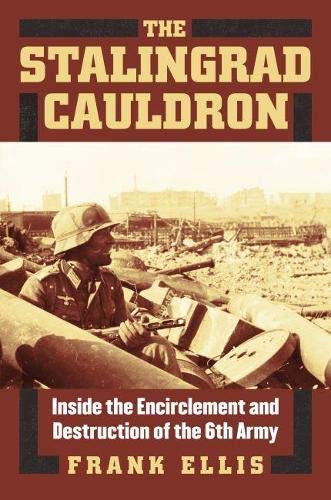 “. . . complete, straightforward, and rich in detail.”

The story of the battle of Stalingrad is well known to historians and the reading public in general and has captivated both groups since the end of the Second World War.

The German Army, apparently fully recovered from the near collapse that followed its inability to knock the Soviet Union out of the war the previous year, returned to the offensive in late June 1942. Once again, it drove the Red Army back on its heels, and either captured or threatened large swaths of territory in southern Russia.

Nevertheless, despite the image of invincibility promoted by Josef Goebbels’ propaganda mill, the Wehrmacht was unequal to the task assigned to it by Adolf Hitler.

In the late summer and early autumn of 1942, the German offensive lost its impetus. More importantly, the German Sixth Army, the Fuehrer’s most powerful force in the east, laid siege to the Russian city bearing Stalin’s name, only to find itself encircled and destroyed after over five months of vicious fighting.

In describing The Stalingrad Cauldron: Inside the Encirclement and Destruction of the 6th Army it seems appropriate to make clear from the outset that this is not a book with which one relaxes poolside while sipping a Margarita. Having recited this disclaimer, however, it is important to point out that in writing it author Frank Ellis has made a significant contribution to the historiography of the battle of Stalingrad.

Mr. Ellis comes from an academic and military background, and has previously written about the Eastern Front from the Soviet perspective. In this work, his sources include the existing wealth of secondary material on the battle, as well as original German and Soviet documents.

The Stalingrad Cauldron in fact is much more than a single book. In its first half, Ellis tells the story of the German experience inside the cauldron, principally through the war diaries of three German units, 76th Infantry Division, 16th Panzer Division, and 94th Infantry Division.

Mr. Ellis could not have chosen better sources than these documents. Like most German war diaries from the Second World War, they are complete, straightforward, and rich in detail. And like the book in general, the war diaries are nearly totally devoid of hyperbole, a characteristic that strongly enhances their credibility.

In the remainder of his work, author Ellis expands his narrative to include material that is both apropos a monograph on the battle of Stalingrad and well suited to another work of more narrow focus. Among the author’s topics is a well-focused chapter on the role of snipers on the Eastern Front, their weapons of choice, and their particular role on the battlefield.

A second such chapter concerns the recruitment by the Germans of prisoners, deserters and members of Soviet National Minorities, a source of manpower that ultimately proved vital to the ability of the German Army to continue fighting. Another is devoted to the role of espionage for both the Germans and the Soviets during the Stalingrad campaign.

As previously noted, The Stalingrad Cauldron is founded upon excellent source material. Yet it is the author’s analytical use of such material that makes his book so valuable. Everyone conversant with the Stalingrad battle, for instance, knows that the Soviet encirclement was complete and enforced for nearly three months during a particularly brutal Russian winter.

The author’s introductory chapter, however, reveals that the soldiers of Sixth Army were already in a depleted state before the Soviets surrounded them. With the exception of a few panzer and motorized infantry divisions, every unit in the German army marched to battle. This meant that German infantry who reached the Stalingrad area at the beginning of August 1942 had already marched several hundred miles during the previous six weeks, placing a tremendous physical and mental stress on each individual soldier.

Once the Soviet encirclement was complete, two additional factors battered the men of Sixth Army. One of them was hunger. Those within the Cauldron had already experienced a serious lack of foodstuffs since before the encirclement. But when Soviet troops cut Sixth Army off from the usual ground sources of resupply, leaving it to rely upon a pitiful stream of food and water delivered by air transport or dropped by parachute, daily food rations dropped precipitously.

Thousands of German soldiers, having contrived to avoid being killed or seriously wounded by the enemy, had not the physical resources to avoid death by exhaustion or hunger.

Even more destructive for the surrounded soldiers were the indescribably brutal weather conditions that they were forced to endure. By early November 1942 it was totally dark by 3:30 P.M. And in the first week of that month the temperature dropped first to 14F (November 7) and to 9F the next day.

After a December of oscillating temperatures, the period January 5 to January 18 saw temperatures range from –12F to –35F. Added to the cold air temperature, the troops endured bitter wind chills as low as –53F. To a soldier in only a thin uniform and underclothes, and already weakened by hunger and fatigue, exposure to conditions such as these must surely have constituted a death sentence.

Ultimately The Stalingrad Cauldron is a story about human suffering. In this particular case, it is the suffering of German soldiers, and by extension their families as well. And Frank Ellis tells their story with respect and compassion, and look where you will, it is difficult to find anyone, in particular a military historian, who extends respect and compassion to soldiers of the Wehrmacht and their descendants, right down to the present.

Frank Ellis presages his text with a brief paragraph from the pen of Annemarie Mueller-Andreesen, the daughter of a German soldier killed at Stalingrad:

“Then it was 2 February 1943, the fall of Stalingrad. I came home from school, and my little sister was playing very quietly in the children’s room. The door of the living room was ajar, and I saw our mother sitting bent over in front of the small radio. Tears were running down her cheeks. I knew at once what had happened. I opened the door and ran up to her. Without a word she stroked my hair. I shall never forget my mother’s pain.”

Fifty-five million people, more or less, are estimated to have died in the Second World War. Each of them had a mother whose loss we ought to treat with respect and compassion.