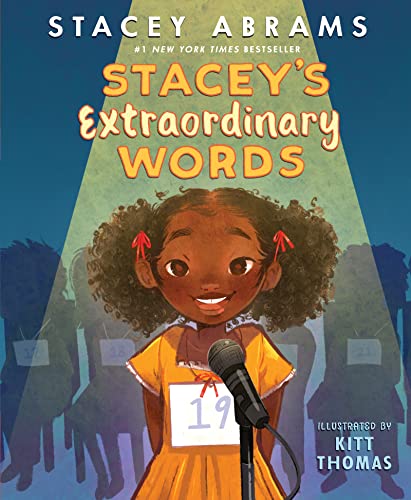 “this story exemplifies who Abrams is as a person as she continues to use her words to speak up about things that really matter. Stacey Abrams is, in a word, e-x-t-r-a-o-r-d-i-n-a-r-y.”

Abrams’ story starts with, “Stacey loved words. She loved to read and write and say them. She adored fun words, long words, unusual words. Words with wonderful histories and weird combinations.” She loved learning new words, like meeting new friends. The dictionary, a constant companion, too. Her Notebook of Extraordinary Words, a reliable record of her favorite words, like onomatopoeia and persnickety, and what made them special.

A glimpse into Stacey’s poignant inner world, “Sometimes Stacey thought that words understood her better than people did. When she sat by herself during recess, they never teased her about being quiet. Or about being clumsy when she fell. Or awkward when the joke in her head came out wrong. . . . Words understood why she was grumpy or anxious. In fact, words helped her explain what she was feeling—if only to herself.”

Stacey’s Extraordinary Words is structured around a spelling bee, which begins when her teacher nominates Stacey as a contestant. Digital illustrations by first-generation Saint Lucian author-illustrator Kitt (aka Katelan) Thomas are vibrant, colorful, and playful—and capture the character of Stacey as she navigates this spelling bee journey with fear, competitiveness, excitement, disappointment, and ultimately perseverance. The competition becomes particularly tense when Stacey’s primary opponent is Jake, an intimidating school bully. And the spelling bee itself nudges Stacey out of books and in front of people.

After a week of studying, the day of the spelling bee arrives. One by one the students step up to the microphone to spell their words. A correctly spelled word, and the student goes to the next round. A mistake, and the bell rings, signaling that the student should leave the stage. In the end, it came down to Jake and Stacey. Jake wins and rudely points out to Stacey, “At least I know the difference between i and e.” Though embarrassed to lose, Stacey remains courteous and appreciates even more that, “words are a gift that shouldn’t be used to hurt people.”

Furthermore, Stacey realizes that things do not always turn out the way one would want or when one would want them to happen. Stacey feels like she failed, but Stacey’s mother points out to her daughter, “You only fail if you stop.” That’s when Stacey really embraces one of her favorite words p-e-r-s-e-v-e-r-a-n-c-e and decides she has a future of “new words and new ways to speak up and help others.” Indeed, this sentiment is underscored in Abrams’ Author Note, “My first spelling bee combined my greatest joy and biggest fear: talking about words and making mistakes. . . . Because of that first lost spelling bee, followed by four more close calls until I claimed victory in sixth grade, I discovered how to merge my delight and my terror, realizing that failure is never more than an invitation to try again.”

Stacey’s Extraordinary Words is Abrams’ autobiographical account of her love of words and how she has come “to use my words to do good, even when I am most afraid.” Furthermore, this story exemplifies who Abrams is as a person as she continues to use her words to speak up about things that really matter. Stacey Abrams is, in a word, e-x-t-r-a-o-r-d-i-n-a-r-y.