The S.S. Officer's Armchair: Uncovering the Hidden Life of a Nazi 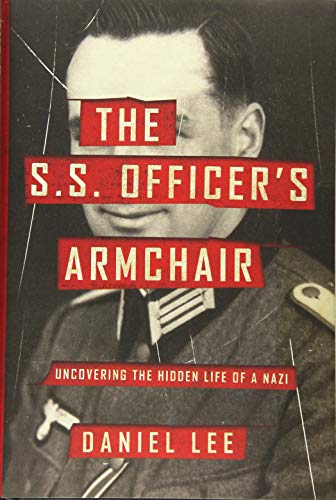 By this time, everyone should have at least some passing familiarity with the atrocities committed by the Nazi regime of Adolf Hitler as well as the postwar legal proceedings in Nuremberg which were held in order to ensure that those responsible would be held accountable, the so-called “big fish.”

However, with the postwar chaos, destruction of records and the financial cost of prosecuting everyone who was complicit, it was inevitable that some “small fry” would slip through the cracks. Indeed, some could not be found, assumed false identities, were killed or died during the war and obviously could not suffer additional consequences.

This publication is about a largely unknown, essentially faceless Nazi bureaucrat who administered or enforced Nazi laws and policies but was just as complicit even though he did not literally pull the trigger when it came to the terror and repression exacted against the many perceived enemies of the state.

What is most interesting and intriguing about this story is that it is multi-purposed, if you will. Author Daniel Lee, a British World War II historian whose Ukrainian-Jewish family suffered in the Holocaust, initially tried to determine the reason why and the who of how certain personal documents of an S.S. Officer and lawyer ended up in the cushion of an armchair, discovered some 70 years later when it was taken to be re-upholstered by its present owner in the Netherlands.

As a result, this is not only an investigative story but also a biography as the author has tried to piece together the life of Gestapo and S.S. lawyer, Robert Griesinger, through surviving records but also research in extant government archives and interviews with his relations and surviving family members in an attempt to better understand how someone could facilitate the racial and other repressive policies perpetrated by the Nazis all over Europe.

In the course of his research, Lee discovered, among other things, that the S.S. Officer and Gestapo lawyer's family had a 19th century connection to the American South, which may have had an effect on his racial and nationalist views after his antecedents returned to Germany.

He also traced his military service and the route taken by his infantry division (a map of which is included) during the invasion of the Soviet Union and determined that Griesinger could possibly have been present or at least in the vicinity of a mass killing in which some of the author's own relations were executed.

Given the nature of Griesinger's activities during his career, it is somewhat surprising that he was able to engage Griesinger's daughters and other family members. Postwar, most families tried to ignore, refused to discuss with their children, or downplayed any knowledge of or complicity in Nazi crimes. As it was, the family was largely interested in founding out more about Griesinger's life through Lee's investigation yet were also unable to shed any further light on the documents in the armchair.

Those documents were two passports and other personal papers. The obvious assumption is that Griesinger put them there himself, perhaps to deflect any suspicion from himself as a Nazi during the Prague (Czechoslovakia) Uprising at the end of the war or because he planned to assume another identity. In any event, it ultimately did no good other than to provide future generations with a mystery.

Other than some odd or awkward, presumably British, terms, expressions or language in the text, this is a very well researched publication, employing information from the family interviews to German language archival documents and other secondary sources. Throughout the text are many family and other contemporary photographs which give a much more personal and intimate look at the subject's life and time.

Besides the map mentioned above, there is another which traces his unit's route through France in 1940. A list of illustrations is included as well as one of dramatis personae to which the reader can refer to keep track of who was who during the course of the story.

Although it cannot be precisely determined how the documents ended up in the armchair, this is a story that shows how even the most “mundane,” faceless, desk-bound bureaucrat's life can be restored and scrutinized to help us understand the thought processes of even just a small cog in a defining moment of the 20th century.