Square Haunting: Five Writers in London Between the Wars 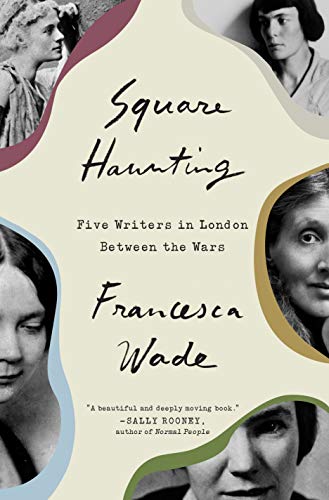 “’I began to suspect that what H. D., Sayers, Harrison, Power, and Woolf herself were seeking in Mecklenburgh Square was everything Woolf had urged woman writers to pursue: a room of their own, both literal and symbolic.’”

One summer evening in 2013, Francesca Wade, a native of London, happened to walk through Mecklenburgh Square, an area on the eastern edge of Bloomsbury. Wade, a journalist and the assistant editor of the acclaimed literary journal, The White Review, was intrigued to discover that two of her favorite writers, Virginia Woolf, and the poet known as H. D. had both resided in addresses on the square.

“Gazing up at the firmly drawn curtains above H. D.’s weather-worn blue plaque . . . I tried to imagine the conversations that had taken place just a few meters away, almost a hundred years earlier.”

On learning that many other women writers had lived on the square, she was inspired to investigate further. “I wanted to know what had drawn these women here, and what sort of lives they’d lived in these tall, dignified houses where they had written such powerful works of history, memoir fiction, and poetry . . .”

The result of Wade’s project is an in-depth, meticulously researched account of the lives and work of five women, all of whom lived in Mecklenburgh Square at some point in the early decades of the 20th century. In addition to Woolf and H. D., the book focuses on Dorothy L. Sayers, best known for her detective novels; Jane Harrison, a classical historian and linguist, as well as the first woman in England to have an academic career; and Eileen Powers, an economic historian and the second woman to be appointed to the Chair of Economic History at the London School of Economics.

Wade’s point of entry into these accounts is the notion that they were all not only gifted and ambitious, but set out to stake a claim for themselves at a time when women were not expected, or encouraged, to partake in public life. The idea of renting a flat, embarking on a career, and devoting themselves tirelessly and solely to their work, was unusual and in many ways, subversive. Wade writes, “I began to suspect that what H. D., Sayers, Harrison, Power, and Woolf herself were seeking in Mecklenburgh Square was everything Woolf had urged woman writers to pursue: a room of their own, both literal and symbolic.”

In many ways, the book portrays a realization of Woolf’s vision. It depicts how the possibility of securing a living space enabled these women to not only invest crucial time and energy in their work, but also define their lives and identities on their own terms.

Likewise, its subtext shows how a rare combination of the right time, place, people, and circumstances all combined to create opportunity for women where there had, up till that moment, had none. As Wade puts it, “These chapters capture each woman in a moment of transition, of hope tempered by uncertainty, as she left behind a version of herself in the home or community she was abandoning, and sought to reinvent her life in a new place. . . . During the time all these women spent there . . . they produced groundbreaking writing, initiated radical collaboration, started (and ended) significant relationships and thought deeply about their values and ambitions.”

The book takes an erudite, analytical tone, offering a depiction that is more biography than narrative. It also makes a point of showing how these women, while not necessarily knowing each other personally, were inspired by each other’s work. For example, “Harrison’s work gave Woolf a new, subversive model of history which informed all her subsequent novels and essays: one whose revelations offered powerful ‘mothers’ for women to ‘think back through.’ And which revealed as man-made—and flimsy—the construct on which patriarchal society rests.”

Wade closes the book by considering what remains of the legacy of these trailblazing women. “It is one thing for women to become successful in their own times; it is another to ensure that their work is remembered after their deaths.”

Her conclusion, which provides a detailed portrait of what became of each woman after her time at Mecklenburgh Square, raises troubling questions about the way that women’s work and writing can easily slip out of public view and cultural memory. Yet this book offers a sort of correction; by framing their stories around the small London neighborhood that set the scene for their struggles and successes, it offers an inspiring perspective on what they each achieved.

Janice Weizman is the author of the award-wining historical novel, The Wayward Moon. Her writing has appeared in World Literature Today, Ha'aretz, Queen’s Quarterly, and other publications. Additionally, she edits the website Reading Jewish Fiction, where novelists and writers engage with recently published books.