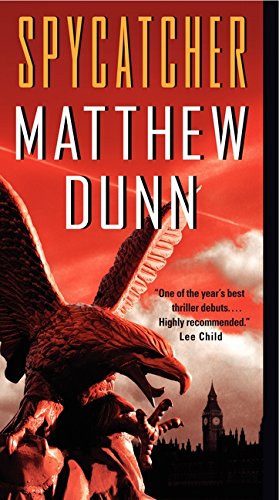 “[Spycatcher] is timely in its topic and credit should be given to Mr. Dunn for applying his experience to designing a suspense thriller. He wraps up the story with some interesting twists and turns, and leaves things open for Will Cochrane to return to the fight.”

Testosterone alert! Matthew Dunn’s debut thriller, Spycatcher, provides us with an interesting, albeit at times implausible, protagonist in Will Cochrane: a man who makes life and death decisions based on his own sense of right and wrong and who comes across as Captain America working for MI6 as an invincible English hero whose fight for the disadvantaged is his sole motivation.

The story begins with a slam-bang opening that finds Will as the handler of an Iranian double spy who is set to meet another spy in Central Park. The meeting goes bad quickly, and Will (with very little help from his comrades) annihilates about a dozen Iranian terrorists and the Iranian spy in the middle of the day in Central Park, NY.

Will is taken into custody and finds himself in the hands of Patrick, a mysterious CIA officer, who informs Will that upon his return to England, he will be assigned to an especially difficult project, by Alistair, Will’s handler. The pace ramps up as Will learns the details of his new assignment: to find a mysterious Iranian, Megiddo, who plans a major attack—possibly in England or in America. Will’s handlers warn him that Megiddo may be Will’s equal in every way.

Will begins his research into this man, and with every step, bodies begin to fall. In the midst of unearthing information, Will uncovers new details about his own family background, including that his father was held captive for seven years by Iranian Revolutionary Guards until he was tortured and killed by the very man Will now hunts. Will's character begins to unfold as a complex man: on the one hand, driven to achieve righteousness even through murder and torture; and on the other hand expressing compassion for the underdog.

To establish a plan, Will gains the confidence of a shady character who sells military equipment to the highest bidder. Through this man, Will learns that Megiddo had a lover, Lana, who he abandoned several years earlier. Will searches out Lana and discovers the woman’s hatred for Megiddo. Will uses this hatred to his advantage and draws Lana into a detailed scheme to bring Megiddo into the open where he can be captured and his plans uncovered. As Will learns more about Lana, she becomes his love interest, giving him added motivation to ensure her safety.

Although primarily a loner, Will is joined by a crack team of CIA operatives and the story moves throughout the glamorous hotels and dangerous back alleys of Europe as Will, Lana, and the others chase the elusive terrorist. Lana, constantly under guard from the team, is also tagged by several Iranian surveillance teams working on behalf of Megiddo. The ISTs lose all of their initial members to Will's attacks; subsequent teams meet the same fate. Then the French secret services enter the scene and are also ultimately dispatched by Will’s team.

When Lana is kidnapped by Megiddo, the team chases the terrorist across Europe and ultimately to the east coast of the United States. Just when Will thinks he has identified the terrorist’s target, it becomes apparent that he is mistaken, and the chase continues, leading to the final confrontation between these two supermen.

Mr. Dunn relies on numerous flashbacks to give insight into Will’s motivations, but the events that shape his life are sometimes confusing. Although learning the reasons for his motivations is important, they appear as tools of convenience more than anything else.

At times, both the dialogue and the narrative feel stilted, and the writing is more passive than active; in some instances Mr. Dunn misses the potential for accelerated pacing because he details things like traffic patterns and directions to the point of sounding like a GPS system on steroids. Other times his presentation of events is confusing and implausible—such as the entry of the French into the story, in which we never truly learn why they were brought into the story; then their exit proceeds as rapidly as their entrance. As well, through much of the story, the Iranian surveillance team is either stupid or incompetent; they seem to be incapable of remaining invisible as they attempt to carry out their assignment(s).

Yet there are places where the narrative is well paced and gives us a brief inclination to speed-read.

For the most part, Mr. Dunn’s story follows a straight line, but he does take some side trips throughout, such as searching for Lana’s rapist of years ago, finding him, and murdering him. Although some may see this as a satisfying end to an evil person, in reality it is a side trip that takes the reader away from the focus of the story.

On the whole, getting past the writing style and the superhero characterization, the story itself has merit: it is timely in its topic and credit should be given to Mr. Dunn for applying his experience to designing a suspense thriller. He wraps up the story with some interesting twists and turns, and leaves things open for Will Cochrane to return to the fight.