Springfield Confidential: Jokes, Secrets, and Outright Lies from a Lifetime Writing for The Simpsons 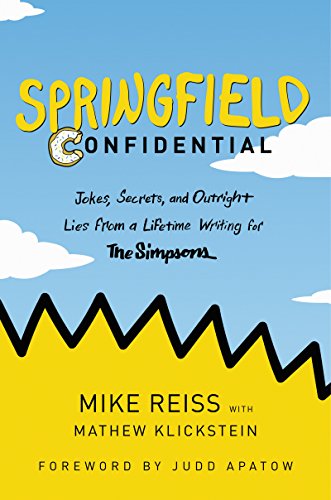 “I got the Simpsons job the same way I got a wife,” writes Mike Reiss. “I was not the first choice, but I was available.”

No matter, as he confides at the beginning of Springfield Confidential: Jokes, Secrets, and Outright Lies from a Lifetime Writing for The Simpsons, the first insider’s take on the long-running show.

In 1989, he writes, “Nobody wanted to work on The Simpsons. There hadn’t been a cartoon in prime time since The Flintstones, a generation before. Worse yet, the show would be on the Fox network, a new enterprise that no one was even sure would last. . . . After eight years writing for films, sitcoms, and even Johnny Carson, I was now working on a cartoon. I was twenty-eight years old and I thought I’d hit rock bottom.”

The unanimous view among the madcap young writers was that the show wouldn’t last more than six episodes, so they might as well have fun.

If there is anyone who should know what’s behind the curtain of The Simpsons, America’s favorite family sitcom, it’s Reiss. He is one of the very few of the long-running show’s writers who was present at the series launch, in January of 1990, and who is still helping churn out episodes.

Springfield Confidential is the latest in a seemingly neverending (but clearly waning) stream of books about the series. Reiss and co-author Mathew Klickstein have written it to mark the show’s 30th anniversary—and also airing its 636th episode, which makes it officially television’s longest running series, eclipsing Gunsmoke.

It’s a fast, breezy read—even some of the jokes that didn’t make the final script are laugh-out-loud funny:

A sign in the window of a diner serving only chicken wings and potato skins reads: Thank you for eating our garbage. Or convenience store proprietor Apu’s advice to expired donut purchasers: “If the sprinkles are moving, don’t eat them.”

The critics have said, repeatedly, that The Simpsons is “a show that rewards intelligence.” Which is to say, the smarter you are, the closer you pay attention, the funnier it is. No matter how many times you watch the episodes. As Reiss learned from writing for Alf, a wise-cracking alien puppet: “Don’t write the show for the kids; write it for the parents who will be watching with their kids.”

One of the secrets of The Simpsons’ success is that it is labor-intensive—there are 23 staff writers. Reiss and his longtime writing partner Al Jean met at Harvard, where they became roommates and worked together on the Harvard Lampoon magazine. Over the years the show’s writing staff has included 40 Harvard alums, likewise charter members of Hollywood’s “Harvard Lampoon Mafia,” including law school grads and at least three Ph.Ds. From the beginning, there was an obsession with factual accuracy, even on the most trivial points. “Unlike in college,” Reiss writes, “the Simpsons writers do their homework.”

Some of the show’s notoriously ardent and exacting fans may have some gripes: Reiss denigrates much of the academic interpretations of the series, and occasionally a little smugness bleeds through his prose.

But for the most part, the book lives up to both its title and subtitle. The main, dishy reveal, which is not entirely new, is the genesis of the bad feeling between the late Sam Simon, a brilliant co-creator, and the cartoonist Matt Groening, to whom the rapturous media gave most of the original credit. As Groening admitted to LA Weekly in 2007, “I’m one of those people who gets more credit than I deserve.”

Although the show focuses on the family’s Protestant faith—the church sanctuary is one of the few places where nearly everyone gathers each Sunday—there is a section headed “Other Religions Are Funny Too.” The show has an ongoing interest in non-Christian faiths, and Reiss confirms the widely suspected explanation why it took so long for the writers to get to Islam: fear.

Reiss, a four-time Emmy winner for his work on the show, and Klickstein have probably pulled a few sensitive punches along the way.

On one controversy, Reiss makes the dubious claim that the show’s bosses never considered replacing the high-priced voice talent—“We’d never dream of replacing them with cheaper soundalikes.” This, despite numerous media reports to the contrary, based on Fox leaks during periodically contentious contract negotiations.

For someone like me, who has screened virtually every episode through 2016, and attended both a table read and a taping session, there are still some outstanding questions. Reiss doesn’t explain the profusion of modifiers of the director and writer/producer credits (“co-,” “consulting,”  “executive,” “supervising”). What exactly do these people do on a given episode? More importantly, how much are they paid? Now that information would qualify as “confidential.”

The section on how each episode is constructed can be, as Reiss warns, a little draggy. Like sausage and legislation, the making of comedy may not be something you want to get too close to. In the case of The Simpsons, episode creation can resemble an industrial-scale, literary assembly line, lasting nearly a year. But Reiss is good on what it is like to be in a high-pressure writers' room. In this case, he says, the individual writers are temperamentally much more like Lisa than Bart.

Ratings for new Sunday night, prime time, Simpsons episodes have been on a steady decline from the early years, when the show was consistently in the top ten, especially among men aged 18–34. (Although Season 29 experienced a modest ratings bump.) The show still airs in 71 countries, but is most popular in Latin America, where dialogue is dubbed in Spanish by a Mexican cast. In 2016, a Trump-themed animated Simpsons short got 12 million downloads on YouTube.

Despite the ratings slump, the cartoon sitcom remains a potent, if sporadic cultural force. A 2018 a documentary entitled “The Problem with Apu,” sparked a debate in the airwaves, print, and social media about stereotypical portrayal of Springfield’s good-hearted convenience store manager. The conversation spilled over into the larger issue of the image of South Asian immigrants and their children in American popular culture.

Hank Azaria, the Jewish actor who voices Apu, said in numerous interviews that he would be willing to put the character away if it is hurtful. In Confidential, Reiss dismisses “The Problem with Apu” as a “nasty little documentary”—an uncharacteristic cheap shot—and then proceeds to agree with its premise: “As a white Jewish guy, I can’t tell Indians not to be offended by another white Jewish guy playing an Indian.”

“Why does the show endure?” Reiss asks. “Because it’s based on two fundamental principles: family and folly.” It is in the intersection of the two that lies the genius. “Family never changes: it’s a bunch of people stuck in a house who love each other while driving each other crazy.”

“When will The Simpsons end?” he follows. “The day people all over the world start treating each other with love, respect and intelligence . . .” Which is to say, probably never.