Spring and Autumn Annals: A Celebration of the Seasons for Freddie 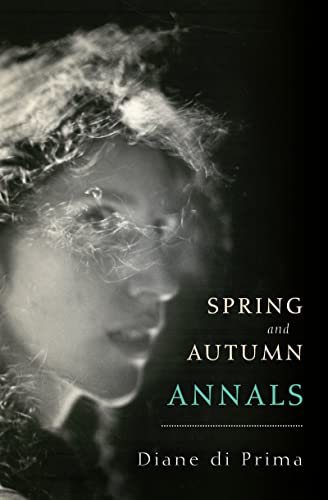 “In Annals, Diane di Prima’s imagination is on fire and her memory is as precise as ice. It’s a winning combination.”

Visitors to Diane di Prima’s apartment in San Francisco would comment on the banker’s boxes that crowded the rooms and made it difficult to move around, not only for the visitors themselves, but also for di Prima who died on October 25, 2020, at the age of 86, the mother of five children and the author of a Beat classic, Memoirs of a Beatnik, a lyrical manifesto of the counterculture Revolutionary Letters, and an epic feminist poem, Loba.

To those three books one can now add Spring and Autumn Annals that di Prima wrote in the mid 1960s, after the death of her friend Fred Herko, a dancer, choreographer, and musician who was an early member of Andy Warhol’s Factory.

For years, the manuscript for this book sat in a box in di Prima’s apartment. Now that it’s finally in print from City Lights, her longtime publisher, it’s cause for rejoicing for fans of di Prima, and for aficionados of the Beat Generation, which she insisted was a state of mind and not tied to any decade or specific years.

Several times in Spring and Autumn Annals, the author explains that she is “in love with obscurity.” One can understand why she would say that.

The publication of Allen Ginsberg’s poem Howl in 1956, showed her. as she explained in Memoirs, that he spoke for her and for many others and that “A new era had begun.” Still, it wasn't until 1969 that Memoirs was published, first by Olympia Press in Paris.

In that book di Prima explains many things to her readers. When she writes, for example, about Alexandra David-Neel, an anarchist and Buddhist, she says that she died at the age of 100 in 1969. Anarchist and Buddhist and fit di Prima, herself though she was born into an Italian American family and raised in the Catholic Church that she never entirely left. In Annals she enters church and lights a candle and adds that she did not pay and that it was “For Mary. The only one I can trust at all.”

All through Annals, there is great writing, beautiful writing and writing that is intellectually and emotionally moving. The author follows the seasons from fall through winter, to spring and summer and back to fall.

She describes her life in New York and her travels to California, and she offers snapshots of Michael McClure and Ginsberg, but she doesn’t provide the reader with background or biographical information about them.

To a critic who once complained that she wrote poems about individuals that readers would not recognize, she said, “They can go to Google.” That is true for Annals. Readers can go back again and again, though it isn’t compulsory.

One doesn’t have to have facts about Timothy Leary, Le Roi Jones, Kirby Doyle, and others to follow the play of di Prima’s nimble mind which records, sometimes under the influence of LSD, sights and sounds, feelings and ideas.

The seasons of nature shape the seasons in di Prima’s head and vice versa. She maps her moods like a meteorologist of the inner life and explores doggedly, lovingly, and respectfully.

She resurrects her own childhood during World War II and remembers “the heavy sadness of those 40s years, the radio, the house full of people speaking Italian.” But she doesn’t linger long in the past. In fact, she makes plans for the future. “I will buy a flute and a piece of jade, write occasional verse, keep a journal,” she says, and takes a deep dive into her complicated relationship with Le Roi Jones and his wife, Hettie, a friend of di Prima’s.

Hettie was having an affair and wanted Jones to accept it as she accepted his affair with Diane, who promised to talk to him. “I gave it to him straight from the shoulder, and he took it badly, muttering about middle-class morality (Hettie’s) which I thought was a turn-about and still do,” she writes and adds, “Made love till almost dawn.”

There’s a certain New York heaviness to di Prima’s tales of love and death; after all, Freddie Herko died at 29. That’s heavy.

But there’s also playfulness, as when di Prima and a friend walk across NY with a crate of books which they set down on the pavement and rest. “Behold,” she writes. “It was a room, it was our house.” She adds “right there on that windy corner we knew it then and still know it now.”

Di Prima could and did make a home for herself in NY, SF, and elsewhere. She blazed a trail few others have followed, perhaps because they haven’t been brave enough or imaginative enough or not as willing as she to mythologize herself and eschew the rule of fact.

“All power to the imagination,” di Prima would say. In Annals, Diane di Prima’s imagination is on fire and her memory is as precise as ice. It’s a winning combination.