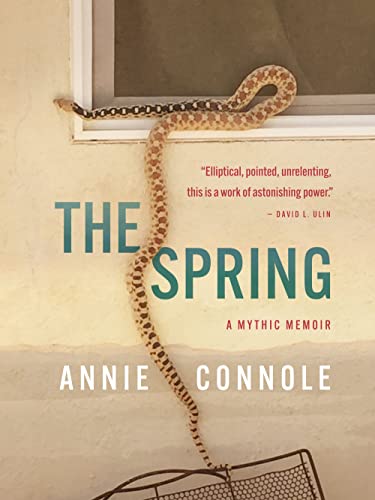 “Throughout The Spring, Connole’s experience of grief, translated into prose and photographs, creates a spare, rugged alchemy.”

With the rugged landscapes of the American West as the backdrop, The Spring by Annie Connole combines prose and photography in a “mythic memoir.” Connole tells a tale of a woman processing her grief about the loss of “the painter” from her life. In her grief, the narrator speaks with animals like Snake, Owl, and Dragonfly. On a surface level, Connole’s memoir bears resemblance to fairy tales, specifically humans talking to animals. But more lurks beneath the surface in this slim volume.

To academic taxonomists and bookstore marketing staff, The Spring is ostensibly classified as prose and nonfiction. The text and images within reveal something more grandiose and complex. Yes, this mythic memoir is a narrative of grief. Yes, the text is arranged in what appears as prose. Yet The Spring has more in common with the poet William Blake’s shorter prophetic books. Those brief visionary works somewhere between the brief lyrics of The Songs of Innocence and his epics like Milton and Jerusalem. Connole’s memoir is like a modern version of Blake’s The Book of Thel. There’s also a bit of Ted Hughes’s Crow in here, since Nature is not simply the beautiful and peaceful, but teeth, claws, and death.

In a section labeled “Horse,” Connole writes: “At the end of summer, as waterfalls pour through my cavernous heart, I go out to greet Horse by his stall, trying to take comfort in his gaze, as the painter once did. / Tears get in the way of everything.” A simplicity betrays the writing. This memoir is indeed mythic, these brief narratives reaching down into a place more primordial and ancient. It is an antidote to this hyper-media-driven age. With information, disinformation, and misinformation a click away, The Spring provides a rare reprieve from modern data glut. Its rewards are offered slowly and benefits from a savoring of the text. This isn’t a waterfall, it is the drawn-out drip of sap from the maple tree.

Yet it is not only the words that hold the power. Photographs also play the part. Set amid the American West, Connole shoots with precision. Mixing black and white, landscapes with portraits, the photographs reflect the prose. (Again, like Blake’s marriage of poetry and watercolors.) “From behind the most ancient pine, Fawn peers out at me, big ears open to the sounds of ice melting in the morning sun. We watch each other for a long time, breathing white whispers of fortune for the year to come.” On the opposite page, a color image of a fawn standing behind a snow-covered tree. On itself, the prose may come across as too saccharine, too cute. The photograph, without the context given by the prose, would be yet another garden variety deer image. Connole brings both together to create a product greater than the individual parts.

Throughout The Spring, Connole’s experience of grief, translated into prose and photographs, creates a spare, rugged alchemy. A kind of animist Cormac McCarthy, a beautiful American West minus the toxic masculinity of No Country for Old Men. Connole lives in the Mojave Desert and earned her MFA in Creative Writing from the University of California Riverside—Palm Desert. In an already over-saturated genre, Connole’s memoir offers an idiosyncratic treatment of a universal experience. At the same time, her expert blend of prose and photographs exhibits how the memoir as a genre can be a site of artistic innovation.