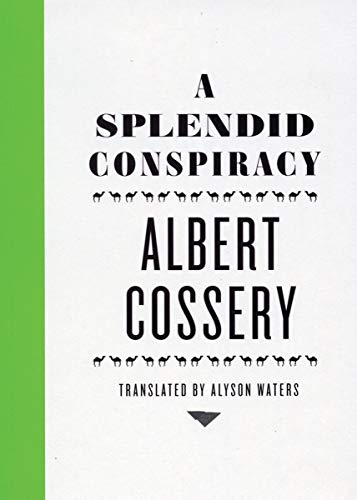 “An ambitious guy is not a good guy for long,” Medhat tells his friend Teymour, two young men who form a small group of lazy discontents, seeing the world as nothing but folly and toying with others’ lives for mere amusement. Then Teymour returns from abroad, to the city of his birth and his childhood friend. His initial depression and scorn about being stuck back in the provincial backwater—“It was as if everything he saw had a gift for reinforcing his suffering.”—are soon erased by Medhat and their actor friend, Imtaz. Medhat removes the blinders from Teymour’s eyes with the hope of uncovering all of the debauchery, lies, and buffoonery that surround them. “Medhat had no reason to criticize the town where he’d spent his whole life. Beneath its deceptive and admittedly depressing appearance were concealed great gifts of madness and murderous rage capable of competing with any world capital. ” The author, who moved to France from Egypt as a teen, does a remarkable job of making a group of malcontented intellectual bums, living off deceit and others’ woes, sympathetic characters who toy with the powers that be and thus create their own sense of freedom and purpose. The one character who is despised, for a variety of despicable and dastardly deeds, by everyone in this social circle of narcissism, is Chawki. As the story progresses, there are increasing attempts to humiliate and bring down this villain—or kill him outright. Chawki’s character incorporates many of the same characteristics that were embodied in Nabakov’s famed Lolita, in the guise of Humbert—multiplied to the tenth degree. The only woman in the story with any depth or personality is Salma; she has also been abused and wronged by Chawki. All of the rest of the females in this book are portrayed as sexual objects or possible future conquests. In any other context or story, this would set off alarms in the reader’s mind and distract from the enjoyment of the tale. In A Splendid Conspiracy, this disregard for a realistic depiction of the feminine is an intricate part of the atmosphere and characters’ mindsets and lends more weight to the telling. Albert Cossery has succeeded in writing a play within a play that unabashedly provides no hope or sense of anything in life having purpose or meaning. It is this solemn view of the world that is quite sobering for the first few pages and somehow liberating and enthralling as one continues. Ambition and desire can indeed be deadly. Absurd behavior and human folly are always tripping over themselves to get our attention. If we chose to look at the world from the perspectives of the likes of Teymour, Medhat, and Imtaz, they would get more than just our attention. They would rob us of our souls. Reviewer Gabriel Constans’ latest books are the novel Buddha’s Wife and the collection of short stories, Saint Catherine’s Baby. He is an advisor to the Rwandan Orphan’s Project and on the board of directors of the Ihangane Project, which works to provide health care, education, and livelihood to women and girls in rural Rwanda.