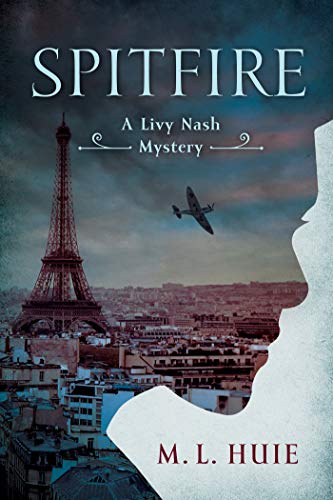 “Huie has taken this story and twisted it like a pretzel. And like a warm pretzel with lots of salt and mustard, this one is satisfying to the very end.”

It’s 1946, London England, and Olivia “Livy” Nash is a young woman whose life has turned upside down. After spending the war years working for British intelligence, assigned to assist the Maquis, the French Resistance, she finds herself working for a third-rate newspaper as a proofreader, drinking her way through a lonely life, and mourning the loss of her lover, Peter Scobee.

Scobee’s death was at the hands of Luc, a traitor to France and the Allies, a man who used the skills of the British and French spies to better his own position with the Germans.

When Livy finds herself without a job and almost without a place to live, she is approached by one Ian Fleming, a man with a network of agents still hard at work throughout the world trying to set things straight and at the same time outwit the Russians. Fleming knows all about Livy’s history, and he has a job for her. Considering her current state of affairs, she meets with Fleming.

Fleming’s goal is to obtain a list of agents still operating undercover before the Russians can get it. And Livy is just the person to take on this task. Of course, there is a downside. The person who has the list is Edward Valentine, aka Luc, the very traitor who was responsible for the death of Livy’s lover, Peter Scobee.

Upon agreeing to the task, Livy is first sent to a Mrs. Sherbourne, who attempts to teach her all the proper things to do in the high-class society she will be traveling in. Livy is obstinate, but soon comes to terms with her teacher. Her first assignment is to attend a gala ball where she will be met by someone who will give her a roll of microfilm. The ball is a success, she receives the microfilm, and within minutes of leaving, she is accosted and kidnapped by a Russian, who relieves her of the film.

Having failed at her first assignment, and regardless of whether she even has a job to return to, Livy is determined to correct the situation on her own and fulfill her obligation to Fleming. As she starts her journey, she encounters an American intelligence agent, Thomas (Tom) Vance, who is also searching for Valentine and the agent-list for the Americans.

The relationship between Livy and Tom has its ups and downs. Just as Livy is about to move forward, Tom appears seemingly out of nowhere. It does not take Livy long to realize that Tom is following her. Livy soon learns that her Russian contact, Mirov, and her American trailer, Vance, both want Valentine for different reasons. The Americans want him on the US payroll; the Russians want him for his crimes.

She is led to a French theater where plays of murder, mayhem, and chaos are the order of the day, and there she sees a magician who demonstrates a card trick that Livy has seen in the past. An agent named Mephisto comes to her attention; he is the real leader of a network of spies who are set to work against the Americans, the Russians, and the British—all for money.

Now Livy is put in contact with a mysterious woman—Nathalie—who holds the second half of the network list that everyone seeks. Nathalie is Mephisto’s lover, but an abusive one, and Nathalie is looking for a way out. She is ready to turn over the list, but only to Livy.

The action ramps up when Livy learns that Edward Valentine (Luc) has been taken prisoner by the Russians and is about to be shuttled back to Russia for trial. Livy’s memory of Peter’s death at the hands of the traitor, Luc, forces her into action. She meets the Russians before they can transfer Luc, and a gunfight ensues, ending in the deaths of Mirov and Luc. But the question arises: Who murdered Luc? It was not Livy, and yet a gun was fired, the man is dead, and Livy is now on the run from the Russians, the Americans, and the British.

Livy continues to follow the clues that are laid out before her, with the Americans hot on her trail, believing she is the one who killed Luc. With the help of her British contact in France, Dennis Allard, she meets with Mephisto.

No spoiler alert here. Huie has taken this story and twisted it like a pretzel. And like a warm pretzel with lots of salt and mustard, this one is satisfying to the very end. Mephisto’s identity comes as a surprise to the reader, and how Livy solves this mystery is very rewarding indeed.

It appears that there are more adventures in store for Livy Nash, and could Tom Vance be far behind? Huie’s story flows well. His characters are well developed, and the reader takes a good ride on Livy’s shoulder as she wends her way through the many pitfalls Huie has put before her. A good book and the start of a good series.