The Spirit: A Celebration of 75 Years 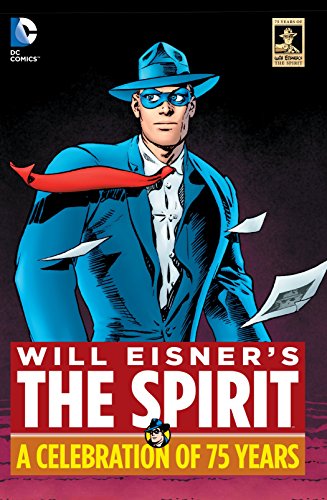 With a mixture of the violence that Dashiell Hammett brought to Red Harvest, the wild characters that filled the stories of Damon Runyon and the humanity at the center of O. Henry’s best work, Will Eisner’s The Spirit proves that comic books can be literature as well as fun.

And he did it with some of the greatest and most influential art ever seen in a comic book. In the way his art challenges your eye, the narrative often grabs you by the heart or mind and won’t let you go.

Stories published under the banner of The Spirit are literate, touching, funny, and as action-packed as you could hope for in a comic. Publishing a different, seven- or eight-page story every week, Eisner moved across romance, action, adventure, tragedy, comedy effortlessly. Often in the same story.

The new anthology The Spirit: A Celebration of 75 Years holds over 50 of the original stories from The Spirit’s initial 12-year run from 1940–1952. Rounding out the volume are several stories from more modern interpretations of the character. It closes with a full length team-up with Batman from 2007 by Jeph Loeb and Darwyn Cooke.

Unlike Superman, Batman, or Captain America, The Spirit was never a newsstand comic book. During the Golden Age of comics, The Spirit was only available as a 16-page insert inside the Sunday Comic Section of at most 20 newspapers across America.

In 1939, Eisner, already a veteran of the comic industry at age 22, was asked by a syndicate to create a comic book that newspapers could use to compete with the rapidly growing influence of regular comic books.

Which is ironic as comic books themselves had their roots in being collections of reprints of newspaper comic strips.

The artist was then running a studio with his partner Jerry Iger which supplied original comic material to publishers such as Fox Comics and Fiction House. He knew the format inside out and found the material he was generating limiting.

Looking for a way to explore more adult ideas as well as free himself from the editorial guidelines being made by clients who only saw the bottom line, he left his company. With a deal in place that he would ultimately own his material and creations, Eisner moved into the newspaper business.

The idea of the Spirit is set from the very first adventure. Looking to avoid placing the character in the realm of normal superheroes, Eisner didn’t even give him a mask in the first appearance. He also put the hero inside the very real world of New York City.

As an artist Eisner mixed unusual angles and perspective with expressionistic light, bright colors and wild shadows to create a style that influenced any artist of note that followed. Read one story in this collection and you will understand immediately why the comic industry’s greatest award is named “The Eisner.”

Over the next twelve years he built a vision of NYC as a place of angled light, bridges, cemeteries, subways, heat, snow and alleys. The violence can be extreme, but is almost always played out for laughs, a nod to the idea that comic violence is exaggerated and unreal to begin with.

He never stopped experimenting within the medium. On the splash page (the “splash page” is first page of the story), he would hide the name of the Spirit in an ad on the subway, or as part of the pages of a calendar, the steps on a staircase or turn it into bricks and fitting it into the buildings of a city street.

A story could be framed inside the conventions of a children’s book complete with what looks like German woodcuts (“The Story of Rat-Tat, the Toy Machine Gun,” September 14, 1949). Or it could open with pages of a different magazines sitting side-by-side as they tell the story of two different, but identical men (“Two Lives,” December 12, 1948).

He filled that world with people who made both good and bad decisions. Many of the stories are filled with con men, crazies, embezzlers, shoeshines, murderers, obsessives, liars, cheats, honest men, unintentional victims and criminals.

The women in his stories could be stone-cold killers who murdered without batting an eyelash. Or they could be love-struck dames who couldn’t come to terms with reality.

It didn’t matter, for the women in his stories were beautiful. When it came to portraying women in the most flattering light possible Eisner was every bit the equal of Milton Caniff or Mac Raboy. Characters such as Silk Satin and P’Gell are the perfect examples of the femme fatale. Both are as legendary for their looks as they are for their evil nature.

Which leads to the sexism and racism that is an occasional part of some of the stories. While definitely “of-the-time,” there are images and characterizations of both women and African Americans which will offend some.

Eisner had help with the Spirit stories. Especially after being drafted in late 1941. He was used to working in a studio environment and employed assistants. Many of whom had notable careers of their own. This includes artists and writers such as such as Tex Blaisdell, Bob Powell, Lou Fine, Wally Wood, Jules Feiffer, and Jack Cole.

The influence of Eisner’s work on The Spirit is vast. Check out Harvey Kurtzman’s work on the early issues of MAD for proof. At the opening of the first Batman movie directed by Tim Burton, the camera travels what looks to be the cement walls, alleys and underground of a city. That’s the cinematic equivalent of a Spirit splash page.

With an introductions by Neil Gaiman and Darwyn Cooke, these are brilliant stories with unmatchable art. This is the best that comics can be.