Spies, Scouts, and Secrets in the Gettysburg Campaign: How the Critical Role of Intelligence Impacted the Outcome of Lee's Invasion of the North 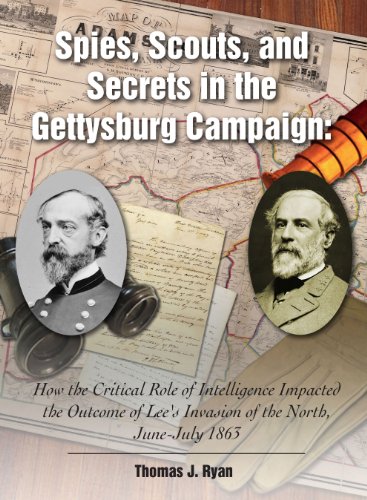 The Gettysburg Campaign is one of the most studied events in American history and authoring a new or groundbreaking book on this topic is a significant challenge.

Thomas J. Ryan has risen to this challenge very successfully and written a truly original study on the role that the collection, analysis, and dissemination of military intelligence had on the strategic and tactical decisions of both army commanders from the end of the Chancellorsville Campaign to the final retreat of Lee's army from the North.

It is hard to imagine in this era of Google Earth and cable news, but in the 18th and 19th century armies of thousands of men could pass within a few miles of each other and never detect their opponent. Therefore, the basic intelligence challenges for generals in the Civil War were fairly straightforward: Where was the enemy army? What was their order-of-battle? And most importantly, what were their plans and intentions?

These were seemingly simple and straightforward questions, but as Clausewitz wrote “Everything is very simple in war, but the simplest thing is difficult.” This was certainly true of Civil War intelligence.

Ryan lays out the book in almost a case study format, beginning with the basic intelligence organization and process for both armies. Both armies used cavalry, scouts, signalers using flags, civilians in the path of both armies, and various other sources for information. One of the interesting themes of the book is that, given the resources available, both armies used fairly sophisticated sources and methods to conduct their intelligence analysis.  In addition to the sources listed above, both sides made good use of enemy newspapers, enemy deserter and prisoner interrogations, and for the Union forces, the accounts of escaped and runaway slaves.

One critical difference that Ryan describes in some detail between how the Union and Confederate armies handled their intelligence needs was the Union army's dedicated intelligence staff, begun in early 1863.

The Army of the Potomac's Bureau of Military Information (BMI) was headed by Colonel George Sharpe and provided a dedicated group of scouts, interrogators and analysts to handle the collection and analysis functions and provide finished intelligence to both General George Meade and his predecessor General Joe Hooker throughout the campaign.

Ryan uses a variety of sources to show that Sharpe's analysis of Lee's order-of-battle was remarkably accurate, a testament to his analytic rigor when army commanders, especially Union commanders, often inflated their estimate of an opponent's army strength by 25–30 percent or more, creating an inaccurate impression that they were badly outnumbered and inducing an overly cautious approach to battle.

General Robert E. Lee had no equivalent staff and was almost totally dependent on General Jeb Stuart's cavalry for information on the Union army, a critical limitation when Stuart took his cavalry on an extended raid into Maryland and Pennsylvania leading up to the battle, denying the Confederate army of a critical intelligence capability for the first two days of the battle.

Once the battle began, scouting for the opposing army's flanks and weak spots and conducting terrain analysis for roads, trails and other geographical features that could be used by the army for tactical advantage became critical intelligence functions.

Ryan examines these activities in detail, focusing on the critical lack of information and flawed assumptions made by both Generals Lee and Longstreet before launching the Confederate attacks of July 2 and July 3.

This lack of what modern armies term surveillance and reconnaissance caused Lee to launch his afternoon attack on July 2 against the much larger force of General Daniel Sickles Union III Corps along the Emmitsburg Road instead of the two or three regiments that scouts initially estimated to be in position. Lee's attack still nearly succeeded and only the late start in the day prevented what could have been a much worse tactical day for the Union army.

Ryan sees the campaign through to its end as Meade tries to pursue and destroy Lee's army during its long retreat back to Virginia after the failure of Pickett's Charge on July 3. Cavalry and scouts again played a major role in trying to locate the battered Confederates and determine their routes back to Williamsport, Maryland, where Lee finally crosses into Virginia, ending the campaign and the so-called “High Watermark of the Confederacy.”

Finally Ryan offers some interesting insights on the state of intelligence during the Civil War and some of the triumphs and failures each side experienced as they used a battle of wits and information to try and gain an advantage over their opponent.

Ryan has done an excellent job of creating a unique book on the Civil War, well illustrated and with plenty of maps to follow the narration. This volume tells an almost unknown side of this well chronicled battle-how the use of intelligence by both sides affected one of the most decisive battles in American history.