Spies of No Country: Secret Lives at the Birth of Israel 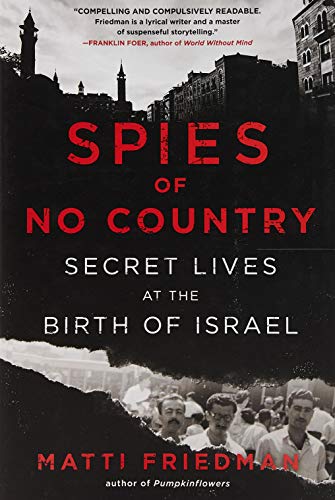 “Friedman’s account of the Arab Section is an eye-opening narrative of the early days of the State of Israel. It is not an optimistic story, but a genuine and sorrowful one.”

Imagine what it would be like to have been a spy for George Washington during the Revolutionary War. The Patriots had spies who were able to disguise their intentions because they were indistinguishable from Loyalist colonials. Every combatant nation—from ancient Egypt, Rome and Greece—used espionage to acquire intelligence. The Central Intelligence Agency continues that military tradition today matched by similar spy agencies among the nation’s opponents.

Matti Friedman, a former Associated Press reporter in the Middle East, has constructed a noteworthy and authentic spy story. Spies of No Country tells the story of the birth of the State of Israel in 1948 through the accounts of a small group of Jewish heroes, the Arab Section, who spied for the new state in surrounding Arab countries. Their perilous effort proved successful only because these men had been born in Syria. They looked like Arabs, spoke Arabic like natives, and operated like residents of Lebanon, Syria, and Jordan.

Members of Palmach, the vanguard of the Jewish army even before David Ben Gurion announced on May 14, 1948 the creation of the state, these courageous and self-reliant soldiers began their espionage operations before there was a State of Israel that arose after the British abandoned Palestine.

Early in the Second World War, the British had trained their Jewish adversaries in the event the Nazis attacked the Middle East. Their skills would prove vital. For the most part, however, the Arab Section was disorganized and, at times, crippled by internal discord.

Friedman interviewed the few elderly men who remain alive about their exploits from 70 years ago. They were not boastful, but humble and realistic. He also had access to the Palmach archives which included pictures of the men of the Arab Section that fill Friedman’s book. The primitive technology available to the Israeli spies made their activities treacherous. The absence of military control over the Section also made chaos a way of life.

Friedman’s book is filled with riveting vignettes. There are many available histories of the entire 1948 War. This is rather a splendid retelling of one small part of the effort to create a Jewish homeland. That effort continues.

Originally charged with simply collecting public information from Arab newspapers, the spies turned to sabotage once the new State of Israel was attacked by the armies of five Arab countries. Every victory was critical to the young nation. The stability of Israel was tenuous. During the war, one out of every one hundred Israelis died in the struggle.

The men of Palmach were, for the most part, secular Jews. They were not fighting for God, but for a small piece of land. Those in the Arab Section saw Israelis as not that different from the large Jewish sections of Aleppo and Damascus, Syria, where many were born and raised. They had no hatred for the Arabs who were their neighbors.

By comparison, Friedman relates the vitriolic and racist propaganda of Arab leaders. They wanted to drive the Jews into the Mediterranean. Their actions were clothed in religious fanaticism. Although an armistice ended the War for Independence in 1949, the Arab states, for the most part, never ceased their hostility. Perhaps it was inevitable that the Israelis would respond to Arab aggression with occupation.

Friedman’s account of the Arab Section is an eye-opening narrative of the early days of the State of Israel. It is not an optimistic story, but a genuine and sorrowful one.