The Spice Companion: A Guide to the World of Spices 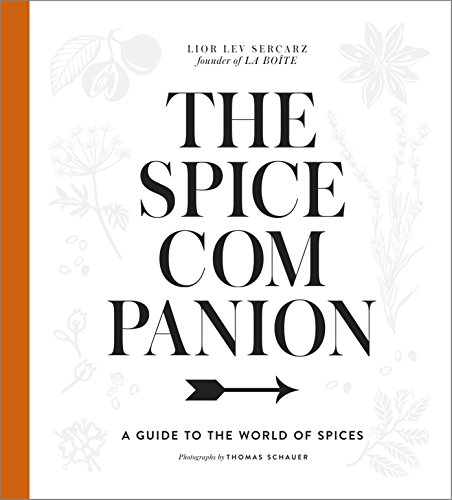 A few years back the Times ran an article about Lior Lev Sercarz, a professional chef who hails originally from Israel and has honed his professional skills in the kitchens most notably of Michelin-starred chefs Olivier Roellinger in Brittany, France and Daniel Boulud in New York. What was striking about his story, though, was that Mr. Lev Sercarz veered off the usual professional chef path and drilled down into the world of spices, eventually making a name for himself among professional chefs as a kind of spice magician.

It was his proprietary blend of spices that caught on and after much study and years of experimentation, Lev Sercarz eventually opened La Boîte, a storefront in New York’s Hell’s Kitchen, in 2006 to sell his spice blends to the rest of us. He sells 41 unique blends with names like Reims, Cancale, or Sri Lanka that give you a culinary hint before you even look at the ingredients. He also sells a smattering of individual spices (all of which can be purchased online).

Walk into his store and he has each of the blends that are numbered one to 41 lined up on a rack for you to smell. One whiff of any of them and it will transport you to another place. Which is exactly his aim. This is the part that stood out in that Times article: Lev Sercarz thinks of himself as a kind of spice therapist. He sometimes makes a custom blend for individual clients based on an initial interview. The result is that the spices, when used by the client in cooking, will bring up long forgotten memories of childhood or some other period in your life. Smell apparently works through our primitive brain function.

Now with The Spice Companion, he is encouraging us to blend our own custom spices, or at least be open to trying new combinations and upping our spice game in the kitchen. There is an introductory lesson on how to blend spices as well as a separate chapter on proper storing.

It’s all about broadening our familiarity with spices and playing with flavor combinations. Lev Sercarz has a missionary zeal towards the world of spices and his passion is positively infectious.

This beautiful A–Z encyclopedia is a carefully curated selection of 102 spices. There are full-color photos of both botanical renderings as well as artfully photographed images of both whole and ground examples of each spice. He also includes notes on traditional uses for each spice along with suggested spice pairings as well as recipe ideas. Finally he ends each two-page entry with a suggested spice blend for you to try on your own.

While the book is an absolute joy to peruse, it isn’t as user-friendly to the average home cook as it might have been. It would have been nice to include one complete recipe for each spice instead of just ideas. It was frustrating to see gorgeous full-page color photos of finished dishes that are randomly scattered throughout the book that are vaguely recognizable from some of his recipe ideas, but with no accompanying recipes or even captions to accurately identify them.

That said, it will spur you to get in the kitchen and start fiddling. My own attempts met with varying degrees of success. For a pork stroganoff with a mustard sauce that included dried mustard I turned to the entry for Mustard and found the following suggestions for spice pairings: allspice, bay leaves, caraway, cumin, and ginger. I added some caraway and a sparing amount of cumin and thought it added another layer of complexity to the dish.

My next two forays were less successful. I had a small jar of recently purchased ground ancho chile and decided to use it in chocolate mousse as was suggested in one of the recommended food pairings. Here’s where you can get into trouble. I wasn’t sure whether he meant to mix it in with the batter or sprinkle it on top. It’s a relatively mild chile so I used one full teaspoon and then tasted the batter. Not much of a difference in taste, but it definitely changed the texture and not for the better. I passed it off as normal chocolate mousse and was told by my family it tasted gritty. I agree.

Finally, I made some roasted potatoes and tried the recipe idea under Ginger for a combination of two parts ground ginger and one part sweet paprika to season the potatoes. He doesn’t say whether to season before or after roasting so I sprinkled it on before. The ginger burned in a hot oven. Still, it was an interesting flavor profile that is worth trying again as a seasoning after the potatoes have been roasted.

All-in-all The Spice Companion makes a wonderful addition to any serious cook’s library, just be prepared to make some mistakes along the way—which, if you are a serious cook, you are already used to doing. This is one for your Christmas wish list.