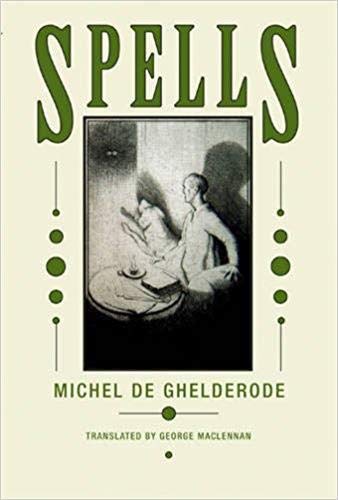 "Spells by Michel de Ghelderode offers a collection of stories both beautiful and loathsome. He represents literature that must be wrestled with to fully appreciate. . . . [it] is literature distilled from despair, nostalgia, and sickness.”

Paranoia and religious mysticism mingle in hallucinatory tales of the grotesque. Spells, by Michel de Ghelderode (Adhémar Adolphe Martens, 1898–1962) was written in 1941. The stories inhabit, according to the back cover, “a twilit, oppressed world of diseased gardens, dusty wax mannequins, sinister relics, and an all-consuming fog.” This current Wakefield Press edition combines stories from the 1941 and 1947 editions. The importance of this editorial decision will become apparent as Mr. de Ghelderode’s gnarled biography will attest.

Michel de Ghelderode made his career in Belgium as a dramatist, but after 1936 his health began to suffer. This gangrenous “siege of the room” produced Spells. To complicate this picture, Nazi Germany occupied Belgium at the time. As translator George MacLennan explains in his introduction, “In 1940, he [de Ghelderode] had expressed pro-German sentiments in letters to friends; even more damagingly, he had, in the early 1940s, given a series of broadcasts on Nazi-controlled Radio-Bruxelles.” Unlike other troublesome luminaries of literary modernism, specifically Ezra Pound and Louis-Ferdinand Céline, de Ghelderode wasn’t actively partisan in his writings.

These pro-German sentiments cast a dark shadow over a story like “Eliah the Painter,” a work described by Mr. MacLennan as “one of the blackest anti-Semitic fictions in twentieth century literature. Unsurprisingly, it disappeared from the 1947 edition.” Wakefield Press re-introduced “Eliah the Painter” in their edition of Spells. Because of the controversial and toxic nature of the story, it receives its own introductory note. So why include it if it is anti-Semitic? Karl Max famously said religion was the opiate of the people. Does literature serve the same purpose? (Wakefield Press has a catalog meant to disrupt, discomfort, and disorient those looking for the book equivalent of “Netflix and chill.” Being “woke” doesn’t mean isolating oneself in a comfortable little bubble, unchallenged by dangerous ideas and humanity’s infinite capacity for evil.)

Appreciating Spells and Michel de Ghelderode involves two specific mindsets. The first is to not have his biographical information and notoriety cloud an otherwise objective assessment. The notoriety of “Eliah the Painter” and the radio broadcasts would make it easy to jump to any number of conclusions. The second mindset to have involves not sequestering Literature in a hermetic seal of its own specialness. Art is never created in a vacuum. Appreciating art also shouldn’t be done in a vacuum, even if the art in question involves unpleasant thoughts and murderous political ideologies.

The political and personal shade Spells, making it a dark, paranoid, and sickened collection of short stories. Disease and decay resound throughout the work, reflective of de Ghelderode’s own personal battle with illness. Sickness and rot have also become the metaphors by which conservative revolutionary movements like fascism describe a culture in need of cleansing and moral revival. Even before the Nazi takeover of Belgium, the nation possessed their own homegrown fascist party, the Rexists. In order to fully appreciate Spells, an understanding needs to exist. Michel de Ghelderode, one of Belgium’s most gifted writers, held loathsome views about the Jews and saw the Nazis as liberators.

The stories, beyond the notorious “Eliah the Painter,” include tales of diseased gardens, haunted dolls and automatons, and crumbling mansions. Like a Belgian Edgar Allan Poe, de Ghelderode is master of the short story. “The Sick Garden” hearkens to both Decadent and Gothic literature in its plot of an eccentric renting the ground floor of a dilapidated mansion. The narrator, an idiosyncratic aesthete, tells of “The ivy, the wisteria, the Virginia creeper are octopuses in combat, suffocating the shrubs and pushing up the walls.” The garden makes him uneasy. He becomes convinced the garden contains a mystery.

“You Were Hanged” involves a traveler coming to a provincial Flanders village and a small inn called The Little Gibbet. While the traveler tries to find the legendary gallows, he has to deal with a coarse innkeeper named Jef.

“While waiting, I learned from the innkeeper that he was a vehement advocate of the death penalty and regretted the passing of an era that was less sensitive but also less hypocritically humanitarian, when people of no account were publicly executed and sometimes people of high degree too. His harangue continued with an attack on democracy, which depersonalized the individual, and against compulsory education, which resulted in stupidity and encouraged vanity and despair for the good old manual crafts. Then he railed against the utopia of Progress, and from that I could see that his speech was heading straight towards an apocalyptic description of the end of the world according [to] the prediction of a Minorite father he knew.”

Jef’s tirade should be familiar with the American alt-right and their coarse loudmouth paladins of revolutionary virtue. Yet de Ghelderode’s tacit endorsement of Jef’s authoritarianism also comes with seeing the innkeeper as a figure of ridicule. His disgust for the modern world also comes with disgust for the mass movements that sought to change it. Many of the stories in Spells reside in this ambiguity. Sometimes the best authors are those hardest to peg down.

Spells by Michel de Ghelderode offers a collection of stories both beautiful and loathsome. He represents literature that must be wrestled with to fully appreciate. The stories, veiled in a cloudy nostalgia, reflect de Ghelderode’s struggle with illness and what he saw as the illness of modern civilization. Despite holding many views that do not jibe with modern sensibilities, he was a writer of vast gifts, witness to a world crumbling around him. Spells is literature distilled from despair, nostalgia, and sickness.