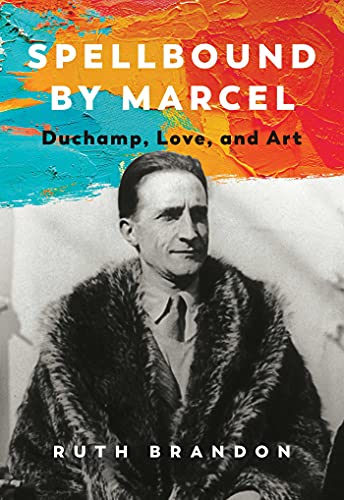 Two of the most famous 20th century artistic salons were the Bloomsbury Group in London, a literary community centered on Virginia Woolf, and Gertrude and Leo Stein’s salon, which brought together notable painters and writers living and working in Paris after the turn of the century.

A third, lesser known salon was established in New York during World War I by Walter and Louise Arensberg, wealthy textile heirs from New England. Their salon, short lived, included a mix of visual artists, writers, and various bohemian hangers-on. This group of aesthetes orbited around the modernist French artist Marcel Duchamp, who, as Ruth Brandon tells it, exerted a magnetic pull over the men and women he encountered, and whose highly original work provoked controversy in the art world.

Drawing on the stories of the Arensbergs and three principal figures in their salon—Duchamp, Beatrice Wood, and Henri-Pierre Roché—Brandon has woven a narrative that intermingles complex romantic entanglements with persistent artistic aspirations, giving readers a book that is one part 20th century cultural history, two parts gossipy soap opera.

Duchamp, the principal character, came to New York in 1913 to escape the war and to exhibit his cubist masterpiece Nude Descending a Staircase at the famed Armory Show. The Arensbergs had also come to New York for the show and were inspired by it to become art collectors. They provided a studio space in their upper west side apartment building for Duchamp and opened their lavish apartment to gatherings of the city’s avant-garde. Duchamp, admired for his charm, wit, and iconoclasm, was the drawing card.

A rover who liked to live aimlessly and surrender to chance, Duchamp resisted romantic attachments (in Paris he had been rebuffed in his arduous pursuit of Francis Picabia’s wife Gaby), but carried on numerous liaisons, sometimes sharing his partner with friends in three and four ways. His mixture of charm and indifference somehow made him irresistible to women.

One such conquest was Beatrice Wood, a well-to-do socialite and would-be actress whose family frowned on her bohemian inclinations. She met Duchamp by chance in the hospital room of the French composer Edgard Varèse and quickly became friends. Duchamp brought her into the Arensbergs’ salon and tried to pair her with the writer and journalist Henri-Pierre Roché, another transplant from Paris who was employed by the French High Commission to aid in their war propaganda effort. Roché, a compulsive womanizer whose heart was anchored to his perennial French lover Germaine Bonnard, gallantly took up the quest for Beatrice’s virginity, which she guarded doggedly in deference to her controlling mother. And anyway, the man she loved was Duchamp, who scrupulously distinguished between women he genuinely liked and women he enjoyed having sex with.

The story of this triangle, and its many side paths leading to other characters and their sexual adventures, occupies the bulk of the book. Beatrice’s story dominates, as she struggles to find her artistic path and break free of her mother’s influence. She makes a disastrous marriage to a man she does not love who impoverishes them through indebtedness and is revealed as a compulsive gambler and bigamist. Disgusted with her irresponsible choices, her father disinherits her. She becomes a follower of Krishnamurti, moves to California, enters a second loveless marriage, but by a kind stroke of fate, finds herself as a ceramicist and achieves financial independence through her work. She lives to be 105 years old.

Roché’s habit of compulsive pursuit wreaks havoc on Beatrice and the Arensbergs. Professing love for Beatrice and managing to make love with her without vaginal intercourse, leaving her virginity technically intact (Brandon mines her subjects’ diaries to bring us these salacious details), Roché beds her confidant Alissa Franc and also seduces Beatrice’s best friend Louise Arensberg, jeopardizing the Arensbergs’ marriage. The Arensbergs pull up stakes and move to California, bringing an end to their salon. Roché, late in life achieves fame as the author of Jules et Jim, which became the source for one of the greatest films of the French nouvelle vague.

Duchamp continues his restless, aimless, indifferent way of life. His artistic productivity goes into decline following the rejection of his readymade sculpture titled The Fountain, a urinal he purchased from a plumbing wholesaler and signed “R. Mutt 1917,” then entered in the Society of Independent Artists exhibit, which he had helped organize. Duchamp relished this poke in the eye of pretentious art lovers, who excluded the piece without realizing that Duchamp was its creator. No one had heard of R. Mutt.

For years, after the demise of the Arensbergs’ salon, Duchamp moved restlessly between New York and Paris, living marginally on sales of his readymades. He sought solvency through a marriage to an unattractive, inexperienced young woman whose modest dowry disappointed him and shortened the marriage to six months. He befriended the painter and photographer Man Ray during a sojourn in New York, and also fell in love for the second time, again with a married woman. This passion rekindled his artistic fire, inspiring Étant Données, a mixed media, three-dimensional diorama with pornographic overtones.

In 1954 he married Alexina Matisse, the former wife of Pierre Matisse, and remained with her the rest of his life. Her divorce settlement with Pierre brought her a number of major 20th century art works that secured them financially.

The 1960s art world in New York rediscovered Duchamp, finding in his mischievous and provocative work a sensibility suited to the times of Andy Warhol and Roy Lichtenstein, with their mockery of pretension. He died in 1968 at the age of eighty, shrouded in the fame he had shunned in preference for privacy and anonymity. Some art historians now consider him to have been the 20th century’s most influential artist.

What do we learn from Ruth Brandon’s probing account of these artists, connected by their presence in the Arensbergs’ salon? Her attitude toward them might be described as sardonic, stressing as it does the casual, transient nature of their relationships, their carelessness with each other, the selfishness of their motivations. These characteristics of their personal lives overshadow her interest in their artistic output and accomplishments.

Perhaps the key is Duchamp’s pose of indifference in both his personal life and his art, an indifference that cast a spell on those who drifted into his path, but left broken hearts in its wake.