The Speed of Falling Objects 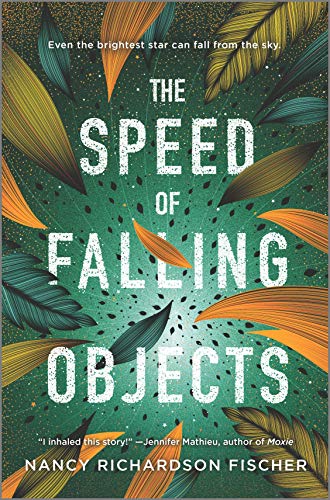 “Nancy Richardson Fischer has produced a joyous and highly satisfying read, and one that deserves acclaim and award. . . . a novel that oozes excellence and craftsmanship.”

This intensely thrilling and highly readable novel fizzes with energy from start to finish. The narrator is Danny, and her voice is clear throughout. She is close to celebrating her 17th birthday and is doing well at school. Despite losing one of her eyes after a childhood accident, her disability hasn’t stopped her from doing everyday teenager activities. Her mother, a nurse, is sensitive and protective of Danny since her father left them. She has imparted many medical skills onto her daughter who has ambitions to become a doctor.

Danny’s father, named Cougar, is a completely different character. Absent throughout his daughter’s childhood (since her accident) and bordering on a narcissistic personality, he makes contact with Danny just before her birthday. He’s rich, macho, and arrogant. He feels superior to everybody, thanks to presenting a high rating adventure program on TV alongside many famous celebrities, which has allowed him to travel the world doing daredevil survival tasks. He invites Danny to the filming of his next show in the Amazon rainforest as a birthday gift and she jumps at the chance. She thinnks this would be an ideal opportunity to get to know him better, and besides, Gus Price, a young, drop dead gorgeous teen movie idol has signed up as a participant in Cougar’s latest adventure.

Danny thinks she is going on a birthday trip—an adventure—but she is wrong to assume the trip will have a happy ending. Nothing can prepare her for what happens. It all sounds perfect but unfortunately what can go wrong does go very wrong. The plane takes off from Los Angeles airport, and crashes a few hours into the flight to Peru owing to inclement weather. The plane, with seven people on board, splits in two. One person is killed instantly and over the course of the next couple of days two more die of their injuries. That leaves Danny, Cougar, Gus, and a sound technician called Jupiter in the rainforest, praying they will get out alive.

Finding herself in the middle of the rainforest is a terrifying experience for Danny. Every type of creepy crawly, wild animal, and mammal on land and in swamps, along with poisonous snakes and frogs, inhabit every inch of the place. The weather is either torturously hot or raining heavily for an entire day or night.

Danny discovers little comfort in the rainforest where even clean water is rare, but the medical knowledge she has acquired from her mother proves useful.

Cougar is in his element showing off his various skills and boasting of his experiences and knowledge. The fact that crew members either died or were dying is cavalierly brushed aside as collateral damage. Despite these difficult circumstances Danny still craves her father’s attention, recognition, and love. She is also busy trying to gain Gus’s attention and vice versa because despite a rocky start, their sweaty bodies, bad breath, and a diet of bugs, grilled snake, and wild passion fruit, romance slowly develops.

As the days go by, the survivors are anxious to find a river that will lead them to safety and help. Just as hopes are fading, they find a river, but in the hurry to build rafts and get sailing, the swift tide causes Jupiter to be washed downstream and get badly injured.

The manly Cougar goes to his rescue but also gets injured—along with a bruised ego. This leaves Danny and Gus to go in search of help on rafts they build. Exhaustion and poor progress results in them resting overnight on the riverbank. But instead of sleep, a night of love-making ensues. By daybreak, renewed energy and vigor lead to them quickly setting sail again before eventually, to their immense delight, they hear the sound of a motorboat in the distance.

Nancy Richardson Fischer has produced a joyous and highly satisfying read, and one that deserves acclaim and award. It wouldn’t be a surprise, based on the high quality of her previous work, if The Speed of Falling Objects takes her to an even higher public platform. Indeed, this novel has the potential to be turned into a movie.

Richardson Fischer’s research and attention to detail is most admirable, and her ability to write credible dialogue and describe situations and people is simply incredible. The novel almost has a hypnotic feel. The storyline flows with ease, effortlessly gliding from chapter to chapter, and is never labored or repetitive. It’s never an easy task to write for young adults, but Richardson Fischer seems to have mastered the technique of tapping into young peoples’ imaginations. Overall, her research, writing ability and her creativity have produced a novel that oozes excellence and craftsmanship.