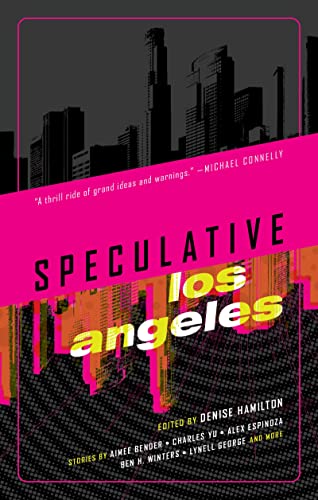 “Accessible, challenging, and fun by turns, Speculative Los Angeles possesses everything a fan could want.”

Homemade mecha fighting in junkyards, fairies stealing children from ICE detention centers, and guerrillas fighting an America First dictatorship—all these and more are contained within the covers of Speculative Los Angeles, edited by Denise Hamilton. This represents the debut title for a new series of city-based speculative fiction from Akashic Books. Los Angeles is also an ideal location to start such a series, since it is, in the words of editor Denise Hamilton, “already so weird, surreal, irrational, and mythic that any fiction emerging from this place should be considered speculative.”

Like any megalopolis, many writers have called it home. Hamilton lists such names as “Nathanael West, Harlan Ellison, Octavia Butler, Philip K. Dick, and Aldous Huxley.” Hamilton also excels in distilling what makes the city of angels such a draw and a target for resentment. “In addition to plagues, reality for us also means giant forest fires that poison our air and block the sun; powerful earthquakes; extreme droughts; rising seas; Orwellian surveillance; exploding tent cities of the dispossessed; and Hollywood’s dream factory, where the blight of celebrity worship began.”

These collected stories reflect the present with images of the future. Present-day dreams and nightmares amplified or tweaked. Speculative Los Angeles, Hamilton says, had some authors “writing before the coronavirus descended and Black Lives Matters protests surged following the police murder of George Floyd, were eerily prescient in capturing elements of what lay ahead.” Had the events of the Capitol attack gone differently, a few of these stories could have been relabeled nonfiction.

Not all stories here involve technocratic dystopias. On a brighter, weirder note L.A. native Jack Parsons makes an appearance in a couple stories. Parsons became infamous for being both a rocket scientist and occultist. In Lisa Morton’s alternate history tale, “Antonia and the Stranger Who Came to Rancho Los Feliz,” the titular Lisa meets Parsons when he stumbles onto their ranch. Taking place in the nation of Alta California, Los Angeles exists only as an agrarian outpost. Its history separate from both the United States and Mexico, the story has Lisa running a farm staffed by Native American, Asian, and Mexican people. This multicultural idyll is interrupted when Parsons reveals the true nature of his visit.

“Purple Panic” by Francesca Lia Block takes place in seventies-era Studio City. “[A]n apocalyptic place in its own suburban way,” Block writes, “I think it damaged all of us.” She infuses the story with local color and characterization rich in detail and realism. The title comes from the bloom from the jacaranda trees. It clogged bronchial tubes, but “Another theory about purple panic had something to do with paganism—panic as in Pan the nature god with his cloven hooves.” The narrator speaks of her friend, Tamara, whose house “smelled of chlorine from the swimming pool, rotten lettuce, pee, and sweat; and her little brothers and sisters with their tangled hair ran around shirtless, the shadows of their ribs showing bruise-like through their skin.” Block’s story takes a dark turn when it is revealed Tamara is being abused by her father. The way she fights back brings in the supernatural element. Any more details would spoil the story’s slow burn finale.

Speculative Los Angeles has a lot to offer. Like the city itself, it is sprawling, multifaceted, and multicultural. The diversity of stories reflects the diversity of the authors. Neither feels forced or artificial (a common insult against Los Angeles). Horror, science fiction, fantasy, alternate history, and supernatural thrillers all get their due representation here. Accessible, challenging, and fun by turns, Speculative Los Angeles possesses everything a fan could want.