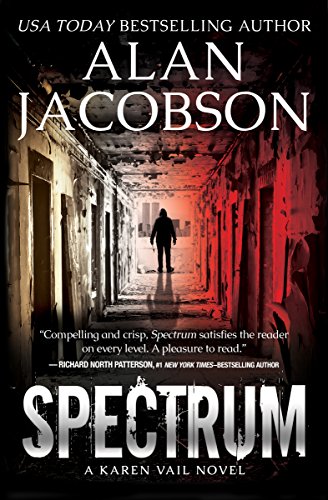 “Just when you think you have it all figured out, Jacobson throws up a dead end sign and you have to back out of what you thought was the right path to turn down. That’s good writing.”

Alan Jacobson is the national bestselling author of highly regarded thrillers that have sold internationally. His Karen Vail series has been optioned for television.

For those readers who have yet to read any of Alan Jacobson’s books in the Karen Vail series, Spectrum is number six, yet it would be an excellent novel to begin with. This action packed tale describes Vail’s first days as a New York City cop, and later, her transition from the police department to the FBI.

This thoughtful drama takes place during two time periods, the 1970s, where it follows a Greek immigrant family and their travails trying to adjust to living in the United States, and the 1990s, when Karen Vail launches her law enforcement career. Eventually, the parallel stories merge into the present day.

The author, well known for his thorough research before writing his novels, continues his practice in Spectrum. He takes the reader on a journey of NYC and its iconic tourist attractions, restaurants, and landmarks. The locations, cop dialogue, and tactics are spot on, due to the relationships Jacobson has forged over the years with various law enforcement and medical professionals.

The story’s protagonist, Karen Vail, encounters a serial murderer in the book’s first few pages. Little does she know that this case, later code named Hades, will follow her throughout her dynamic career. The elusive killer leaves his signature on each victim, yet the paucity of any other clues, as well as the randomness of the murders, baffles Karen and her colleagues for 20 years.

Yet this particular demon isn’t the only case Vail tackles. We are there as she confronts bank robbers and other felons on her way to leaving the NYPD and joining the FBI, a move she hopes will allow her to become a profiler. That lofty goal, however, to become a part of the most respected behavioral profiling unit in the world, is not without bumps along the way. Personal and professional roadblocks seem to constantly stand in her way.

Readers will enjoy learning that Vail isn’t the perfect cop or agent. Her personal life is often times in tatters, and professionally speaking, she doesn’t always make the right decisions. These flaws actually make her character more credible and endear her to the reader.

Spectrum has more twists and turns than a corn maze. Just when you think you have it all figured out, Jacobson throws up a dead end sign and you have to back out of what you thought was the right path to turn down. That’s good writing. Kudos to the author for his focus on even the little things while describing how the police and feds operate. He has truly done his homework.