The Spectre of Race: How Discrimination Haunts Western Democracy 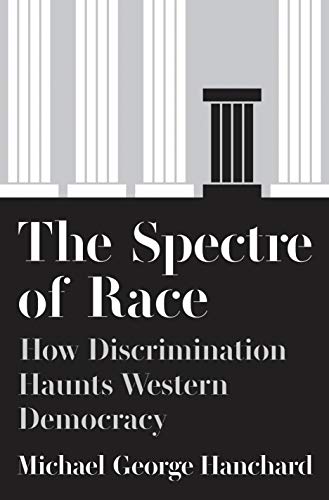 Was classical Athens a democracy? If not, do some of its undemocratic ways continue to shape so-called democracies in the 21st century? Hanchard  tackles these questions head on and believes that his answers help explain nativist populism in today’s Europe and United States.

Hanchard is a professor in the Department of Africana Studies at the University of Pennsylvania. His story is anchored in ancient Athens, where a majority of residents could not vote. Before the fifth century Greco-Persian wars, foreign residents (metics) and women could not vote but were allowed to participate in formal public rituals.

After the fifth century wars with Persia, autochtony became a requirement for citizenship. Based on a myth, autochtony held that citizens could only be male descendants of original Athenian males who literally sprang from the earth. (Some Native Americans still believe that their ancestors came out of the earth—not from Siberia.) Civic rights for metics and Athenian women were tightened after the Persian wars, but slaves had none. Slavery, its proponents argued, made democracy possible. Citizenship was a gendered ethno-national regime.

Autochtony, designed to limit membership in the Athenian polity, became a prototype for limiting citizenship in modern Western polities. In ancient Athens, as in modern political communities, groups of people were excluded from political participation through law, normative reprobation, and coercion. Democracy coexisted and now coexists with anti-democracy. The ability to own property and to access wealth, education, and suffrage have their origin in laws and customs that have privileged males in most societies. Social and economic inequality have origins in political inequality.

The concept of race became the modern equivalent of the Athenian myth of autocthony in many Western states. But the race concept was “portable”—it grew detached from territory to denote populations regardless of their location. Populations showed their alleged racial characteristics wherever they appeared. Allegedly superior races such as the Teutonic were said to be predestined to rule whether in Germany or Africa. As Hannah Arendt noted, this kind of racism cuts across national boundaries. Western governments have devised racial and ethno-national regimes that used immigration controls, literacy, birth, and wealth to limit access to political life.

The 19th century study of comparative politics marshaled evidence that racial and national hierarchy is central to modern politics. Thus, Oxford historian Edward Augustus Freeman in 1873 argued that the idea of race has been central to politics from the ancient polis to the more recent conjuncture of nation and state.  Similar views were evident in the scholarship and political recommendations of Princeton professor Woodrow Wilson. Non-Teutonic peoples were judged to be inferior and less able to form a successful polity. Given Wilson’s evident racism, people now debate whether to strip his name from institutions in Washington and New Jersey.

Hanchard’s book offers a critique of the discipline of comparative politics, particularly its devotion to quantitative methods, and relative neglect of anthropological studies of particular  cultures. He also criticizes what he sees as the discipline’s failure to confront head-on the role of racism in polities around the world.

“Neither colonialism nor neocolonialism by the world’s major powers has received much attention by scholars of historico-institutionalism in comparative politics. Is it mere coincidence that the most enduring democracies . . . are the polities that have benefited the most from the transatlantic slave trade? Did slavery, specifically racial slavery, provide the necessary material largesse to make democracy possible?”

The Spectre of Race contains information relevant to every alert citizen, such as Americans debating whether stronger measures are needed to counter voter fraud and whether police should wear body cameras to document their interactions with suspected criminals. As Hanchard writes: “Our contemporary moment is that population homogeneity, like the category of foreigner and citizen, is a political artifact.”

As in ancient Athens, today’s nationalistic and xenophobic movements emphasize origins along with skin color, religion,  and other traits to distinguish citizen from non-citizen. To achieve homogeneity, some officials and publics would resort to exclusion or removal of outsiders, as happens in today’s Myanmar. A postscript entitled “From Athens to Charlottesville” carries the story into the populist identity politics of the Trump era.

However, this book is written for social science professionals and should pressure them to think again about their approaches to comparative politics and democracy. The last chapter on restructuring comparative politics evaluates the writings of many anthropologists, sociologists, and political scientists such as Samuel Huntington. The book’s appendices provide a virtual encyclopedia of information on political prohibitions on people of African descent in Latin America and the Caribbean, 1805–1900; details of the discriminatory laws; and more recent affirmative action legislation in Brazil and six other Latin countries to undo this heritage.

Concerned citizens as well as specialists should read or re-read Black Reconstruction by W. E. B. Du Bois (1935), and quoted by Hanchard. Du Bois advanced arguments similar to Hanchard’s but with less theory and more down-to-earth language: “The true significance of slavery in the United States to the whole social development of America lay in the ultimate relation of slaves to democracy.”