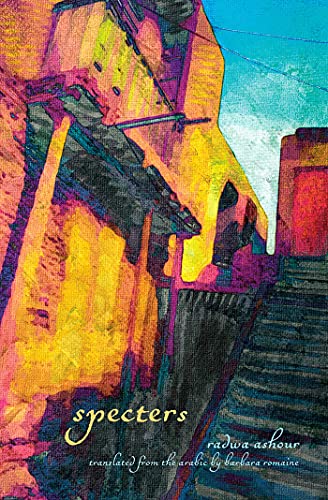 If Specters were as good as its opening line “The valley was full of ghosts” it could have been intriguing, but it is not. The remaining story is a mishmash that moves from first person to third, past to present, young to old, and fiction to nonfiction. Rather than adding depth and nuance to the book, these devices distract from the flow, storyline, and telling of the tale or tales, as the case may be.

Egyptian born and American educated author Radwa Ashour begins by stating that the book is about two women born on the same day: herself and another woman she calls Shagar. Shagar’s life is summarized in the first five pages, with more details interspersed throughout.

One of the more enlivened and affecting scenes is when Shagar meets a new teacher in sixth grade, Fawzi, who tells them to “Ask and think.” He disappears suddenly, and Shagar learns from his family that he was arrested, most certainly for having such revolutionary ideas as to tell his class to question and think about what they are taught or believe. There is also a nice connection between Shagar and her grandfather, especially when she becomes a full professor at the university and takes out a notebook he left just for her, upon his death. It has special significance, because he, too, was a teacher and always believed in her.

At times, it is difficult to know whether it is Ms. Ashour speaking about herself or about another slice of Shagar’s life. The author has conversations with the character she has created and discusses her internal dialogue about what Shagar would say or think and what direction she should take the story. She says, “I write by a process of association, and leave it to the pen to move like a shuttle between the past and the present. ” This in itself is distracting and is something that should be in an essay about writing, rather than a novel. Because the book is equal parts autobiography, history, and fiction, it never really catches hold and envelops the reader in one world or another.

On the other hand, if you are interested in another perspective of Egyptian and Middle Eastern society, family life, politics, and history, told with insight, passion and corroborating research, then Specters might be of more interest. Ms. Ashour repeatedly uses landscapes, architecture, pillars, gates, walls, and roads to effectively speak about current and past events that occurred in the locations she describes. These include protests, deaths, arrests and various conversations and interchanges. In this respect, there are times where readers may feel like they are growing up in Egypt themselves and hearing and learning about life from their own family, teachers and friends, because of the intimacy with which the author writes.

If you’re looking for something that takes you out of the ordinary and doesn’t fit into any specific genre, then Specters may catch your fancy, but if it is a novel or work of literature that you seek, you would be advised to look elsewhere. Radwa Ashour’s creation most closely resembles a memoirist’s collection of history, biography, autobiography, philosophy, and personal journaling.