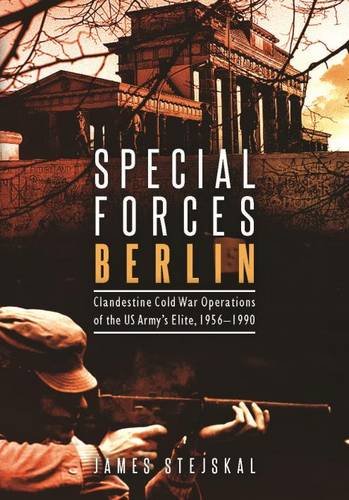 “this book shows, for the men serving on the front lines next to the Iron Curtain, conflict was always a real possibility that could happen at any time.”

The end of the Cold War has been a boon for military historians trying to chronicle the unusual nature of that conflict, especially in Europe, where two nuclear armed military alliances faced off across the German border for nearly 50 years.

This unit history tells the story of a once highly classified clandestine Army Special Forces unit stationed in the flashpoint of the Cold War, West Berlin. For today’s readers, the post-World War II division of Germany, symbolized by the Berlin Wall, is a subject of historical curiosity, but from the mid-1950s this unit was stationed in one of the most dangerous places in Europe, a small outpost of Western democracy in a sea of Communist dictatorship.

The unit had what could rightly be called a suicide mission. In the event of a Soviet led invasion of Western Europe, these Green Berets were to break out of West Berlin into the East Germany countryside and conduct guerrilla warfare by finding, training, and aiding dissident forces to harass and delay the expected Soviet juggernaut.

The problem was, as post-Cold War documents and research show, there was no such thing as an East German dissident network thanks to the ruthless work of the Soviet and East German secret police. The 100 men in the unit would have literally been trying to conduct guerilla operations with an indifferent or hostile population in the middle of nearly 500,000 armed enemy troops.

Most of the book is a standard unit history laying out the evolution of the unit from its creation in 1955, describing the various training exercises, real world reconnaissance missions team members conducted behind the Iron Curtain, and the numerous interactions with special operations units of fellow NATO allies.  Not exactly the stuff of John le Carré novels, but interesting to anyone fascinated with the small Allied military forces stationed in West Berlin during the Cold War.

The remarkable part of the book comes in the middle section that describes the unit’s role in the abortive Iranian hostage rescue mission of 1980. When the Iranian students seized the American embassy in November 1979, three American embassy personnel were at the Iranian Ministry of Foreign Affairs and were detained there separately from the main group of Americans at the embassy.

When planning for the rescue mission began, operators from the Berlin group were selected to rescue these three Americans and bring them back to the pickup site where they would be exfiltrated with the rest of the hostages. This part of the book is straight out of a le Carré plot as the team actually infiltrated two members into Iran to conduct surveillance on the building where the Americans were held, and assist the small group of American clandestine operators that were staging trucks and other supplies near the capital to transport the larger American rescue force into the city.

This aspect of the hostage rescue attempt has never been properly told and is the best part of the book. In addition, the author describes a second planned attempt after the April 1980 fiasco at Desert One that was only called off because of the 1980 Presidential election and eventual release of the hostages.

The Cold War in Europe is an often overlooked part of American military history because it stayed cold. But as this book shows, for the men serving on the front lines next to the Iron Curtain, conflict was always a real possibility that could happen at any time. Their sacrifice and service helped ensure the eventual collapse of communism in Eastern Europe and the peaceful reunification of Germany.