The Spartan Dagger: A Novel 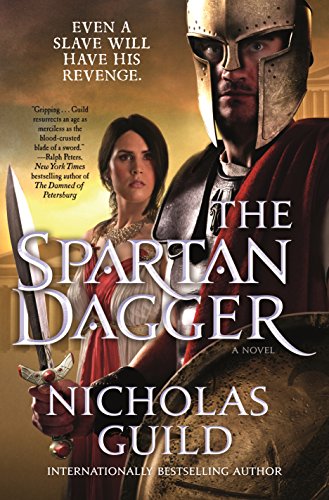 “a beautiful epic of the meaning and misinterpretation of honor and bravery, and the triumph of will over power . . .”

On a night in Ancient Sparta, the lives of two men are set.

One is a Spartan, sent with his twin brother to prove himself a man by killing. The other is a Helot slave seeing his family murdered. The boy, Protos, slays one of the brothers with his own dagger, then challenges the other to a duel. The surviving twin, Eurytus, runs away.

Protos the slave now has a new purpose in life: Revenge, upon Eurytus for the death of his family, upon the Spartans for subjugating his people.

At first, he questions this:

“What sort of people were these who made a game of murder? He would kill them all if he could.”

From that point on, Eurytus’ life is tied to Protos’. What the Helot slave does greatly influences how he himself acts. When he hears Protos has been captured, he rejoices; when he learns the slave again escapes, he’s disbelieving. As it happens again and again, Eurytus comes to believe Protos is invincible.

“‘. . . he is not a coward nor is he a buffoon. He knew what we would do before we did ourselves, and now they are all dead and I am alive only until he decides to kill me.’”

For the rest of his life, Eurytus will bear the shame of running from a slave.

“There was in Eurytus’ eyes that resignation which is perhaps the best part of courage. He would hunt his most fearful enemy because honor demanded it . . . If he survived, he would be washed clean of his shame and if he died . . . Well, how was his life now better than death?”

In the midst of their public and private wars, both men find love but their experience diverges.

Protos meets an Egyptian woman. Nubit sees the future and knows she’ll have Protos for only so long. She teached him to read and write, making him more of a contradiction, an educated warrior slave.

Eurytus is less fortunate. Enamored of a Helot slave woman, when he reaches marriage age she’s taken away, and he enters a loveless and childless Spartan union.

The escaped slave isn’t unstoppable, merely observant. He notices things others don’t and that enables him to survive. He’s a natural warrior, with an inherent skill in handling a blade. It’s these traits making him indispensable to those in Thebes where rebellion is fermenting.

At last, the Spartans decide assassination is the only way to rid themselves of this determined enemy, and Eurytus volunteers to lead the way . . .

“We each have a debt to pay—not to each other but to the ones we lost. For both of us it is a choice between death and shame, and I will not be shamed again.”

This is a story contrasting two cultures and how they influence the lives of the two men whose story evolves. Eurytus sees death as a glorious honor, Protos as the necessary result of his revenge, while Nubit, the onlooker, sees it as the pathway to true existence.

In their odd association, the two men form a bizarre relationship, beginning as antagonists, at one point sharing the closeness of friendship, then again facing each other over the blades of their swords.

“It seemed at last that the only victory for either of them was to end it with each respecting the other, as equals.”

Without realizing it, each becomes like the other . . . Eurytus recognizes the injustices placed upon the Helots by the Spartans. In some ways, he admires Protos, occasionally thinking how empty life would be without him. Protos in turn, becomes near-Spartan in the unemotional way he deals in death. Though mentally suffering afterward, he regards it as the necessary end to his vow of vengeance.

“What had it all meant? Revenge was empty. Some debts could never be paid. Men can do wrong and believe it right.”

The Spartan Dagger of the title becomes the symbol of each man’s regard for the other—Eurytus’ twin brother’s blade that kills so many of his countrymen leads Protos full circle to where it all began.

If there’s any criticism of this novel, it’s that it doesn’t have a true ending.  Protos may get his revenge, but his life can never lead to an acceptable peace. His name means “destiny” and he travels toward it with dogged determination, forced forever to rally on the side of the oppressed. Protos’ story is an unending one and in it, author Guild has written a beautiful epic of the meaning and misinterpretation of honor and bravery, and the triumph of will over power.