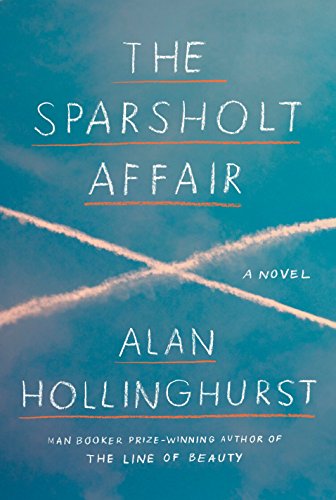 Alan Hollinghurst’s novel, The Sparsholt Affair, presents a bit of a conundrum. Written in five parts, it begins with a first person account by Freddie Green during World War II at Oxford. Here Freddie introduces the initial characters: David Sparsholt and Evert Dax, although several others wander through the story as it progresses.

David Sparsholt is 17, and his goal is to be an RAF pilot. He is handsome and fit. Evert Dax is older by a few years, he is gay, and he falls in love with David. During this time, David remains more on the fringes of friendship with Freddie’s close-knit group, yet he recognizes an opportunity when he is charged 20£ for a transgression, and he does not have the money to pay the fine. Evert, however, does, and David enters into a brief encounter with Evert, who gives him the money.

In the second part of the story, point of vew goes to third person. David has married and has a son, Johnny, who becomes the main character for the rest of the story. Johnny is an introverted, artistic young man who begins to accept the reality of his own sexuality and his attraction to other males. His particular attraction is to a guest at his family’s home, Bastien, who is two years older. The relationship is not successful, except to further raise Johnny’s awareness of his desires. A backstory in this part finds David in a budding relationship with a friend, Clifford Haxby.

It is several years later and as Johnny’s skill as an artist continues to grow when he encounters Evert Dax, now a well-known celebrity. Johnny is drawn closer into the world of homosexual life through his acquaintance with Evert. As the son of David Sparsholt, a successful businessman and clearly remembered by Evert, Johnny is easily accepted into the “family” and his gay encounters thrive.

It is midway through the book when the rumors about his father, David, and the awful “Sparsholt Affair,” begin to surface. Hollinghurst drops little crumbs of this affair and how salacious it was at the time, and yet the details are sparse, at best.

Throughout the remainder of the story we follow Johnny as he grows and becomes a well-known artist in his own right. A lesbian friend and her partner want to have a child and pick Johnny to be their donor—a reluctant one, but one nonetheless. As a result, Johnny finds himself a father, a role that at times is uncomfortable, but one that he accepts fully.

Johnny finds love and marries Patrick, and they have a comfortable life together. And yet the hints about David and the Sparsholt Affair continue to swirl around as friends and acquaintances frequently question him. Johnny has lived with the stories of this event for several years and feels no embarrassment about them. They are just part of his life.

Patrick dies, Johnny ages, new homosexual affairs feed his desires, and yet at the same time dash his hopes. David dies and Johnny must come to terms with his often-failed relationship with his father.

Throughout the story, Hollinghurst continues to drop hints—a homosexual affair, illegal events, prison time—and still he leaves so many unanswered questions. The affair is never fully discussed or disclosed. However, backing away from the story and taking a wider look at it from a distance, one can only think that whatever the details of David’s affair were, the bigger picture is not the sexual/illegal events that people relished reading and talking about, but rather the sequence of events that occur throughout the book, allowing us insight into Johnny’s life and how he relates to the people who wander through that life. Perhaps the Sparsholt Affair is Johnny’s life, not David’s event.

Hollinghurst’s writing style is picturesque. He writes long, complex sentences, but sentences that draw the reader in, so the reader actually lives the story—doesn’t just read the words.

The Sparsholt Affair is a fast read and will keep the reader’s attention from beginning to end. An enjoyable read.