A Spark of White Fire (The Celestial Trilogy) 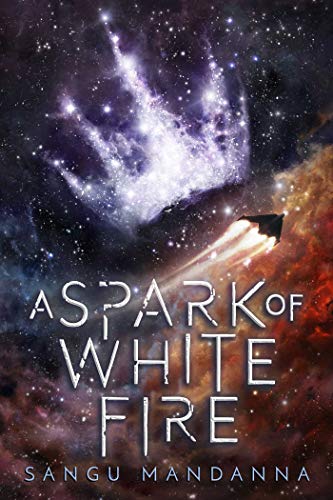 Esmae is born cursed—destined to destroy her mother’s kingdom that her twin brother is to inherit. In an attempt to avoid the downfall of kingdom-planet of Kali, newborn Esmae is jettisoned into space, alone, to die. The gods intervene, however, and on the fateful day her brother is to compete in a tournament that will win him a sentient, unbeatable battleship, Esmae bests him and wins his prize—setting off a chain reaction that will set brother against sister, mother against child, and change the fate of two worlds.

A Spark of White Fire seamlessly blends space opera and fantasy into an enthralling and utterly mesmerizing story about a pauper princess, a sentient warship, and a royal family caught up in an endless battle for the throne of a floating kingdom-world. At its base it is a science fiction retelling of the Mahabharata, but with enough trappings of “standard” fantasy and space opera fare to appeal to even the most trope-loving reader.

The narrative is brisk, emotional, and humorous. The pacing never lags, even as the story is set up in the introductory chapters, and the inciting incident of Esmae and her magic bow hooks right from the beginning. Her journey from poor orphan to princess is a comfortable trope that still elicits deep emotion, and Esmae’s trials never seem cliché. The atmosphere of the narrative, as well, is perfectly balanced between space battles, starships, and towns on cobblestone streets, where

“Air vents and temperature systems lurk under gnarled roots; thorny gardens are nurtured by chemicals to grow real fruit; tech screens and fingerprint scanners are tucked under wood and pebbles. It looks like a place where witches steal woodcutters’ children from their beds, where gargoyles come to life when the nights grow dark, where headless ballerinas dance in the forests.”

The characters, in particular, shine. Of particular note is the sentient warship Titania, whose plight is perhaps the most human of any of the characters, and whose humor sands down the raw emotions of the charged travel scenes. Her friendship with Esmae is the easiest and most natural in the story, although Esmae and Sybilla’s tepid (early on) friendship is also remarkably intuitive.

There is only the faintest hint of a love triangle in this book, a trope all too common in young adult fiction, and which can either drive a narrative or bog it down. Neither happens in this book, and the triangle is merely background seasoning in an already robust story.

As the first book in a trilogy, A Spark of White Fire stands alone well as a compelling introduction to the Celestial Trilogy. The interaction of various gods give the reader enough of a hint as to the remaining story line that no true cliffhanger comes about, yet there is plenty of motivation to follow Esmae on her path of revenge.

The book also contains strong diverse representation, from numerous characters of color, to representation across the LGBTQIA+ spectrum. Although the main romance line with Esmae is heterosexual, there are numerous in-world same-sex pairings, including Esmae’s twin brother, Alexi (noted in text as being bisexual) and Esmae’s bodyguard, Sybilla, who is presented as preferring women.

A Spark of White Fire is a fresh, comfortable space opera with delicious fantasy notes and strong diverse representation. It has few peers in modern science fiction/fantasy literature, yet maintains enough well-loved tropes keep readers grounded as the narrative skips seamlessly between genres.