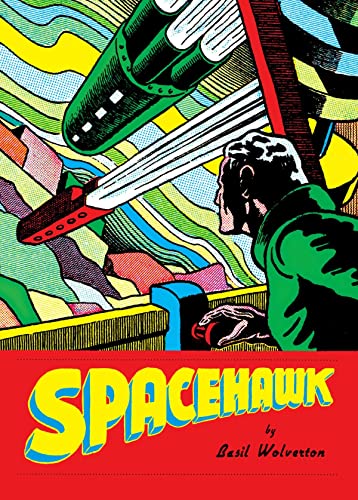 The imaginative worlds he brought us were perfectly framed. Yes, there was a lot going on, but Mr. Wolverton kept his worlds and all the action found in them tightly organized inside the confines of the emerging comic book art form.

At the time Spacehawk debuted in 1940 comic books were still brand new. As the artists and writers were learning the format, so was the public. Almost all the action stays within the panels where the lines are clear, organized, and balanced.

At first look his work might appear simplistic. But on close examination each panel he drew reveals itself as a construction that holds grace, beauty, balanced geometric figures, and deliberateness that others in the field hadn’t yet learned. Each panel is in perfect service to the environment being created.

While he didn’t draw with the stylish and sleek feel of Buck Rogers or the wild beauty and precision of Alex Raymond’s work on Flash Gordon, Mr. Wolverton reveals his work on Spacehawk to be beautiful, captivating, and just as individualistic as either of those strips.

When Superman first appeared in 1938 the public response was immediate. As the next few years rolled by both established and new publishers raced to capitalize on the public’s sudden fascination with comic books.

Target Comics, the home of Spacehawk, was owned by Novelty Press. They were owned by the very same company that also published The Saturday Evening Post. Itching to make the big money comics were bringing in, Novelty needed heroes, and they needed them quick. Mr. Wolverton brought them Spacehawk and for over two years and over 30 adventures, Novelty had a hit.

As his son Monte Wolverton (a respected artist and writer who, like his father, has had his work appear in MAD and many other magazines) relays inside his introduction, Basil Wolverton had the idea for a space hero in the back of his mind since at least 1929.

Over the next few years various incarnations of the idea appeared in multiple publications. Still it took nearly 11 years for the character we know today to appear in Target Comics in the Volume 1 #5 cover dated June 1940. The groundwork he had laid over the last decade enabled Mr. Wolverton to display his amazing vision right from the beginning.

The first nine stories take place in space. Evidence of Mr. Wolverton’s long-range plans for the character are obvious as he doesn’t even show us the hero’s face for the first few stories.

Mr. Wolverton portrays space and the future with a precision that other artists who were working quickly to cash in on the craze avoided. His brightly colored forays through space and the interplanetary landscapes he creates match the best of what we see today. He has a clear vision of what good science fiction can show us. But he also wraps it up with some crazy looking monsters and utterly gross aliens.

Inside the second adventure, Mr. Wolverton places his Neptunian hero inside a tilted chair that has a TV screen in front of him. Modern readers easily recognize the set up as something from Total Recall or other modern sci-fi films.

His attention to detail is astounding. The patch cable at the bottom of that TV screen, which originates from a source outside of the chair itself, looks exactly like a patch cable for a modern computer!

After the first nine stories, each one set deep in space and filled with stunning interplanetary landscapes and design, Novelty’s management stepped in and asked Mr. Wolverton to bring Spacehawk to earth. They wanted him to fight the growing world menace.

Deprived of the canvas of infinite space, the stories can taper off a bit as the book nears the end, but with Mr. Wolverton’s incredible style constantly on view, every single page is worth our time.

At the same time, Mr. Wolverton’s amazing sense of humor really begins to shine. A loose conglomeration of Hitler and Mussolini, his brand new villain Moosler is so odd-looking that could have easily found a place in Todd Browning’s 1932 film Freaks. As it was when Spacehawk was first fighting in space, the artist’s sense of the absurd is on full display. Just like the aliens he first fought, Moosler is a measure of absurdity inside an easily recognizable reality.

Knowing that patriotism was moving books, you can almost hear the publisher giving Mr. Wolverton notes when the dictator Herr Nitwiler shows up complete with his bad haircut and chopped moustache.

Basil Wolverton rises to the occasion and gives the reader a detailed and hilarious look at megalomania while throwing in some fantastic aerial fight scenes.

Few other artists in the history of comic books had the ability to mix beauty, ugliness, shapes and geometry in the same way Basil Wolverton did. This is art that Roy Lichtenstein must have been secretly reading when he was 16. With Spacehawk in the back of his mind, 25 years later he was ready to lead the modern celebration of Pop Art.

Fantagraphics Publishing brings Wolverton’s art to the reader in as detailed and perfect a form as possible. Each wave of space, every geometric shape and all the incredibly ugly aliens look better than they ever have in their entire lives. This is an oversized book that holds over 260 pages of pure artistic and comic bliss.