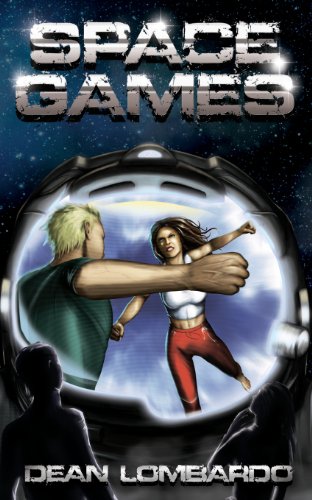 “Reading Space Games is kind of like watching a cage fight. . . . what a rush!”

Man versus woman competition rockets into orbit in Space Games—and a good spirited Billie Jean King versus Robby Riggs tennis match this is not.

Muscle-bound meathead and gym owner “Big” Joe O’Donnell is aptly described as a Neanderthal, and he takes pleasure in hitting a woman in the face when the show gives him the green light. The winner of their best of seven athletic or strategy game competition gets $3 million and a bevy of sponsorships.

Space Games isn’t a battle to the death like Hunger Games, but it might as well be the way the contestants are at each other’s throats, and it’s much more violent and sex infused. Both Robin and Big Joe use not just their fists to inflict damage, but sexual humiliation as well. They repeatedly cross the line, and Zimmer is all too happy to broadcast it to the world without stepping in for their safety.

It starts with Joe teasing Robin over her bouts of nausea. She responds by blasting him below the belt and trying to flush his head down the toilet. Uh, a slight overreaction? Joe is so incensed that a woman got the best of him on camera that he bites her ankle, and things escalate from there.

It becomes clear that not only are millions of dollars at stake, but one or both of these combatants may not make it back to earth alive. Mr. Lombardo doesn’t cast either combatant as a hero. Robin comes from an abusive family history, so there is some sympathy for her behavior. Joe has no excuses, except that he must defend his macho pride. In most circumstances, I’d root against either of them, it’s just who’s the least evil and sadistic. (Sounds like a political race.)

Even the astronaut/referee Vince is hapless and unable to stop the contestants from nearly killing each other every day. Zimmer has no morals and the profile of the biggest “Space Games” fan shows its viewers have even less. Anyone who criticizes the show for being too violent or sexist is labeled a feminazi.

It’s a matter of which bad guy, or girl, gets the last laugh. It’s worth tuning in to find out.

The competition is intense and exciting. From basketball in minimal gravity to a race up and down a ladder to doing laps outside the station in a space walk, there are plenty of thrills. Even poker was fun. Zero G dancing, while it sounds like a great idea, dragged a bit.

Like any good reality show, Space Games leaves us wondering what the contestants would do next and how they could possibly top the last bone-breaking outburst of brutality. The ended goes to a pretty dark place—the worst nightmare for any TV producer, except Zimmer.

Reading Space Games is kind of like watching a cage fight. Yeah, it’s violent. Yeah, someone could wind up unconscious or in the hospital. But what a rush!

At least this game hasn’t become reality—not yet anyway.