Soviet Judgment at Nuremberg: A New History of the International Military Tribunal after World War II 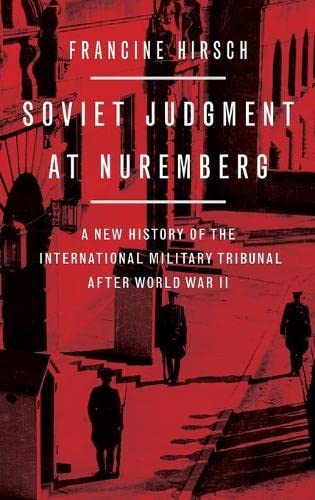 “the more complete story of the creation of the International Military Tribunal (IMT) can now be told . . .”

In the wake of World War II, the victorious Allies grappled with how the leaders and institutions of Nazi Germany should go on trial for war crimes. For the first time in modern history, the vanquished leaders of a country were called to answer for starting an “aggressive and unprovoked war” and carrying out “crimes against humanity,” two nebulous terms in 1945 that were to have far-reaching consequences into the 21st century.

In this fascinating new book, the more complete story of the creation of the International Military Tribunal (IMT) can now be told, with the author’s amazing access to numerous Soviet and Russian archives allowing a more nuanced and intriguing story of how this unprecedented international effort to bring to light the full range of Nazi atrocities evolved.

From the beginning, the Western Allies struggled with ensuring that the efforts of the IMT were not seen merely as a measure of “victor’s justice” while still highlighting the methodical evil of the Holocaust and the desire of Hitler and the top Nazis to wage an offensive war of conquest across Europe. The Soviets had no desire for anything more than a kangaroo court similar to the great Soviet show trials of the 1930s since there was no doubt to the Stalin regime that the Nazis were guilty of numerous war crimes. In addition, the Soviets had other motives for conducting a very public trial—to highlight to post-war Europe the Soviet contribution to the defeat of the Nazis, including over 20 million dead, and the justification for massive reparations from occupied Germany to help rebuild the shattered Soviet economy.

However, the Soviet efforts to universally condemn the Nazis were marred by their own aggression and war crimes, in particular the secret protocol to the 1939 Nazi-Soviet non-aggression pact that led to the dismemberment of Poland between Germany and Russia, the Soviet attack on Finland in 1939, and the 1940 murder of over 11,000 Polish military officers and other intelligentsia by the Soviet NKVD secret police under Stalin’s orders.

When the mass graves of the Poles were discovered by the Nazis during their invasion of Russia, Stalin was quick to cast the blame on the Nazis, even directing the NKVD to plant evidence when the area was recaptured by the Red Army during their drive to Berlin.

The Soviets had other acts they wanted to minimize or keep secret, including their seizure of the Baltic States in 1940, and their de facto alliance with Hitler prior to the Nazi invasion. All of these coverups were a key part of the Soviet legal strategy that became at risk as the Allies allowed the indicted Nazis to testify, call witnesses, and present documentary evidence.

The political and legal intrigues between the four victorious powers are described without bogging down into too much minutia and Supreme Court Justice Robert H. Jackson, chosen to be the lead American prosecutor, really stands out as the driver of ensuring that America’s legal and political goals were met, deftly out-maneuvering the woefully unprepared Soviet delegation.

The Soviets were totally ill-equipped for the scope of work involved in the trial, particularly the mountains of documentary evidence seized by the Allies during the dying days of the Third Reich, and their lack of understanding of the true nature of the IMT allowed not only the other Allied powers to drive the proceedings, but in some cases allowed the Nazis on trials to score critical legal points detrimental to the desired Soviet political outcome of the trials.

The overall outcome of the IMT was never really in doubt, and the leading Nazis were all found guilty and executed or committed suicide; however, many of the lower tier Nazis, particularly the generals and admirals, were found guilty of lesser crimes and received prison sentences, many of which were commuted far short of their original length. The increasing shadow of the Cold War, especially Winston Churchill’s “Iron Curtain” speech and the nascent Truman Doctrine and Marshall Plan soon ended any plans to continue large-scale trials of German industrialists that were desired by the Soviets.

The IMT did launch the first international discussions on human rights, what constituted a war crime, and the notion of aggressive war as an international crime answerable to a world legal body. But the ensuing Cold War, with its challenges to national sovereignty and ideological confrontations minimized the potential of a permanent version of the IMT in the United Nations until the fall of the Soviet Union in 1991. Even though the IMT did not meet all the Four Power’s desires, it did pave the way for today’s International Criminal Court to try war crimes, genocide, and crimes against humanity, and perhaps this is its lasting legacy.