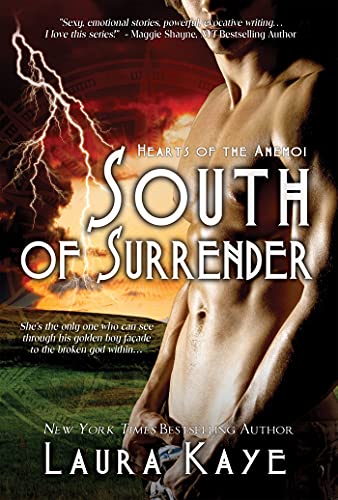 Chrysander Notos is one of the Anemoi, a god of the winds.

Caught in the middle of a brawl between the Olympian gods and his family, he’s been assigned to track down and capture or kill his eldest brother who has gone insane. Unfortunately, the brother has come into possession of an almost invincibly powerful talisman that makes him hard to catch and harder to kill.

During one especially pitched battle, Chrys is injured and plunges to earth, crashing through a horse stable.

The stable belongs to Laney Summerlyn. Though she is slowly going blind, she lives on her own with her horses. She finds the injured god, binds his wound, and captures his troubled heart.

South of Surrender is a fast-paced thrill ride of a book.

The characters are fairly well drawn, from the equally strong male and female leads to Laney’s close friend, Seth, and Chrys’ various family members. It was interesting to read a story based upon the Olympian gods, and even more refreshing that they weren’t major gods.

Laura Kaye definitely did her research in mythology (why a single god, Mars, was referred to by his Roman rather than his Greek name wasn’t explained—perhaps that was in one of the earlier books in the series) and it shows. A purist won’t find a lot to argue with and might learn a thing or two.

It was also refreshing to find a heroine who is imperfect but strong nonetheless. Laney is no wilting flower, despite her handicap. The interactions between the hero and heroine aren’t a mushy sop—both are strong-willed and sometimes funny. Though Chrys is perhaps predictably “damaged” by paternal mistreatment when he was young, he doesn’t use it as an excuse or crutch, and thank God, not as a reason to abandon his blooming love.

This is the third installment in Ms. Kaye’s Anemoi series, but she does a nice job of sketching what is necessary to know from the first two books. Her secondary characters are interesting, and all seem as strong as the leads in this story, making it tempting to go back and read the first two titles.

As a modern romance, South of Surrender has the requisite sex scenes. Some are quite intense, taking the novel to the point of erotica. All can quite comfortably be skimmed as they aren’t necessary to support the narrative.

The familial relationships in this novel are quite reminiscent of J. R. Ward’s Black Dagger Brotherhood series, which could be a good or bad thing. When done badly, linking characters in that manner can be ridiculous; thankfully, Ms. Kaye does it well. Strong men, not overly mushy, paired with equally strong women make the story believable.

The author’s only missteps are in the language and one aspect of sexuality: a plethora of modern curses and words like “dude” ring oddly coming from age-old gods, and Chrys’ constant erection whenever he comes into contact with Laney becomes funny after a while. Again, an age-old creature isn’t more controlled than a spotty teenager? Come on.

Ms. Kaye is a good writer, creating a strong storyline with interesting characters. Her narrative is compelling, even without the sex. This is a book well worth a beach read or a poolside daydream.