South of Nowhere: A Mystery (A Julia Kalas Mystery) 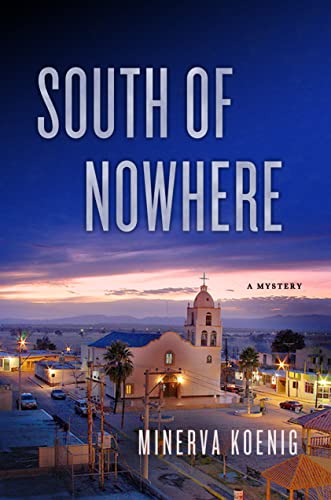 A fascinating mystery set in the dusty Texas outback featuring a short, slightly overweight, cynical female sleuth who is as tough as boot leather and as determined as any gumshoe crafted by Raymond Chandler, South of Nowhere by Minerva Koenig is Texas noir at its best.

Reformed criminal (17 years of running guns and laundering money) Julia Kalas was in witness protection after an altercation with the Aryan Brotherhood until she and the Feds had a misunderstanding involving the mysterious death of her keeper.

No longer under the protection of the U.S. Federal Witness Protection Program, or WITSEC,  Julia lives in Azula, Texas, a jerkwater town a few hours north of the Mexican border, where she is trying to start a construction business while coping with PTSD resulting from being stabbed by a woman who lacked a firm grasp on reality.

“My gut has always run several lengths ahead of my conscious thought process, so I’m used to a certain level of intellectual vacancy, but this was different. . . . The brain wasn’t even loading into the starting gates anymore.” Finding a body under the warped floor of an old house she hopes to rebuild is not conductive to avoiding “that familiar lurch of high, cool nothingness, and my mind turned off like someone blowing out a match.”

Dr. Liz Harmon, who serves as Azula’s coroner when she isn’t treating live patients, wants Julia to see a shrink. Julia refuses to consider it, since she would have to reveal her past history, not a good idea if one hopes to avoid a fatal date with the Aryan Brotherhood.

Azula police chief, Benny Ramirez, is naturally suspicious of what part Julia may have played in the body’s residing under the floor in the first place. Not that Benny believes in his heart that Julia is a murderer, but she does have a propensity for being in the vicinity of corpses.

Since Benny is disinclined to arrest her (yet), Julia returns to her apartment on the second floor of Guerra’s Bar where she works part time. Technically speaking it’s not her apartment, but belongs to her lover and owner of Guerra’s, Hector Guerra. Hector has been absent without a forwarding address ever since he and John Maines, a former Azula county sheriff, disappeared into Cuba. Julia knows Hector is still alive because checks for expenses and payroll arrive at the bar every month.

Still curious about both the whereabouts of Hector and the identity of the body so inconveniently buried under her property, Julia is surprised when John Maines suddenly appears on Azula’s dusty street. Claiming to not know where Hector is, John offers Julia a job. Now a private detective, he is looking for a woman who went to Mexico for medical treatment and disappeared. John offers to get WITSEC to release $51,000 the agency owes Julia if she will help him find the woman.

Julia decides that getting out of Azula before Benny Ramirez decides to charge her with murder or whatever on the general principal that she stumbles across too many dead bodies, and besides, she is not only his best suspect, she is his only suspect. And $51,000 will last a long time in Mexico. She packs her bag, and she, Maines, and his brown-and-white mutt, Steve, head for Mexico, and straight into a variety of dodgy enterprises, including human trafficking, a gang of women whose intentions toward Julia and Maines are deadly, and the long absent Hector.

South of Nowhere is thrilling, action-packed, and offers an authentic setting that is likely unfamiliar to most noir fans. Instead of grimy streets, Koenig offers the reader a  glimpse of “The rolling, rocky landscape of Azula County gave way to flatter, softer, brush country after a while, covered in long brass colored grass and dotted with puffy chartreus mesquite trees. It always killed me, what they call ‘trees’ in Texas.” So vivid is the descriptive narrative that one can almost smell of dust in the air, and feel the sweat rolling down your back from the blast furnace-like heat.

In addition to her first-rate humorous writing style, Koenig also creates a female sleuth who is not lean or particularly athletic, doesn’t drink tea, or do yoga. Julia Kalas is more like the average woman if the average woman is a former criminal, slightly plump, and moderately proficient with firearms.

A minor weakness in the plot is the fact that the very nasty man behind all the felonious activity along the border is not introduced until late in the story, so the ending seems more a summary than a fully developed conclusion. Still, this is worth at least four stars out of five.