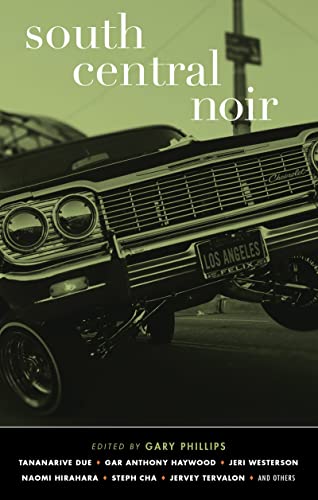 Editor Hamilton rightly claimed that the collection “brought the ethos of Chandler and Cain filtered through a contemporary lens, showcasing some of the most innovative and celebrated writers working today.”

Now comes South Central Noir, a collection that focuses on one neighborhood of L.A. In this case, “neighborhood” is a bit of a misnomer since South Central, or South Los Angeles, as it’s officially known, is home to about 300,000 souls. The geographic constraints do nothing to limit the imaginations of the 14 writers, including entries again from Hirahara and Phillips, who edited this anthology. In fact, Phillips grew up in South Central so it’s only fitting he gets another turn.

A book review is no place to attempt a recap of the population shifts in South Central over the past century or so, but Phillips’ colorful introduction references the area’s “infamous reputation” even while acknowledging that “the majority of the residents work hard and share many of the same concerns as those who reside in Westside neighborhoods. It’s a place where the demographics and physical characteristics have changed since my youth, where even gentrification has crept in.”

Steph Cha kicks off South Central Noir with the sharply-told “All Luck,” about Korean liquor store owner Sang-woo. He keeps a gun behind the register “because it was stupid not to.” The neighborhood is on fire “after the verdict came down.” Businesses near Sang-woo’s shop are ablaze, but his has been left alone. Sang-woo is perplexed but decides not to open up for business. “All his paying customers would be waiting out the chaos at home.” Cha’s brisk, feisty tale is built on hopes, dreams, and a big-time gamble that shines a bit of hope amid the grime and smoke.

Gar Anthony Haywood takes full advantage of the famous Watts Towers in “All That Glitters.” This is classic storytelling with a nifty premise and a sweet payoff worthy of O. Henry. Eric is hired as a security guard at the towers, which he equates to being paid to make sure that “nobody made off with the doorknobs at Motel 6.” What’s there to steal from the interconnected sculptures of steel rebar? Eric is aware the Watts Towers are a site for gang battles but it’s the “certifiable crazies” that worries him the most. Told in a story-within-a-story style, “All That Glitters” is a gem.

The supernatural shows up in Jen Westerson’s “The Last Time I Died.” Emory Holmes II takes us back to 1935 and the glory days of the famous Dunbar Hotel in “The Golden Coffin.” And Naomi Hirahara’s winning entry “I Am Yojimbo.” features the well-known Kokusai Theatre and the night of its last-ever movie screening in 1986. Hirahara’s tale is told from the perspective of 14-year-old Eric, “the least street-smart boy in Crenshaw,” and involves a stolen VCR tape that attracts all sorts of trouble.

Robert Lovato’s gritty “Sabor a Mi” gives us private detective Roque “Rocky” Anaya as he ponders how deep to dive into the grisly murder of a Salvodoran man who has been hacked to death with a machete. It’s 1:00 a.m. It’s raining. Rocky is listening to “sweet bolero love songs” inside his beat-up Toyota. Lovato is tired of getting assigned the “Latino cases.” Worse, the victim is someone he knows. As with many passages throughout South Central Noir, Lovato gives us character and setting synced up as one:

“He looked eastward, toward the gigantic projects stuck between the warehouses and small factories that LA’s powers that be squeezed into the eastern part of South Central. Slauson Park, where Arnulfo was killed, stands out as a green patch in the gray and black lines of concrete, prison stripes coloring the satellite maps of South LA. Different parts of the scenery—the tropical rain, lots overrun with weeds and graffiti, La Resurrección church, the industrial warehouses and small factories, railroad tracks, the general browning of South LA—give Arnulfo’s machete, murder a sultry, sad Salvadoran feel. Sometimes, LA itself feels very Salvadoreño, a dark, ugly feeling Rocky rejects as if it were a gun in his gut. But the comparison is limited. War is war. Even during the worst of the ‘92 riots here, weeks and months in LA never came close to a single day of absolute terror in El Salvador.”

South Central Noir is another fine collection in the venerable, admirable Akashic Books series. And if the editors are willing to subdivide every city they have already visited, then we lucky readers of all things noir have decades of enjoyment ahead.