The The Sound of Things Falling: A Novel 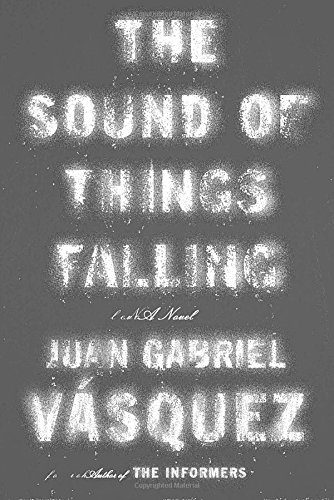 “Mr. Vásquez weaves together memory and imagery into a seamless whole.”

Antonio Yammara, a young law professor from Bogotá, watches a news report about an escaped hippo from the derelict zoo of drug kingpin Pablo Escobar. The giant animal is killed, and this triggers Yammara's memories about the times he spent with Ricardo Laverde, who died in 1996.

Thus begins The Sound of Things Falling by Juan Gabriel Vásquez (translated by Anne McLean). Laverde and Yammara used to play games of pool together until his murder by an anonymous assassin perched on a motorbike (the modus operandi for the Colombian drug cartels).

Prior to his murder, Laverde had listened to a tape recording of a commercial aircraft's “black box.” The aircraft had carried his estranged wife Elena Fitts until it crashed among the fog shrouded peaks surrounding Bogotá. Yammara, in a perverse violation of Laverde's privacy, also listened to the “black box” recording.

These events, which later expand and then curl in on each other, chronicle the ups and downs of modern Colombia. Over the decades, Colombia has been fractured and bled white from drug wars, guerrilla warfare, and political corruption. During one of their pool games, Yammara asks what Laverde did for a living and why he was in jail. Laverde doesn't answer why he was in jail, but he said he was a pilot.

Aircraft and air disasters weave throughout the novel. While one could place this under the subgenre of fiction about the War on Drugs, The Sound of Things Falling would be a peculiar entry. Unlike Cormac McCarthy's No Country for Old Men or Roberto Bolaño's 2666, this is a novel with a relative lack of violence.

Instead, the violence bubbles up in what people say or don't say to each other. Characters reminisce about where he or she when so-and-so was assassinated or when this or that bombing occurred. Violence is the scar tissue of everyone's memories. It is inescapable.

Antonio Yammara becomes the third victim, grievously wounded during Laverde's assassination—this on top of Helen Fitts's plane crash death. Yammara, injured while his wife, a former law student, is preparing to give birth to their child. His injuries cause him to suffer from post-traumatic stress disorder and the couple has intimacy issues.

It takes years for Yammara to fully recover and reconnect with society. In the meantime, he tracks down Maya, the daughter of Laverde and Helen. She lives in the Colombian countryside and is a professional beekeeper. After an awkward introduction, he explains to her why he is there, meanwhile negotiating over a finicky phone line with Aura, his wife, that he hasn't left her for another woman.

During their conversations, Maya shows him a box she has kept. It contains letters and other things from her parents. Yammara looks through the contents of the box and pieces together the early lives of Ricardo Laverde and Helen Fitts.

She came from a working class Catholic family and enrolled in the Peace Corps. That brings her to Colombia. She transfers from an isolated peasant family and takes up residence in the Laverde household in Bogotá. Through an extended flashback, the reader witnesses Colombia in the Sixties and Seventies, with protests at US embassies and the drug trade in embryo.

The Sound of Things Falling is reminiscent of The Godfather, Part II, with its long flashback scenes showing the early domestic scenes of Vito Corleone, his wife, and his young children. In these flashbacks, Maya appears as a child and Helen Fitts becomes Elena Laverde. The one-time Peace Corps volunteer becomes a wealthy matron of a pilot involved in the burgeoning drug trade.

Mr. Vásquez weaves together memory and imagery into a seamless whole. Anne McLean's translation gives the novel a looseness, imbuing Antonio Yammara with a detached and damaged persona. Attempting to recover from his injuries, mental and physical, and search for the truth about Ricardo Laverde's murder, the reader learns about Colombia before the plague of drugs and violence shattered the nation.